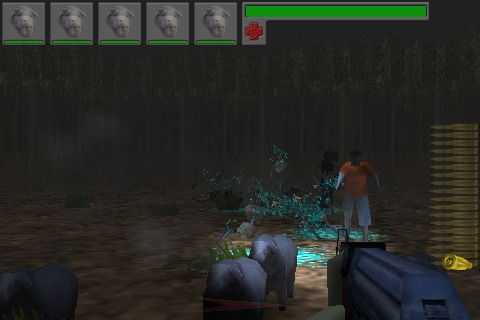 After long delays, Phart Games’s first person shooter Alien Mangle [App Store] finally hit the App Store late last week. For those who haven’t been following the drama in our forums, the game started off as Zombie Mangle but was apparently delayed due to excessive gore. So it was rebranded with aliens, robot sheep and green blood and Alien Mangle was born and finally accepted by Apple.

The rather arbitrary premise of the game is that you must protect your robot sheep from invading aliens. The aliens look suspiciously like zombies and will attack you and your sheep. Armed with an axe or several guns (even grenades) that can be bought in the shop, you must navigate your way from the starting position to the “green zone". Each level is set up as a progressively longer path to this safe area. The game also comes with different modes including Easy, Medium and Hard difficulties as well as Progression (levels) vs Survival modes.

While the plot is not particularly deep, the game itself is surprisingly fun once you get the hang of the controls. The “strafe" area on the bottom left acts as a directional joypad and tilt controls offer left/right/up/down movement. The dark and creepy atmosphere of the game also adds to the feel. For only $0.99, it’s an easy pick up if you have any interest in this genre or just feel the need to mangle some zombies aliens.