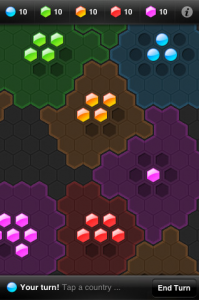 Strategery is a fast-paced game of world domination, designed and built from top to bottom for the iPhone and iPod Touch. Play against the computer or up to four friends in an epic battle of strategy and risk.

Strategery is a cleanly implemented, simplistic iPhone take on Risk, Defender of the Crown, and the like.  It’s a turn based strategy game of map domination that’s well suited for brief sessions of gaming on the go. The gameplay closely resembles Dice Wars.

Featured as listed by the developer:

The playfield consists of a futuristic area map with regions sectioned off by color.  You’re blue.  Each “country" contains one to seven colored hexagons (or circles, in the case of the (blue) player).  These are armies.  Click an area to select it and then click a bordering, enemy area to attack.  In so doing, a roll of the dice takes place and each army of the player’s area and the target area is replaced with a die face.  The highest cumulative count wins–and obviously the area with the larger number of armies is more likely to win.  At the end of each turn, additional armies are added to the various countries based upon the largest unbroken cluster of countries of a given color.

Strategery provides a solid challenge to fans of the genre–it’s no cakewalk, but then it’s not impossible either.  iDrinkApp.com is currently offering the game at a limited time introductory price of $0.99, which turn-based strategy fans will find to be a solid value.

Have a look at our gameplay video to get a feel for the game.