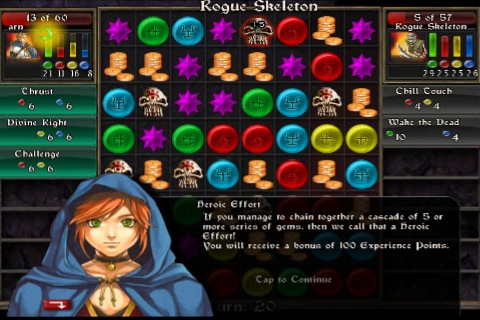 Last week’s release of Puzzle Quest [App Store] was met with mixed reaction amongst our readers. Reactions seem to vary greatly depending on an individual’s previous experience or exposure to the game.

For those unfamilar with the game, Puzzle Quest was originally released for the Nintendo DS and PlayStation Portable in early 2007. The game was very well received and became a surprise hit. Puzzle Quest brings together Role Playing and Match-3 gameplay into a harmonious package. Set in a traditional fantasy world occupied by knights, orcs, wizards and warriors, you must complete quests in order to progress the storyline. Beyond the actual storyline, there are also a number of side-quests that can also be pursued. All in all, the iPhone version is said to offer 20 hours of storyline gameplay alone.

It seems a waste of effort to try and re-review the actual game which has been so extensively discussed over the past two years. Instead, we’ll point you to one of the many glowing reviews of the original game:

If Puzzle Quest were just Bejeweled, it would probably get tedious quickly, but by applying several standard RPG combat conventions to the formula, it becomes something much more strategic. Standard, one-on-one combat is the most common game you’ll play, and it’s also the deepest. You and your opponent, each using the same board, will take turns moving pieces, trying to whittle down each other’s reserve of hit points. Attacks are performed by lining up skull-shaped pieces, though you’ve also got several spells that you can use for both offensive and defensive purposes.

Gamespot also does a good job walking you through the mechanics of the gameplay including the intricacies of the Match-3 battles which require strategic choices in order to prevail. 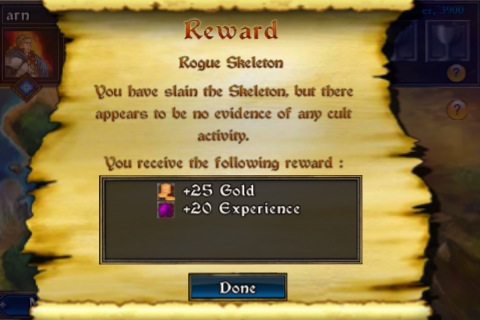 The iPhone version of the game (Chapter 1, $9.99) is a faithful port of what appears to be the first half of the original Nintendo DS version. Transgaming promises that this is the first of a trilogy of Puzzle Quest titles for the iPhone which will also include content from the Revenge of the Plague Lord explansion pack delivered to Xbox 360 customers this year. Transgaming also describes a “downward pricing model" which means the full cost for the entire trilogy should be less than $30.

The main criticism about the iPhone version of the game surrounds the seemingly sloppy efforts to bring the title to the iPhone itself. Many of the graphics are blurry, framerate sometimes slows down, and the text instructions can be difficult to read due to the size of the font (see screenshot above). As a result, fans of the original game are quick to dismiss the game as a clumsy port. The game, however, remains playable, and if you can look past these issues, many newcomers have already fallen for the game itself:

So I bought the game, and have never played Puzzle Quest before. And while I do see all of the negative points people have brought up in this thread about this port of the game… hands-down this is the most fun I’ve had with my iTouch since i got it. I have over 200 games already (a bit addicted to the app store, yes) and this is the very first time i’m losing sleep to play anything on this platform. This one’s a winner in my book, regardless of its flaws.

Perhaps most concerning, however, have been sporadic reports that some players have lost their characters without explanation. Transgaming is said to be looking into these issues as well as one about legibility.

This high quality gameplay video (Full HD version) should provide you with a good look at how the game feels to decide if you’re willing to take a chance given all the issues.