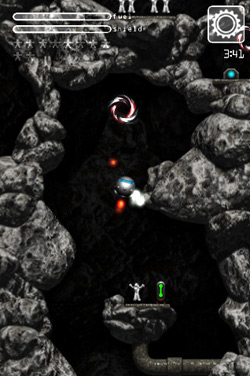 The “cave-flyer" is a unique genre of games that MobyGames well describes as follows.

A so-called cave-flyer takes the 360° control method from the venerable Asteroids, adds gravitation and/or inertia, and puts your ship in a landscape with more obstacles than enemies. The most classic example of the genre is Thrust.

Games of the sort have translated particularly well to mobile devices, thanks to their touchscreen controls (be it finger or stylus).  The iPhone and iPod touch take the genre to a whole new level with accelerometer control that is the natural ideal control method for these gravity-based games.

Big Head Games, as promised, has released what is currently the best cave-flyer available in the App Store: Retro [link].

As the story goes, the humans and their reckless experiments have botched things up and put the sun on a fast-track to supernova.  Unfortunately, scientists are trapped in deep science stations carved into the rock of various moons of the planets of our solar system.  And they must be rescued before the sun begins its catastrophic exodus.

Gameplay involves tilting the iPhone left and right to control the pitch of the rescue craft and touching the screen to activate upward thrusters.  The controls are sensitive and allow the skilled pilot to navigate rather treacherous subterranean mazes of rock in a race against the clock, as the demo video illustrates (though a sensitivity settings feature would have been nice).

The game features 23 levels and provides a futuristic soundtrack for those that wish to hear it (it is by default off).

Any fan of the cave-flyer genre will appreciate the challenge and polish that Retro brings to the iPhone. Be warned though–patience and precision are most definitely required.