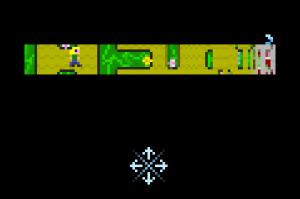 Passage is a touching “game" about life that lasts a mere five minutes.

The game is rather difficult for one person to explain to another and, what’s more, it really needs to be played before it’s discussed.  This puts me in a rather odd position, as a writer bringing news of Passage‘s arrival on the iPhone platform.  I would rather not even provide a screenshot of the game but, as one can be seen in the App Store, I have embedded one in the article as is our habit with such stories.

After having played the game and finding myself affected by the experience, I will simply say that I find the game to be (at least) five-minutes well spent (I’ve played it many times, now).  And I’m not alone in this.  The graphics and sound are quite primitive–but decidely so; graphics and sound aren’t what this game is about.

A few media responses to the game:

“More than any game I’ve ever played, it illustrates how a game can be a fantastically expressive, artistic vehicle for exploring the human condition." — Clive Thompson, Wired

“Passage may look primitive but it’s an absolute pinnacle of videogame development." –Andy Chalk, The Escapist

“Portal is a fine game—nothing less than excellent… Passage is even better." –Nick Montfort, MIT

The author implores users to play Passage first and then read his account of just what he was trying to do with the game.  I agree that this is the best course.  If you feel you may regret having spent $0.99 on this title with so little idea what it’s about, grab the free Mac OS X, Windows, or Linux version first and then decide if it’s something you’d like to spend time with on the go.

There’s a user discussion of the game in the Ars Technica forums that I found to be interesting reading, with a particular post summing up the experience of the game rather well.  (I would quote it, but I don’t want to give anything away…)

Esquire takes an in-depth look at author Jason Rohrer and Passage in their December 2008 “Genius" issue.