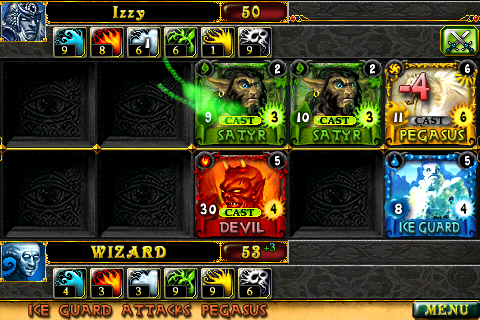 One title that has generated a significant following in our forums is Chillingo Ltd’s Orions: Legend of Wizards [App Store]. Priced at $4.99, Orions is a strategy game that has been described by one forum member as Puzzle Quest but with a fantasy card battle system rather than a Bejeweled-matching system. The game itself is a port of a PocketPC game which was very well reviewed:

Orions: Legend of Wizards is, without hesitation, the best strategy game I have played on the Pocket PC. It is essentially two games in one. First, it is a turn-based strategy game in which you must build an army and conquer all of the other armies in order to unite the world under your control. Like any turn based strategy game, there is an economic component and a military component to the game. In addition, however, Orions blazes a new trail by adding the battle elements.

Players of the iPhone version have had some interface and stability issues, but for the most part appears to have been very well received. The developer has also indicated that a new update is in beta testing to fix several issues.

The game seems to have a bit of a learning curve, but fans of card games such as Magic: The Gathering will find this one hard to resist. If you do play the game, be sure to see this strategy guide that can be helpful.

One forum member IzzyNobre even put together this introduction video to walk you through the gameplay.