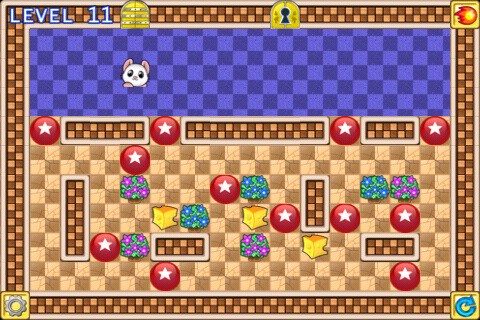 I seem to spend a lot of time talking about control systems for iPhone games, but it’s for good reason.

The iPhone, unlike most gaming platforms, allow the developers to pick and choose what control system works best for their game. With a relatively blank multi-touch slate, options are varied and we’ve seen both successes and failures in this area. From a practical standpoint, good control systems need to “disappear" from your consciousness and bad control systems are the ones with which you constantly struggle.

Plaid World’s Mouse House [App Store] is a game that was originally released over two months ago. It’s a level-based puzzle game in which you play a mouse that needs to collect all the cheese on a level to make it to the exit. The gameplay is similar to Loopy Laboratory in which there are a series of defined obstacles that must be overcome in order to clear a level. Obstacles include rats, slime, movable balls, breakaway floors, and projectile shooting bees.

At the time of its release, I thought it was a fine game, but had major issues with its control system. The original (and still default) control system involves tapping relative to the mouse to move him across the screen. As a result, you need to constantly readjust your fingers so your taps track the mouse. With the most recent 1.1 update, however, the developer has added a Swipe method which is the same one adopted by Loopy Laboratory. Single swipe (anywhere on the screen) moves your character and swipe-and-hold products continuous movement. While it may seem like a minor change, it was the difference between being able to complete the game vs just giving up in frustration.

With the new controls, I found the game itself entertaining, though each of the levels are relatively simple so the included 50 go by quickly. And as with all level-based puzzle games, replay value is limited. Of note, however, the game has just gone on sale for $0.99 (down from $4.99) and the developer has promised that 50 more levels will be released over time.