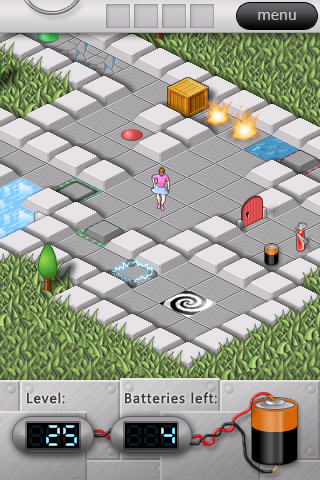 Let me just come out and first say: I really like this game.

Independent developer Bas Tossings has released a charming new iPhone game called Loopy Laboratory [$6.99, App Store]. While it’s not entirely perfect, after playing too many half-finished games and glorified tech demos, it was refreshing to finally see a game with some depth and character. One iTunes reviewer has described this as a remake of Chip’s Challenge/Tile World which it does seem to resemble though the developer says he was inspired by a number of older puzzle games which came together for this project.

The game is set in the laboratory of the evil Dr. Heissenbad. You play the character of Lara. Your job is to escape the laboratory by collecting batteries to turn off electrical fences — at least that’s what the developer description said. But there’s actually a lot of variety in the level obstacles and battery collection is only one small component. There are 50 levels of play in all with a gradually increasing difficulty.

The game gives you some very basic instructions to start and expects you to figure out the rest, which I found out worked quite well. You control the character of Lara with directional swipe controls which are effective. Single swipe moves a single space. Swipe and hold provides continuous movement. The game provides an isometric view of the room in which you move around. Two-finger tapping the screen switches you to a panning mode in which you can scroll to see the rest of the level.

In the first level, you just collect the few batteries in the room and proceed to the exit. Over the course of the next 10 or so levels, you get introduced to the other possible obstacles, which include spiders, worms, water pits, movable boxes, ice, conveyor belts, lasers (!) and more.

The game difficulty ramps up quite slowly, however, so I didn’t really feel challenged until around the 25th level, though things did progress from there. Overall, I was pleasantly surprised by the variety of new obstacles that were introduced along the way. Later levels are definitely more challenging and take more time to solve, but you have to get through a lot of easy levels first.

The issue with any level-based puzzle game is that once you complete all the levels, there isn’t much incentive to play again. I don’t mean to diminish what has already been accomplished in this game, but certainly allowing user created levels or regular expansion packs would give this title an incredible lifespan and (I suspect) a massive following. The developer hasn’t ruled out either possibility, but this obviously depends on the reception of his creation.

As the title stands, however, I do think this is a surprisingly good game and recommend it. Long time gamers in particular will find its structure and gameplay to be a familiar and enjoyable experience.

The gameplay video shows a few of the early levels (3, 6, 7) and a later level (31). Note that the conveyor belt does not video tape well (grey moving walkway).