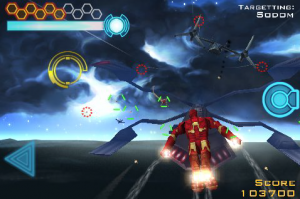 The Iron Man game gives players the opportunity to play as Iron Man and engage in aerial combat and challenges that require quick maneuvering and accurate shooting. As players navigate through high altitude battles, they will soar through 12 different levels of airborne combat where menacing enemies will not rest until they have conquered the skies. To aid in the mission, players have access to high-powered weaponry and strategic flying mechanisms that will serve to eliminate those that stand in Iron Man’s path.

Using an upgradeable, high-powered armor developed by Stark Industries, players will hone their skills by using a variety of weapons to battle through wave after wave of enemy units. With the touch of a thumb, players can access, charge and fire an arsenal of state-of-the-art weapons including repulsor blasts, missiles, and the devastating Unibeam. 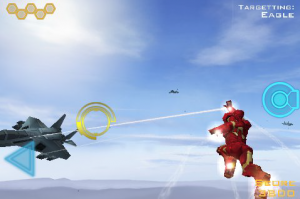 Iron Man: Aerial Assault is an on-rails shooter that is more or less a modern take on the 1985 Sega arcade classic Space Harrier.  Equipped with a variety of weapons, the player guides the accelerometer-controlled Iron Man through wave after wave of enemies and bosses of increasing complexity.  The goal?  Destroy everything and remain intact.  (Where have we heard that before?)

Iron Man, with its accelerometer controls, conveys a nice sense of “bouncy flight," as it were, through its various combat scenarios.  The framerate is rather solid and the target action is intense.  The difficulty increases notably from level to level, extending the playtime (and player frustration) nicely.  It’s a fun shooter overall and feels of a higher caliber than one might expect from a movie studio release.

See our gameplay video to get a feel for the action at hand.