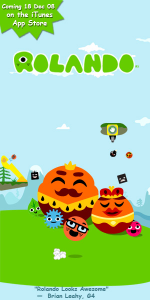 Ngmoco’s Neil Young announced in our forums that Rolando will be released on December 18th, 2008. The date also confirms early ads (see right) that have been spotted on the web. Young also reveals that new videos, screenshots and information will be released this week.

Rolando has been a highly anticipated game coming from Ngmoco and will represent their first premium title. While they’ve delivered a number of successful iPhone games thus far (most recently Dropship), these have been described as fast/cheap titles. Rolando is expected to be priced at $9.99.

Features listed on their site include: