Kotaku got some hands-on time with the upcoming iPhone version of SimCity and shared their first impressions. 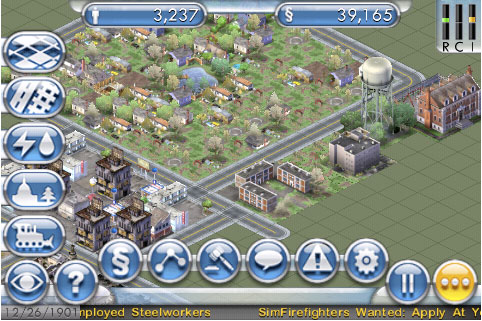 They found that the iPhone version, which is graphically similar to SimCity 3000 on the desktop, suffers somewhat from the iPhone’s small display, given how much typically goes on in a SimCity game screen. EA has turned to multitouch controls to help make the most of the iPhone’s screen real estate, but a few issues still remain.

The controls act the same way they do for Google maps. Sliding your fingers together, inward, zooms out, while sliding them apart zooms in. Touching and dragging moves your view around the map, while continuous taps cycles through the zoom levels. Placing singular objects is simple, but placing large zones or roads can be tricky to maneuver. Once you’ve selected the zone you want, you touch and drag to the appropriate length and width. However, there are times when you may find zones overlapping or roads not lining up properly. EA allows for easy corrections as you can reposition or delete unwanted blocks by the touch of a finger. I found this to be a little wonky at times the more dense an area becomes due to the increased chances of deleting the wrong block or building.

Kotaku also found that the complex, onscreen menu system takes some getting used to, but indicates that the game features a very nice graphical presentation with little touches such as intricately detailed 2D sprites as seen at maximum zoom (smoke rising from towers and detailed shading, etc.).

They emphasizes that SimCity for the iPhone is anything but “SimCity Lite". Everything found in the desktop version is accounted for in this fully featured version: pre-built cities, accountant recommendations, water pipes, natural disasters, etc.

SimCity is expected to appear in the App Store this month for $9.99. Stay tuned for a full review once the game makes its debut.