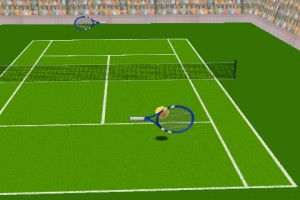 While this is not a massive 3D effort, it does offer a somewhat satisfying touch-control system in which you are directly controlling the swing of your racket.

The game is being offered for free as an introductory offer, but will go up to $1.99 shortly.

As a free game, it’s certainly worth playing around with and they do offer a two player split screen mode so you can play against a friend.