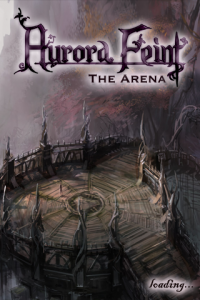 Last night we were able to speak briefly with Danielle Cassley and Jason Citron, the developers of Aurora Feint: The Beginning [App Store] about their next major release which has just been submitted to the App Store.

For those not familiar with the original Aurora Feint, it was one of the first games to appear on the iPhone back in July and won a huge following due to its polish and complexity (not to mention also being free). The developers are following up the success of the original with a new pay version that builds on the existing world and adds head-to-head competition into the mix.

Aurora Feint: The Arena, as it is called, contains all the components of the original game which revolve around a typical color-matching game but set in a role playing environment. Players can earn crystals while “mining" and subsequently level up and purchase additional tools to add to your abilities. 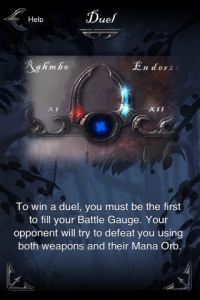 The new game reframes the “tools" as “weapons" which can be taken into battle. The central feature of the new game appears to be the ability to play unique competitive battles against other players.

Rather than “synchronous" head to head competitions, the developers are proud of the unique “asynchronous" system they have developed that seems well suited for casual gaming. This means that you can sit down and play against opponents who aren’t actually online at the same time as you are.

The developers accomplished this by allowing users to play 90 second sessions called “ghost sessions" in which you try to do their best. Players are allowed to bring three weapons (that they’ve earned) into the battle. This gaming session is saved for others to challenge at any time. Particularly aggressive players can actually affect other player’s boards and slow down their play (see Mana Orb docs).

The game also incorporates social aspects allowing users to leave comments and challenges on other player’s “walls". Meanwhile, a world newsfeed provides a constant ticker of real-time events taking place by other players. Overall, the game also seems to offer a lot more guidance and documentation than the original.

The game should appear in the App Store within the next few days and will be priced at $9.99. (Update: The game will be discounted to $7.99 as a sale price at launch)