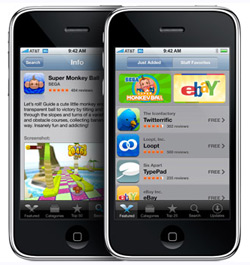 Apple is continuing to recognize the gaming potential of the iPhone and iPod Touch and seems to be increasingly positioning it as a mobile gaming alternative.

Apple’s Vice President of Hardware Product Marketing Greg Joswiak was recently interviewed by Stuff.tv and suggested that there is a lot of potential for iPhone and iPod Touch gaming:

I think you’re going to see a wide variety (of games on the App Store). And they range all the way from casual to big time action games. This is where we are, less than four months into it. Squint your eyes and imagine where we will be in six months time, or a year. The graphics capablity is greater than the DS, we have multitouch, the screen is larger and there’s an accelerometer. And we have the App Store. I think it’s the future of gaming.

“I think the iPhone and iPod touch may emerge as really viable devices in the mobile games market this holiday season," said Steve Jobs, Apple’s chief executive and co-founder, in an interview.

The WSJ article reports that over a quarter of the App Store’s 200 million apps distributed were games. A few notable iPhone developers are quoted, but the most revealing quote comes from id Software’s John Carmack who reports that they are working on two iPhone games at this time.

Carmack had previously revealed in July that they were working on one exclusive title for the iPhone, but little has since been heard about the project. id Software is the developer who has been responsible for the Doom and Quake franchises.