Earlier in the week we pointed readers to Marware’s upcoming Game Grip accessory for the iPhone and iPod touch, a silicone hand grip arrangement designed to enhance the gameplay experience of accelerometer-based game. It’s a great idea, but at $50 (which does not include the optional battery pack) it feels a bit on the expensive side. 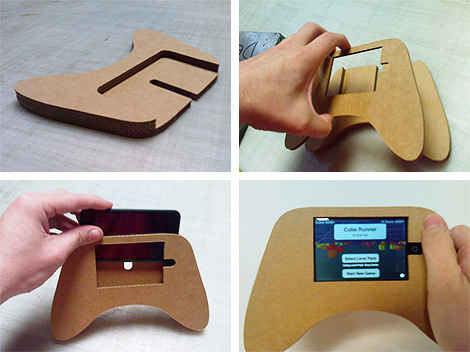 Flickr user ronnsprocket apparently shared the sentiment and took matters into his own hands.  A cardboard box, an X-Acto knife, a few dabs of glue and a little geekish ingenuity was all it took to create a free, functional equivalent–if somewhat ergonomically lacking as compared to Marware’s offering.  But hey, it’s free!

We have contacted the engineer behind this project and will let readers know if his cutting templates become available online.