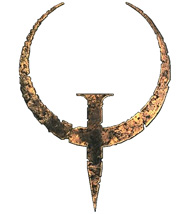 Mobile developer ZodTTD has announced that his free iPhone port of id’s classic first person shooter, Quake, will be available through the iTunes App Store in the next few days.

I recently submitted a free port of Quake to Apple’s AppStore. It is compatible with the iPhone and iPod Touch of all versions/firmwares 2.0+. Here is a video of it in action!

At first accelerometer support was included, but it is very hard to play the game while maintaining the positions needed for Quake. So it has been disabled in this revision.

It usually takes between 2 to 5 days to get an app approved (or rejected) for AppStore. Once/if approved for AppStore, it will be updated to include network play, mods / downloadable content, and more!

As you can see and hear, this version has sound support and uses a landscape orientation.

Please support my efforts on bringing this awesome title to AppStore, and leave a comment…

Update: id contacted us and said this would be an illegal port not sanctioned by them, so they it will, of course, not be allowed.