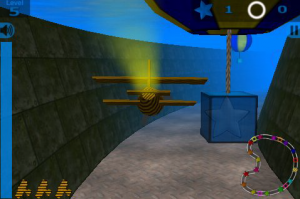 Bootant’s flying game BiiPlane, which we previewed earlier in the week, has appeared in the App Store [link].

BiiPlane is a bullseye flyer in the spirit of Nintendo’s acclaimed Pilotwings and as-yet unreleased Wii Sports: Airplane–but is a much simpler game, overall.

BiiPlane places the player in accelerometer-based control of a bi-plane (bii-plane?) flying through a series of canyon mazes filled with hot-air balloons dangling star cubes and star rings suspended in mid-air.  The goal of the game is to gather star cubes by flying directly through them.  If aim is not true and either the hot-air balloon or the chain the star hangs from is hit, the star cube will drop to the ground, making for a perilous pick-up scenario as impacting the ground or walls of the canyon inflicts damage upon the plane.  For every star ring that is successfully bullseyed, the player can swipe the screen, which flips the plane 180-degrees to aid in collecting missed star-cubes.

Being a fan of this genre (I pray nightly that Nintendo will go ahead and release Wii Sports: Airplane), I find BiiPlane to be a fun diversion that offers smooth, sensitive control.  (That’s not to say that keeping off the canyon walls in some of the more zig-zagged levels is an easy task.)  I do, however, wish there were more expansively designed levels.  As the demo video illustrates, despite texture changes and route shape changes, level-to-level the game is much the same.  It would offer greater replay value if there were more varied terrain to fly through.

While BiiPlane is a game in the spirit of Pilotwings, it is nowhere near as complete a title.  But then, at $3.99 [App Store] it’s one tenth the price of the Nintendo classic.  Fans of the genre may want to have a look.