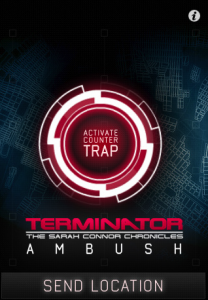 FOX Broadcasting has launched a web and iPhone-based game called Ambush [App Store] that ties to its TV series Terminator: The Sarah Connor Chronicles.  Ambush is a simplistic MMORPG that places the player in a virtual city and relies upon real-time iPhone GPS location information to track players within the game world.

The player must create an account at the web-based game site terminatorambush.com and choose to play as either a Human or a Terminator.  The player’s mission is simply to survive in a fight to either protect or eliminate Skynet, the self-aware computer network bent on destroying the world.

Ambush can be played either online or on the iPhone.  The online player’s goal is to predict the movements of their targets in the virtual city and set traps in an attempt to terminate their iPhone opponents.  The iPhone player’s goal is to survive within this virtual city by sending real-time GPS location information and avoiding traps set by their online opponents. 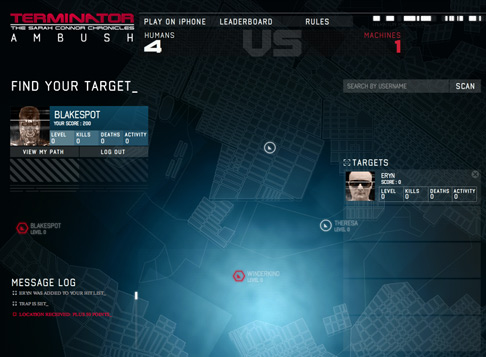 The website’s rules listing adds clarity to the gameplay:

Welcome to Skynet. Your goal is to earn as many points as possible by setting traps to terminate your iPhone opponents.

Each icon on this map represents an iPhone player. Red for Machines, White for Humans. Select an opponent from the map.

Your opponent’s last 5 locations are displayed on the map. This path is based on the real movement of the iPhone player as he sends his location in real time.

If you wish to track this player you may add them to your Targets.

Your goal is to terminate your target by setting a trap in the location where you think your target will appear next.

Your trap is set. You will now wait for your target’s next move.

You may reset your trap at any time or leave your trap where it is if you are certain your target will move to that location.

You can track up to 5 targets at a time.

A player’s activity refers to how often they set their locations. A player’s level is a reflection of their score.

Ambush [App Store] appeared today as a free download in the iTunes App Store.  Obviously as more iPhone players jump onboard gameplay in the game’s virtual world will become more active than it is, here on day one.

FOX’s Ambush has beaten another upcoming location-based MMORPG to market: Parallel Kingdom, which we looked at back in March.