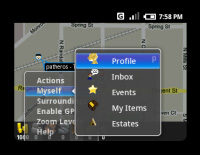 Imagine, if you will, a world inside your phone, parallel to the real world in which you toil through the typical ins and outs of daily life. An overlaying world, in a sense. What you are imagining is the Parallel Kingdom.

Parallel Kingdom is the iPhone’s first MMORPG (or Massively Multi-player Online Role Playing Game). It was designed not as merely a PC-style game ported to a phone but with next generation gameplay that makes sense on and takes advantage of the mobile platform as the main objective.

Parallel Kingdom places the virtual world on top of the real world using the GPS inside your phone. Attack, dance, hug or team up with anyone around you. Set up trade routes, craft items or even create your own kingdom.

Wherever you are, you can open your phone and play, whether you’re on the bus, walking down the street, or at home. Anywhere in the world, any time of the day. Parallel Kingdom never stops, you play it when you want and where you are.

Parallel Kingdom seeks to transform the droll commute to the office into a harrowing journey through adventureland where one never knows what dangers lurk around the next corner. It’s an innovative concept that obviously depends to a large degree on the number of players in your geographic area. But as Justin Beck, the CEO of Parallel Kingdom (the company) points out, there’s still fun to be had for those fairly isolated from other players.

The GPS controls what part of a neighbourhood you are in and from that location you can then move your character within a couple block radius of your actual location. Giving you the freedom to explore while still being completely location based.

Not all of the game dynamics in Parallel Kingdom require other people to be immediately present, so there is still quite a bit of game play for those who don’t have any other players right near them.

Gameplay will be quite different depending on your location, for example: New York vs South Dakota. This will make Parallel Kingdom fascinating, especially for travellers. We’re excited to see what comes from it.

Parallel Kingdom will debut later this year on the iPhone and Android platforms. We’re anxious to see how this title develops and hope that there’s enough richness to the game to carry it through the initially sparse payer community at first launch.

The developer has posted a few videos on its website: