Earlier today we pointed to a post made by X-Plane author Austin Meyer on the X-Plane forums that spoke of a rather bright future for X-Plane on the iPhone [App Store].  We’ve since learned that the future is rather close at hand.  The X-Plane 9.01 update was recently submitted to Apple and should be appearing in the App Store any time now. 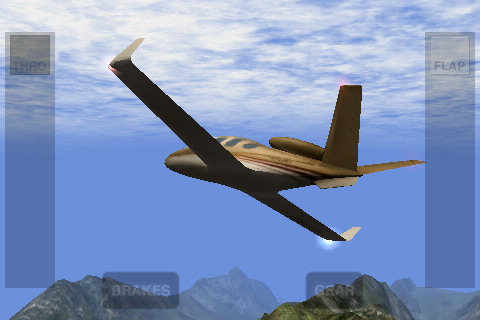 According to Austin, v9.01 will bring the following improvements:

Austin has recently placed a dedicated X-Plane for iPhone page on the X-Plane website where he addresses various problems and wants he’s seen users express in reviews posted to the App Store.  We were particularly pleased to see an indication that two more aircraft will be added to the app in a free update coming soon.

The X-Plane for iPhone page also details “The story of X-Plane for iPhone," an account of the 14-day development frenzy that lead to the v9.00 App Store release, all of which took place at the Apple Campus at 1 Infinite Loop “right in the middle of the ‘hive-mind’, right alongside all the engineers at Apple."

Around September 1 or so, I was sitting on a park bench in Central Park, New York, enjoying a WONDERFUL fall Saturday afternoon, typing away on my Mac laptop, when my tech support guy, Randy Witt, called me and suggested that we do X-Plane for iPhone. Of course, I thought this idea was IMPOSSIBLE, because how could a PHONE have enough POWER to run X-PLANE? And how would you CONTROL the planes? Nevertheless, I called Apple to ask them whether it would be possible to get X-Plane running on the iPhone, and whether Apple would have any interest in seeing it done. The answer was a bit surprising: Not only is the iPhone just powerful enough to RUN a specialized version of X-Plane, but Apple would LOVE to see it done NOW. Apple had a Keynote presentation coming up, and would love to have a couple of exciting new games ready to consider showing off at the presentation. My response: “Well, I live in South Carolina, I am currently in New York, it’s Saturday afternoon… I could be in Cupertino (Apple’s headquarters) maybe some time late Monday, and we could start work on, say, Tuesday or so? My contact at Apple gave me my absolute favorite reply ever: “Umm.. How about we see you Monday morning at 9 AM sharp instead?"

See the full story at the X-Plane for iPhone page at X-Plane.com.