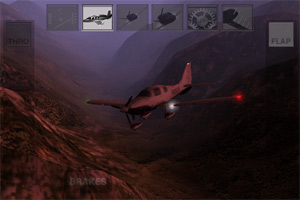 As we recently reported, Laminar Research has released a “mini-version" of its hugely popular, realtime physics-based flight simulator X-Plane 9 for the iPhone [App Store].  We’ve recently logged some flight time with this title and are anxious to share our thoughts.

X-Plane 9 for the iPhone is based on the desktop version of X-Plane 9, which is available for Mac OS X, Linux, and Windows.  X-Plane sets itself apart from other flight simulators by implementing a concept known as blade element theory.  Whereas most flight simulators use predefined look-up tables to reproduce the flight characteristics of various aircraft, in X-Plane aircraft are comprised of hundreds of small sections and flight behavior is modeled in real-time by calculating the lift and drag of each of these individual sections.  This allows for the simulation of aircraft–real or fictional–with no available aerodynamic profile data.  Thanks to Laminar’s use this approach, there is an active community of users designing their own aircraft with X-Plane‘s bundled Airfoil-Maker and Plane-Maker applications.

X-Plane 9 for the iPhone, weighing in at 6.2MB in size, is a significantly scaled down take on the desktop original (which is distributed on six dual-layer DVDs!).  While the number of variables that are modeled by the desktop version boggles the mind, the iPhone version brings forward only those details that are core to a fun, more “relaxed" mobile simulation experience.  The physics engine, however, remains mostly intact; author Austin Meyer points out, the physics in the iPhone version are actually “about 95%" as good as that of the original. 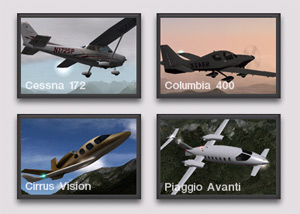 At startup, X-Plane 9 places the pilot at the top of a runway in Innsbruck, Austria in the default aircraft, the Cirrus Vision, a very light jet.  Three other aircraft can be chosen through the app’s options menus: the Cessna 172, the Columbia 400, and the Piaggio Avanti.  Other attributes that can be adjusted include: time of day, wind speed and direction, turbulence, cloud type and altitude, visibility, and aircraft weight.  Several preset flight scenarios other than the initial runway position are available to choose from, as well as a random flight position feature.

Control is one of the best features of X-Plane 9 for the iPhone.  As a flight simulation fan myself, and a long-time user of X-Plane for the Mac, I have purchased several USB flight sticks over the years to enhance the simulation experience.  The iPhone, as a controller, has them all beat.  Thanks to its accelerometers, the iPhone basically becomes a flight yoke.  Tilt forward to dive, pull back to climb, and tilt side-to-side to control ailerons.  Flight yokes are expensive “luxury" peripherals that are often part of hardcore flight simulation fans’ desktop setups–and the iPhone basically “has one built in," in this context. 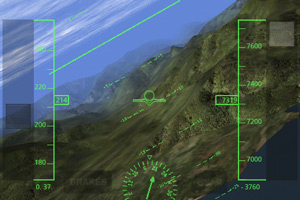 X-Plane 9 for the iPhone runs at a very respectable framerate, which is impressive given the amount of real-time flight calculations taking place along with engine audio playback.  Occasionally, as with the desktop version, a brief mid-flight pause will be encountered during scenery loading.  The textured aircraft models are light-sourced and render well and the mountainous Austrian scenery is clean and looks well defined at any real distance, making for a rather impressive looking 3D flight experience.  That said it all looks a bit similar in the scenery department due to the single provided locale.  Additional flight locations for a change of scene would be at the top of my “wants" list.

And that list follows, in descending order of “want":

The X-Plane is one of–if not the–most respected desktop flight simulations available to consumers.  Austin Meyer has done a truly impressive job of capturing the key elements of the full version and packaging them up to carry around in your pocket.  At $9.99, flight simulation fans will find X-Plane 9 for the iPhone to be a real value.  Yes, the title has room for improvement, but already I have been helplessly drawn to spend more time with it than any other iPhone game and even in this first release it has become my favorite app in the App Store.  Well done, Austin.

It should be noted that this is a simulator rather than a true game, in that the point of it is to enjoy the feel of flying rather than completing any tasks or goals.