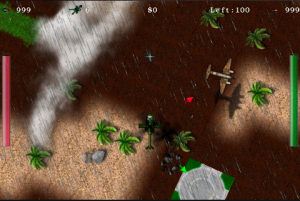 Blue Skies is a top-down 2D helictoper shooter that’s more or less a cross between Will Wright’s classic Raid on Bungeling Bay and Freeverse’s Wingnuts Temporal Navigator. The player pilots an accelerometer controlled helicopter across 30 search-and-destroy missions facing enemy tanks, planes, helicopters, blimps, and mines. Powerups and cash are acquired by destorying enemy vehicles. Accumulated cash can be used to purchase more advanced weapons from the home base R&D shop.

We found version 1.0 of the game to be a fun and simple shooter. The full version has since seen a price drop to $5.99 and the developer has been quite active with many new features coming in version 2.0.

Version 2.0 has been submitted to the App Store and is still under review, but should arrive any day. New customers can try the Lite version which is available now. [App Store]