We recently posted that Blue Skies [App Store] from Egerter Software appeared for download in the iTunes App Store.  After spending some time with the game, we can say it brings a solid shooter experience to the iPhone.

Blue Skies is a top-down 2D helictoper shooter that’s more or less a cross between Will Wright’s classic Raid on Bungeling Bay and Freeverse’s Wingnuts Temporal Navigator.  The player pilots an accelerometer controlled helicopter across 30 search-and-destroy missions facing enemy tanks, planes, helicopters, blimps, and mines.  Powerups and cash are acquired by destorying enemy vehicles.  Accumulated cash can be used to purchase more advanced weapons from the home base R&D shop.  There are 10 weapons in all.

Gameplay is set to a 10-song techno soundtrack that heightens the sense of action. 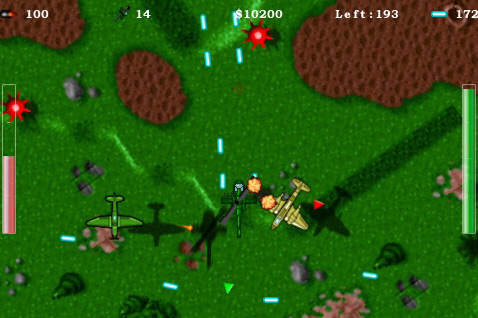 Blue Skies is a shooter, plain and simple.  Fly your helicopter, blow up things, complete the mission.  Gameplay proceeds at a decent pace and the accelerometer helicopter controls “feel right."  The game’s graphics are simple and work well, but the tile-based playfield could do with more skillfully rendered textures; at times certain terrains are obtrusively blocky and unrefined. The mission setup dialogue verges on corny at times, but is short enough not to detract from the game flow.

The iPhone is lacking in quality 2D shooters (R-Type please!) and Blue Skies is a solid additon to the genre.  2D blaster junkies will find it worth its space on their iPhone or iPod touch.

Blue Skies can be purchased through the iTunes App Store for $9.99.