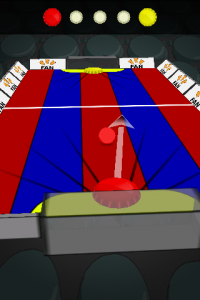 Interactive Fan previously released some screenshots for their upcoming iPhone game Fan Caps. The game was released to the App Store this morning [$5.99, App Store]:

Choose between loads of caps, fields and balls, move your cap and hit the ball in the right direction to fool your opponent and score a goal. Use your abilities to score as many goals as possible playing against the computer or wirelessly against a friend, and enjoy your spare time with this mobile 3D game. Fan Caps features touch controls and accelerometers-based camera.

The game offers both computer and head-to-head Wi-Fi play as well as some attractive visuals.

The actual control mechanism, however, was a bit of a surprise as it uses a vector (hold and pull) method to strike the ball rather than direct control of the puck. We’ll publish a full review once we have had more time with this title.