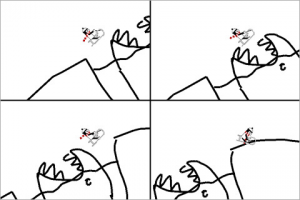 As noted on our Newest iPhone Games listing, InXile Entertainment has released the official version of Line Rider [App Store] to the App Store.

The $2.99 app provides a physics simulator in which you draw a track that the main character rides:

In Line Rider you draw a track with a simple pencil tool then send Bosh on his sled careening down the course until he wipes out! Create a landscape with as many ramps, hills, and jumps as you can imagine. The possibilities are only limited by your imagination and the physics of a boy on a sled.

The app provides a blank canvas for you to draw the track from a toolbox of options, including pencil, line, eraser, undo, zoom and more. You then set the rider loose to see him zoom across your creation. The iPhone version allows you to use the accelerometer to affect the direction of gravity on the track, and also provides a method to load and save tracks from a central repository. While fans of Line Rider will likely enjoy this title, those unfamiliar with the franchise might simply go “huh?".

Line Rider originated as a Flash-based web game which became quite popular. An unofficial clone called Flying Rider was briefly available for the iPhone but was pulled in August due to legal pressure from inXile.

A Flash and Silverlight version of the game is also available for play online (older version).

Here’s a remarkably impressive track from the non-iPhone version that was found on YouTube: