As we recently reported, EA’s much anticipated Spore Origins [App Store] for the iPhone and iPod touch is now available in the iTunes App Store.

Spore Origins is an abbreviated, mobile adaptation of Will Wright’s Spore, one of the most highly anticipated computer games ever released.  As Wikipedia describes Spore,

Spore is a multi-genre “massively single-player online game" developed by Maxis and designed by Will Wright. It allows a player to control the evolution of a species from its beginnings as a unicellular organism, through development as an intelligent and social creature, to interstellar exploration as a spacefaring culture. It has drawn wide attention for its massive scope, and its use of open-ended gameplay and procedural generation. 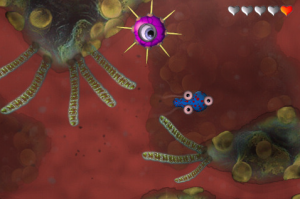 While Spore is a massive title that takes the player through five distinct game phases (Cell, Creature, Tribal, Civilization, and Space), Spore Origins is a more modest undertaking that is entirely based around the Cell phase of evolution.  EA demonstrated an early version of the game at Apple’s iPhone SDK event back in March, and since then it has been one of the most eagerly anticipated App Store releases.  (Both Spore and Spore Origins saw a nearly simultaneous release in the last few days.)

In Evolution Mode, the you must move your organism through a variety of environments from the Primordial Ooze to the Sandy Coast, evolving along the way.  Eating smaller creatures fills the DNA and Heart meters at the top of the screen.  For each filled heart, your organism increases in size which puts more creatures on the menu, so to speak.  Once the DNA bar is filled, your organism moves to the next level.  Along the way, various symbiotes can be collected which enable temporary capabilities such as shield, speed increase, and poison.  The Creature Editor allows you to customize your organism to make it smarter, stronger, and faster.

Survival Mode presents a more simplistic play scenario.  The goal is simply to stay alive in order to reach the highest level possible.  Avoid all other creatures and pick up food pellets in order to fill the DNA bar and move to the next level.  Various power-ups can be collected along the way: Vortex, Shrink, Bomb, Shield, Clock, Blades, and Lightning. 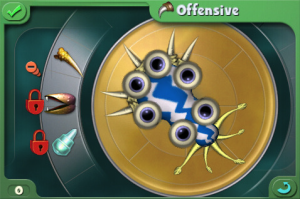 The iPhone’s accelerometer controls are used to guide the organism through its environment, with a tap to the screen activating power-ups or offensive “special parts" added through the Creature Creator.  The controls work well and feel “natural" and the relative tilt angle can be calibrated through the options menu.

Spore Origins feels every bit a big studio title.  It features some of the loveliest graphics ever seen on the iPhone.  The creatures are cute and colorful, the levels are highly detailed, and the hazy backdrop animations amid the ooze goes hand in hand with the fitting ambient soundtrack to deliver a pleasant sense of immersion in the game world.  Tricky Software has delivered a highly polished mobile adaptation of the Maxis original.

Spore Origins is certainly one of the most engaging games available for the iPhone.  Using the Creature Creator to evolve your organism–to better equip it to eat and not be eaten in the dangerous game world–and to watch those changes work to advantage is highly satisfying.  And while an iPhone port of all 4GB of the Mac / PC flagship title would’ve really made us happy (we can dream…), little brother Spore Origins is a great game that’s well priced in the App Store at $9.99.