Asphalt 4 Elite Racing is a 3D auto racing game that features 28 different vehicles (Corvette, Ferrari, Aston Martin, Bugatti to name a few) and nine different venues (New York, Paris, Dubai, Shanghai, etc.).  The iPhone version of the game is a port of the original mobile version which is available for a wide variety of platforms. 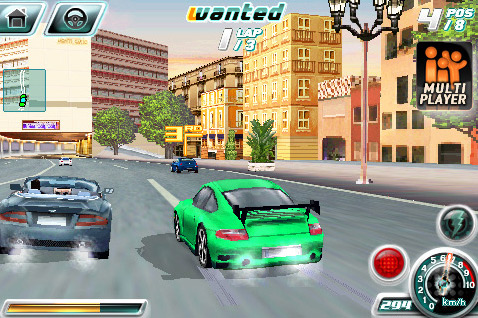 Asphalt 4 is more of an arcade-style racer akin to the Ridge Racer series than a realistic, simulation-style game such as Gran Turismo.  The goal of the game is to acquire cash by way of savvy play style, goal completion, and more or less breaking the law: “Perform illegal acts to get cash, boosts, and live TV time!"  New venues and performance tweaks are unlocked along the way as cash is accumulated.

Asphalt 4 is a rather aggressive affair.  In-game Nitro Boosts (which are used frequently) provide a speed burst and allow for “takedowns" of other vehicles, which bring bonuses to the player.  Frequent takedowns and general on-road mayhem will get the police on your tail but, happily, cops are valid takedown targets, as well.  A big part of the game is “drifting" (Ridge Racer style), and a mastery of the technique results in accrued bonuses.

The game can be played in either portrait or landscape orientation and three modes of control are available: a tap mode where steering is performed by touching the left or right side of the screen, a tilt mode that utilizes the iPhone’s accelerometers for steering, and a steering wheel mode (shown in the accompanying YouTube video) in which a finger or thumb can be used to guide an on-screen steering wheel for vehicle control.

Asphalt 4 features the most lavish 3D graphics of any iPhone racer–of any iPhone game, really–in the App Store.  The levels and vehicles are highly detailed and exhibit truly console-class graphics–but this comes at a price.  While gameplay is generally smooth with an acceptable framerate, slowdowns occasionally surface and detract somewhat from the overall game experience.  What’s more, the current version suffers occasional crashes out to the home menu, but the game’s automatic progress saves prevent any real loss of achievements when these occur.

Asphalt 4 has seen rave reviews amongst early adopters, but is in need of an update to address the crashing issue and, ideally, performance tweaks to address slowdowns when on-screen action is particularly intense.  That said, Asphalt 4 is my favorite iPhone racer overall and fans of “drifting” racers should be particularly fond of the title.  The numerous achievements and unlocks give Asphalt 4 the depth of a console game, ensuring long playability and value for its $9.99 asking price.