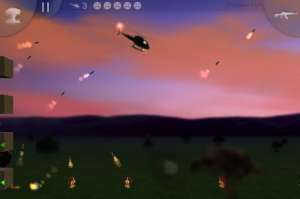 According to the article, Frampton is seeing about 500 downloads a day for his $7.99 game. So far, he’s seen 20,000 downloads total. That calculates out to $111,860 USD made so far and about $2800 more each day. If that level of interest sustained, it could reach $1 million in net revenue annually.

Frampton’s Chopper was inspired by the the classic Choplifter game from the 80’s. In Chopper, players complete missions, which involve rescuing civilians while fighting off tanks and bazooka wielding men.

David Frampton was kind enough to provide TouchArcade with an early interview as well as early screenshots of the then-unreleased game.