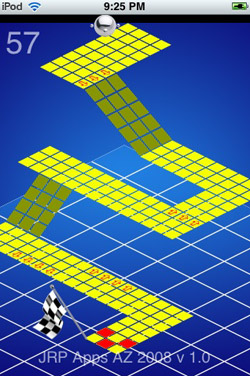 iPhone-using Marble Madness fans will probably get all dreamy eyed when they behold screenshots of the recently released AeroGyro [App Store] from JRP App AZ.  I know I did.

AeroGyro (which is actually closer to the less well-known ’80s game Spindizzy than Marble Madness) is an accelerometer-controlled isometric 3D maze game in which the player guides a shiny ball through various platform mazes towards the finish line before the timer runs out.  Ramps and various “lateral forces" complicate the task.

But they may as well not.

And that’s because the game is nearly impossible to play.  In its current v1.0 state the controls are so sensitive that getting to the finish line anywhere beyond the third maze feels like an astounding achievement.  The game sports a lovely design that harkens back to the aforementioned classics, but until the control system receives some serious adjustment, we suggest readers pass on AeroGyro [$2.99, App Store].