As we recently reported, Handmark Inc. has released GTS World Racing [App Store] through the iTunes App Store.  After spending some time with this title, we can recommend it as a solid iPhone racer.

Unlike the popular Crash Bandicoot Nitro Cart 3D and Cro-Mag Rally which are kart racers that put a priority on the “zany" or “fun" elememts of racing, GTS Word Racing is one of the two App Store racing titles that strives to capture a more realistic racing experience (the other being Wingnuts Moto Racer from Freeverse). 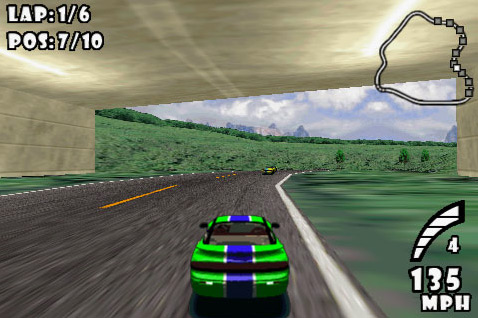 Gran Turismo fans take note–GTS World Racing is the most realistic racer on the iPhone.  While it doesn’t quite match the driving sim featureset of the aforementioned, legendary Playstation racer, it does surpass Wingnuts Moto Racer as far as realistic racing goes.  That said, it lacks a bit of the “fun" of Freeverse’s offering.  (After all, there’s no punching in GTS World Racing…)

The game offers four play modes: Single Race, Challenge Cup, Grand Tour, and Championship.  In all, the there are 64 tracks across 16 different locations.  The track scenery varies from desert to jungle to icy mountainside, but despite the varying environmental textures, the tracks feel rather similar, overall.  The game world features a 3D track landscape and scrolling backdrop that come together to deliver clean visuals that look favorable compared to other iPhone racing titles.  The only real graphical complaint might be the use of 2D vehicle graphics.  While there is a bit of slowdown when all cars are onscreen at once during the start of a race, the framerate is generally solid.

Speaking of vehicles, there are three different types to choose from: Sports, Coupe, and Formula.  Each vehicle type offers a different combination of acceleration, speed, and handling characteristics, with the Sports vehicle providing the most rounded racing experience.

GTS World Racing features the most spot-on accelerometer control of any racing title currently available for the iPhone.  It’s basically “just right."  Acceleration / breaking is achieved by tilting the iPhone forward and back while steering is controlled by rotating the iPhone clockwise and counterclockwise like a steering wheel.  Thanks to the particuarly wide “camera angle" of the game, moving down the track at full tilt delivers a satisfying sense of speed, if not one quite so dramatic as that of Moto Racer.

We feel that fans of the realistic racing genre will find $7.99 a fair price for GTS World Racer, the App Store’s standout iPhone racing title.