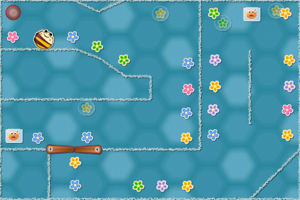 Igloo Games’ Dizzy Bee [App Store] was one of the first games we reviewed, and it remains amongst our favorites.

Dizzy Bee’s premise seems simple enough: tilt your iPhone to direct Bee to free the fruit and then to the exit.

And for the first level or two, you think to yourself that this is just a fun and easy exercise. Once “baddies” are introduced, however, you realize you have to take into account their movements which are also affected by the same tilting/gravity.

At $2.99, there was really no real excuse to not buy this remarkably polished and fun game. If you haven’t made the plunge yet, though, Igloo Games has just released a free 4-level version of the game called DizzyBeeFree [App Store].

The free game is identical to the full version but limits you to only 4 of the levels. A gameplay video remains available from the developer.