This year marks the 30th anniversary of the seminal shooter Space Invaders and, thanks to Taito’s recently released re-vamped incarnation Space Invaders Extreme, those pixellated invaders advancing from above have been on the mind of many a gamer of late.  And while the iPhone has not (yet?) been graced with a version of Taito’s latest outing, there is a unique App Store title that delivers a nice fix of that particular flavor of retro gaming.

Space Out [App Store] from Binary Square can be quite simply described: Space Invaders meets Arkanoid.  The playfield closely resembles Space Invaders; it consists of rows of aliens that move across the screen, slowly advancing towards the bottom, firing down at the player all the while.  But in this case, the player is not a movable laser turrett, but an Arkanoid style paddle that is controlled by swiping a finger across the screen in an attempt to deflect a ball upwards towards the aliens, destroying them upon impact. 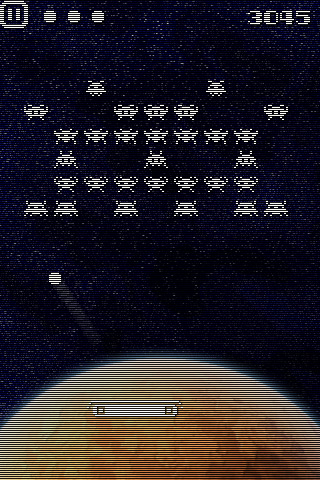 Like Arkanoid bricks, certain aliens release power-ups that descend towards the paddle upon their destruction.  These power-ups come in various flavors: Long Paddle, Shields On, Power Ball, Rebound Ball, Add 1 Ball, Add 2 Balls. (Power-ups are really what makes Arkanoid much more than the simple Breakout.)

The gameplay in Space Out is fast-paced and harder than you might expect.  The constant downward volley of enemy fire makes maneuvering to connect with the ball while staying out of harm’s way a particular challenge.  And the fact that an upward-moving ball is quickly deflected downwards upon impact with a bolt of enemy fire necessitates some nimble paddling.

A very nice touch to this title is the attention given to making it feel truly retro, from the visible “scanlines" to the authentic 8-bit sound effects.

It’s a blast back to the late ’70s. Complete with all new 8-bit sound effects created with a MOS 6581 SID chip from the Commodore 64 and speech generated with 8kHz 8-bit allophones.

Space Out is available through the iTunes App Store for a price of $4.99.  Overall, it’s a relatively basic game, and may only be satisfying to gamers who particularly value a bit of nostalgia in their gameplay.