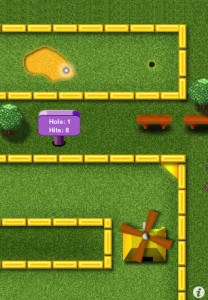 When I saw Try This Networks’ Putt Putt Golf [App Store] appear in the App Store, I thought our hopes for a proper miniature golf game had been answered.

Navigate your way through 18 holes of miniature golf. Avoid water jets, rotating bridges, challenging slopes and more as you try to make par or better.

While the game does deliver on its promise, it’s delivered rather unimaginatively. (It’s no Zany Golf…) The game consists of 18 holes of miniature golf (in single player mode only) with a variety of typical obstacles, including windmills, ramps, water and sand.

While the game is controlled using relatively well established mini golf controls (press and pull back on ball), there is no in-game documentation on how to play. Swiping elsewhere on the screen does nicely allow you to pan across the rest of the hole you are playing, but stops short at the edges. A side effect of this limited panning ability is that you may not be able to line up a proper shot if your ball is too near the edge of the course.

The gameplay itself is as expected, and once you complete a hole, you are allowed to individually select it in the future. The entire game, however, can be played in your first sitting. The long term intent is perhaps that you can replay each level to try to perfect your score, but if you are expecting any variety beyond the intial 18 holes, you will be disappointed. Now, there may be an audience of non-gamers that want exactly this: a simple mini golf game to play while waiting in line. And for that audience, this game mostly delivers and in a reasonably attractive package.

There are a few graphical anomalies I encountered in version 1.01, such as the ball occasionally rolling through a moving lever or a wall. At one point, I had some graphical glitches making the game unplayable. Restarting my iPhone corrected this problem. Also, at this time the music can not be turned off, but the developers promise a fix for this soon. Finally, the high score table could be better organized, as you must tap on names individually to see the final scores.

Gameplay video shows a couple of the courses:

If vanilla miniature golf is want you want, this is it. (But you might want to wait for a few bugs to be fixed).