HermitWorks, who recently ported id’s classic Quake 3 to the iPod touch, isn’t simply resting on its laurels with that one, notable achievement.  No, as Inside Mac Games reports, the development group is “madly coding" a port of their own action / strategy game Space Trader to the iPhone as well as the classic iPod. 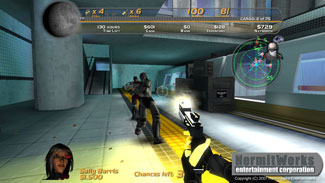 Sure enough, HermitWorks has set their sites on Apple’s mobile gaming platform the iPhone, but their goal isn’t to enable armies of iPod-wielding Apple fans to play Quake III; instead, they’re “madly coding,” says Tofer, to port their own Space Trader to iPod and iPhone, hopefully in time to be released in June with the official iPhone App Store. “I’d love to have it by June; we’re just in a kind of porting frenzy right now.” Problem is, in order to be a part of Apple’s official offering, they’d need at least minimal support in the form of the official Apple SDK, which has been rather late in making the rounds. HermitWorks doesn’t want to be viewed as a group of iPod hackers: they want “people to be able to go to iTunes and download” their games through an official channel.

And if that’s not enough, they are also working on a role playing game for the iPhone and iPod touch, based on a modified Quake 3 engine, known as Quest.

…Details were scarce, but HermitWorks has something else hidden away in their dusty straw hut: the underpinnings of a casual iPhone RPG, tentatively called Quest. Before you call up memories of King’s Quest, Puzzle Quest or even Peasant’s Quest, know that this game isn’t your average 2D Fetch Quest. Using the same modified Quake III with the graphics “kicked up a few notches,” HermitWorks promises a heavy-duty 3D single-player role-playing experience with one very ambitious addition: instead of NPCs, characters you meet will often be other players.

Stay tuned for more coverage of HermitWorks’ commendable efforts in developing for the iPhone platform.