Earlier today, the legendary Pokémon developer Game Freak launched an enhanced version of its 3DS classic Pocket Card Jockey on Apple Arcade in the form of Pocket Card Jockey: Ride On!. Over the last week, I’ve been playing it on multiple devices for review including checking out the early parts of the 3DS game once again to compare with this new version. I had a chance to talk to Masao Taya (Director Pocket Card Jockey: Ride On!) and Masafumi Saito (General Manager Development Department 1) at Game Freak about today’s launch, working with Apple, a potential Nintendo Switch version, the future of Gear Project, and more. 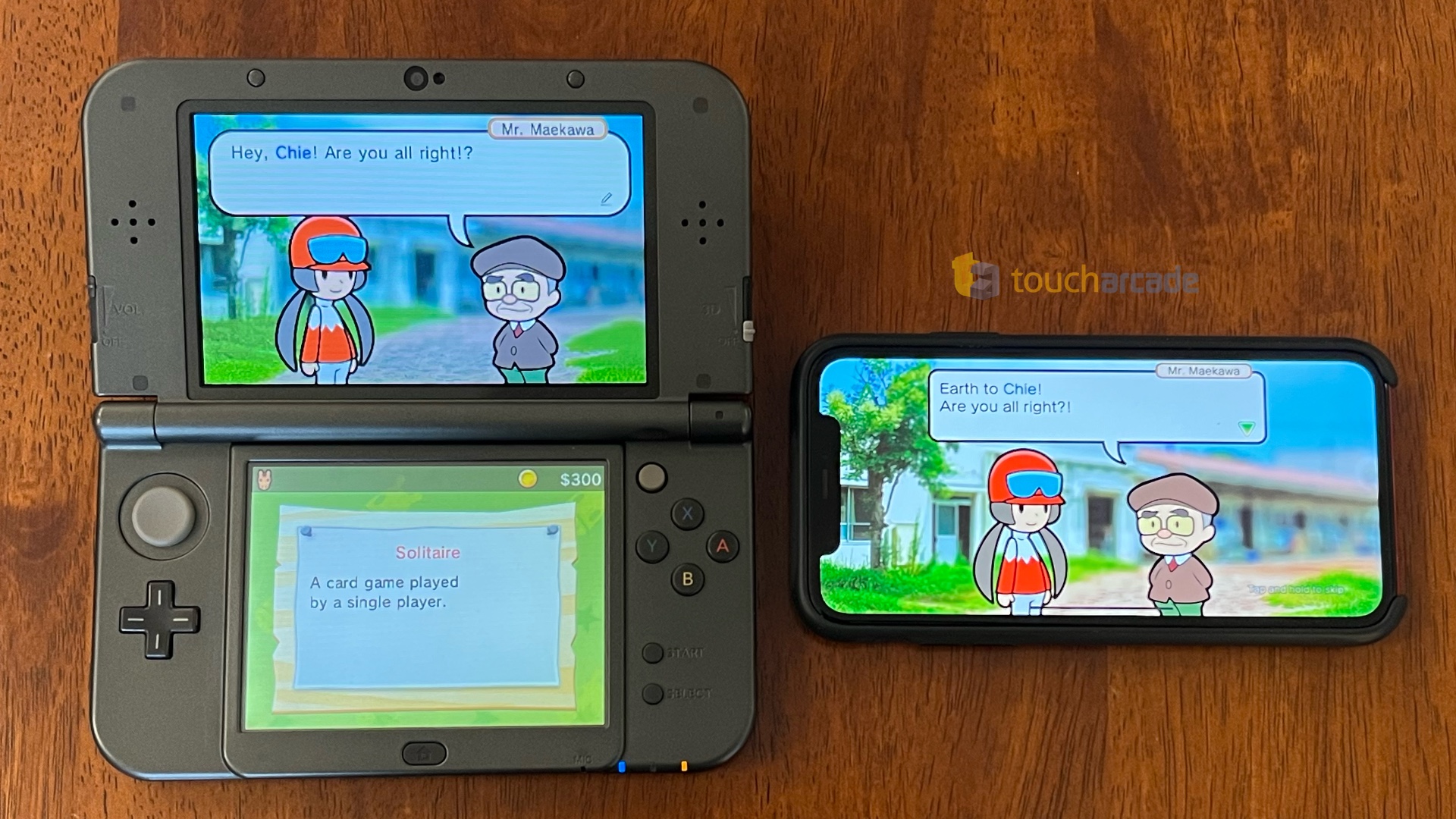 TouchArcade: Pocket Card Jockey was one of the more interesting 3DS eShop exclusives. It also has quite a cult following outside Japan. When a trademark for Pocket Card Jockey: Ride On! was spotted last month, a lot of people expected a sequel to potentially launch on Nintendo Switch. What led to the decision to bring it to Apple Arcade over other platforms?

Masao Taya: We released an F2P smartphone app version of Pocket Card Jockey in Japan, but we couldn’t adapt the game very well to the F2P style, it didn’t go well in business terms. After that I kept thinking about a way to make Pocket Card Jockey a success as a smartphone app or mobile game, but I had a lot of other (fun) work to do, so I didn’t do anything about it. While this was happening, Apple Arcade began to catch on in Japan. With Apple Arcade, which requires absolutely no in-app purchase beyond the subscription service fees, there was no need to forcefully remodel the game into an F2P style, so I decided to see if I could provide the real joy of playing Pocket Card Jockey with it.

I know that there are a lot of people who’d love to see a Nintendo Switch version, and porting it is one possibility, but right now our main focus is on Apple Arcade users enjoying it. 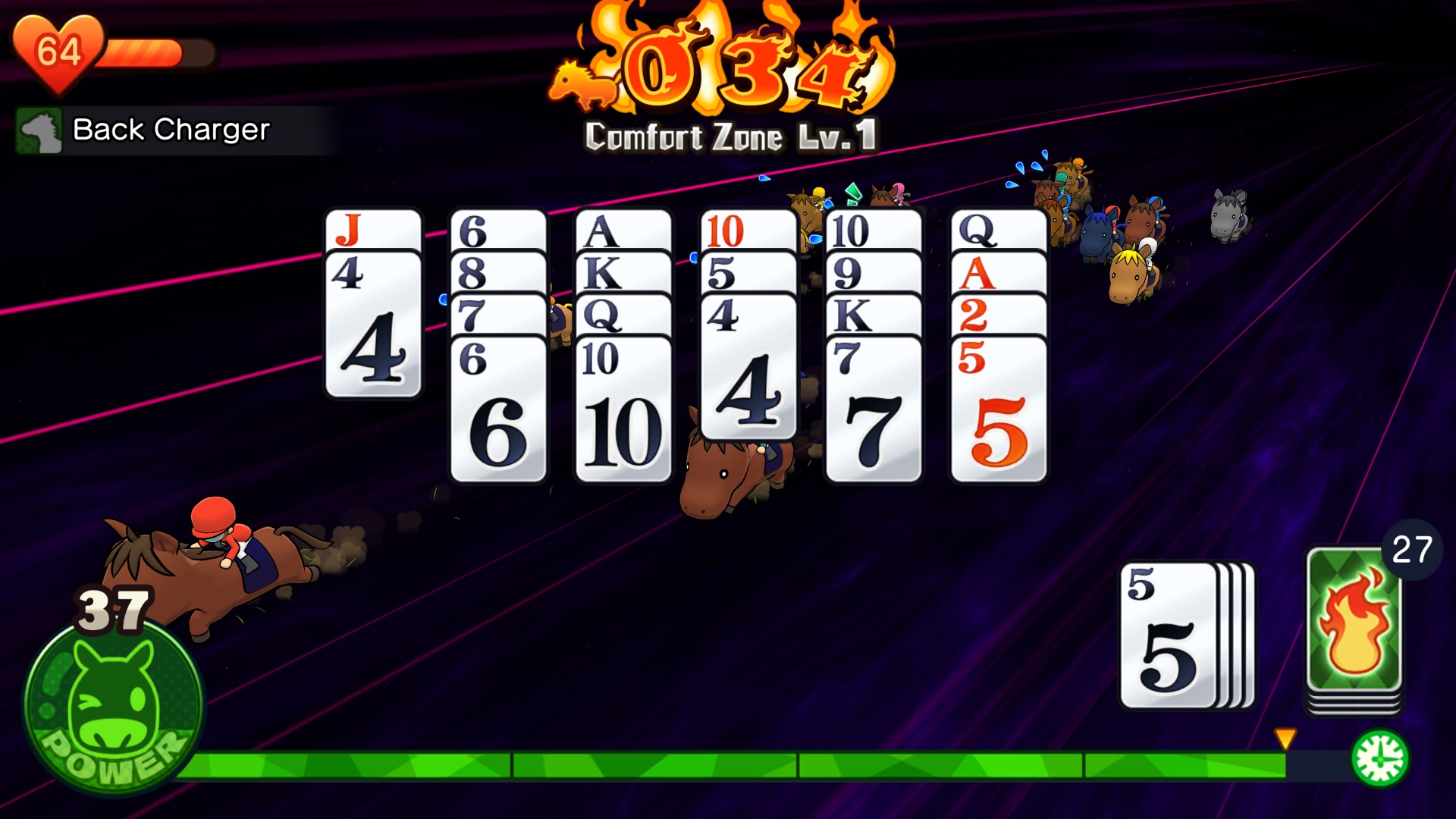 TA: The original Pocket Card Jockey was released on iOS in Japan, but it never saw an international release barring the 3DS version published by Nintendo. Were there plans to bring the original iOS release to the West at all years ago?

MT: No, we had no plans to do that. Like I said before, the smartphone app version we released in Japan was F2P, a model that required ongoing sales to secure the running costs, including server side maintenance. Given that it didn’t go so well in Japan, it would have been difficult to decide to expand it to the US and to Europe.

TA: Pocket Card Jockey was an interesting take on two different mechanics that worked perfectly. Has there been any change to the core mechanics for the Apple Arcade version barring bringing a dual screen game to single screen devices?

MT: The gameplay in this remake is essentially the same, but one point that’s different from the previous version is stamina control during races. In this release, stamina recovery cards are mixed into the solitaire depending on the positioning of the horse. The more stamina recovery cards there are in one position, the less energy there is to gain. So, the trade-off between stamina and energy is clearer than in the original.

You can play the game and win it without knowing this fact, but I think users will have more of a sense of wider strategies — like deciding in one race to focus on stamina recovery, or in another to go all out to gain energy at the risk of running out of stamina. Of course, if you make the right choice then your chance of winning increases. I hope users who are already familiar with the game keep this in mind when playing. 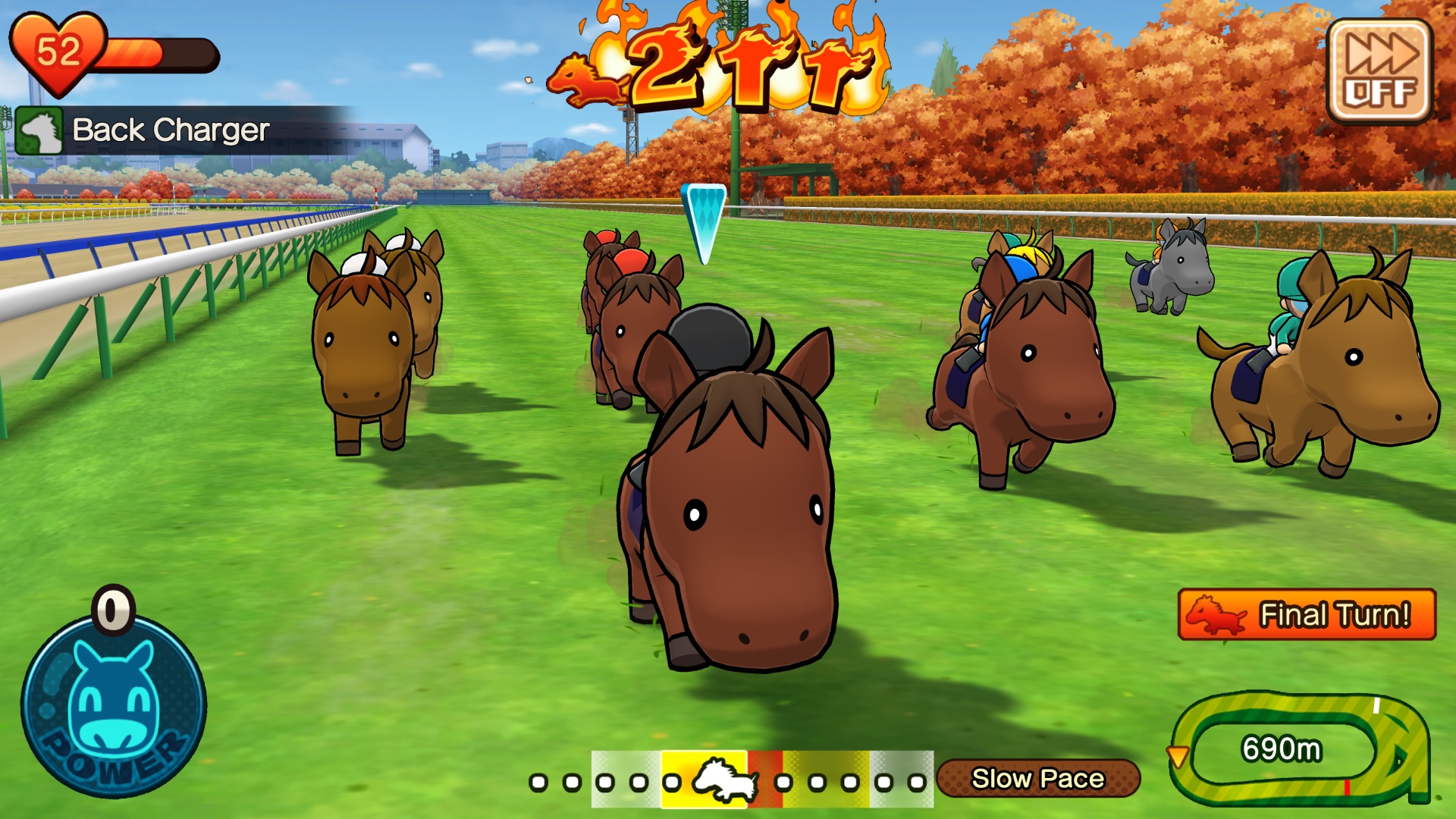 TA: Was there anything you couldn’t do for Pocket Card Jockey on 3DS that has now been possible with more powerful hardware on Apple Arcade devices barring the 3D races?

MT: The key point where we really made full use of the power of Apple products is the 3D screen. We’ve fine-tuned it so that it runs well even on slightly older devices, but also to enhance the rendering a bit more using the power of Apple devices with the new chips.

MT: A feature of all Apple Arcade titles is the ability to smoothly share save data among several devices. So, you can play games at home on your iPad, Mac, or on a big screen with Apple TV, then easily carry on playing it out of the house with your iPhone.

The use of 3D for the race scenes goes beyond enhancing the rendering. The relative positions of the horses and the special cards shown with simple symbols on the previous version (on the lower screen in the Nintendo 3DS) can now be shown in the 3D space of the race scenes. So, while watching the fascination of the race, at the same time you can keep your eye on the cards to experience both hope and despair of collecting or missing said cards. That’s one point I quite like about this version. 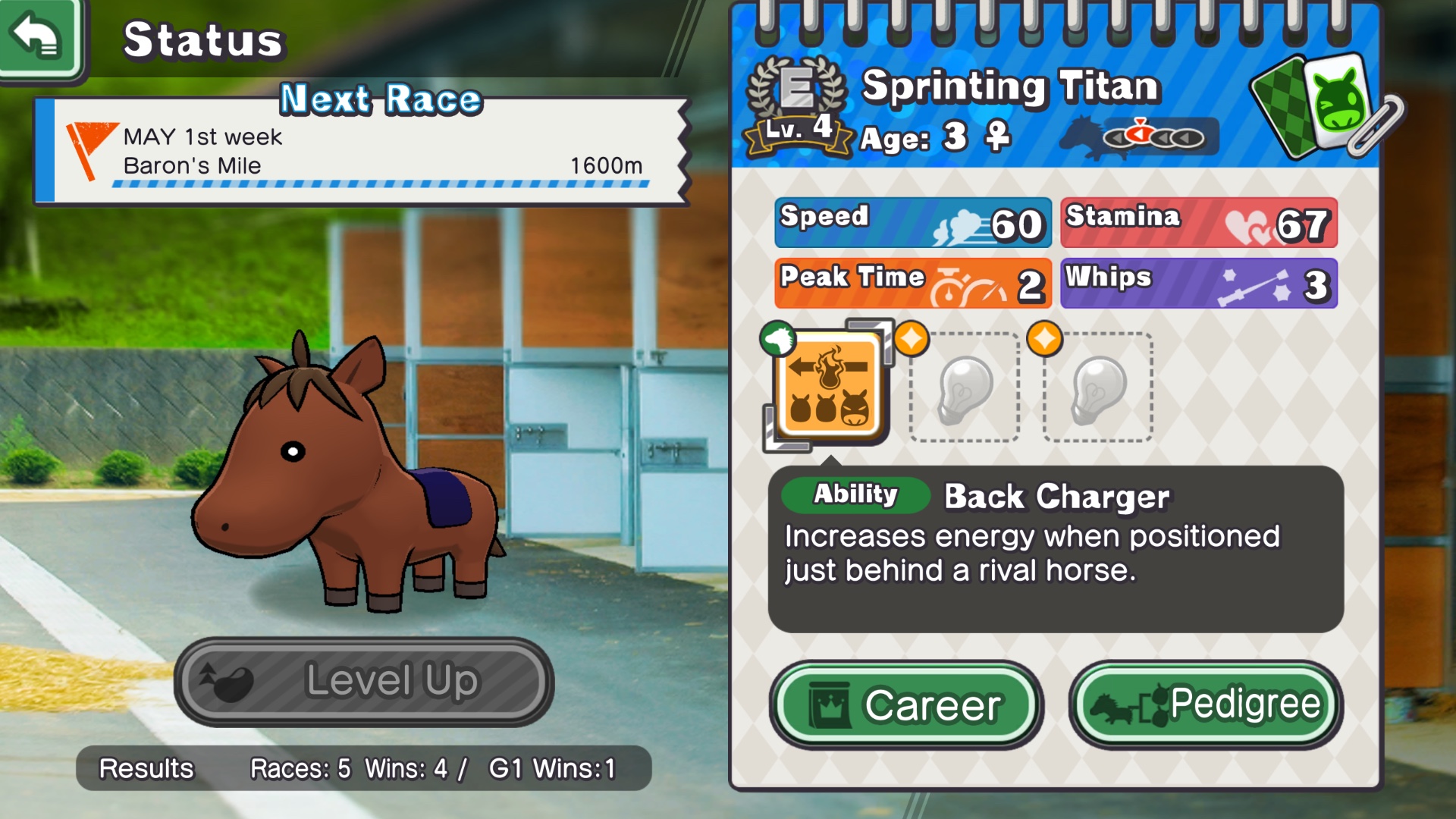 TA: Are there any plans to add controller support to iOS and iPadOS?

MT: Nothing has been decided on that at this moment.

TA: How has it been working with the team at Apple for Pocket Card Jockey: Ride On? Were they involved from the start to help bring this to Apple Arcade?

MT: Apple regularly gave us advice during development. They gave us feedback on some English expressions that are difficult for us to notice, which was quite a big help. Regarding the gameplay, they constantly said how fascinating it is, which created a really good atmosphere for us as we carried on with the development.

TA: I enjoyed Game Freak’s Little Town Hero quite a bit on Nintendo Switch for its combat, designs, and music. Is there any chance that can come to mobile in the future?

MT: Thanks so much! Unfortunately, we don’t have any plans to do that at the moment, but as the director of Little Town Hero, I’m happy to hear how much you like it. 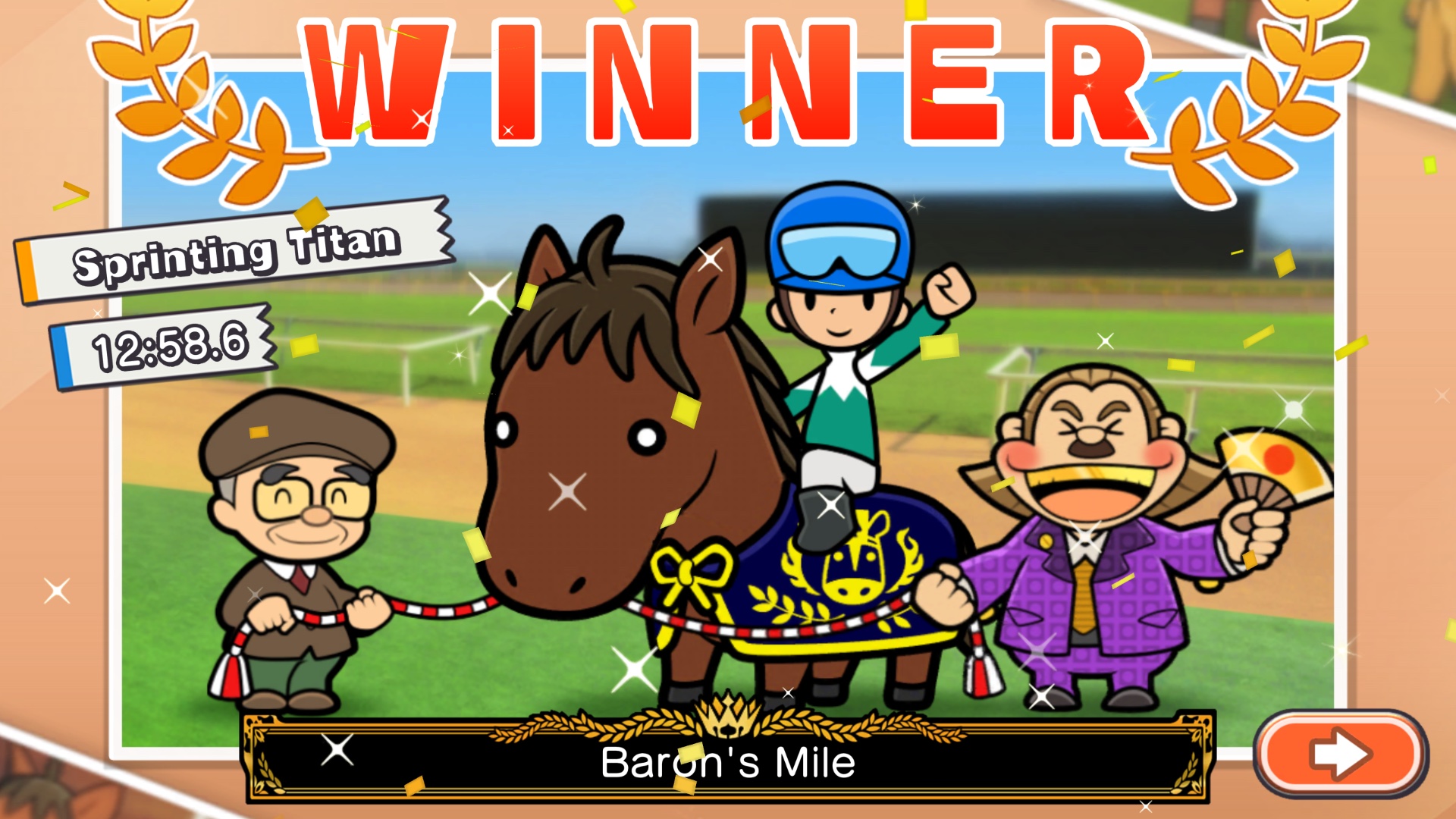 TA: Game Freak has a lot going on with recent Pokémon games including Pokémon Legends: Arceus that is my favorite game in the series. I wanted to know how the Gear Project at Game Freak has changed in the last few years and whether we can expect more of these more-creative smaller titles?

Masafumi Saito: The development scale of Pokémon Legends: Arceus and other Pokémon series games has grown, so having enough staff for Gear Projects has become an issue for Game Freak, but we have no intention of stopping work on making new games.

In recent years we’ve adopted a style of working on development in cooperation with other companies. We’re aiming to be able to work on bigger titles, as well as the smaller-scale ones, than we’ve had so far. We’re still going to bring out more games with the Gear Project that you can all look forward to!

TA: Can we expect more Gear Project titles to come to Apple Arcade on iOS in the future?

MS: This is our first game release on Apple Arcade, so firstly we want to hear the reactions of users who play it and see what they think of it. If it looks good, then of course there’s a good chance we’ll be able to provide other titles to Apple Arcade. I’m certainly hoping so!