When looking for puzzle games, there are always tons of options – but how many of those options include a bit of action and the ability to play against other players? PuzzelNite, the first game from Gamut Technology Enterprise, takes inspiration from retro games and spins their own twists into it!

With the likes of Tetris Attack and Puyo Puyo in the back of your mind, PuzzelNite is a competitive match-3 game where you will find yourself dropping two colored blocks, attacked to each other, down into your side of the screen. Your goal is to match up three of the same color bricks, causing them to disappear – which will then allow you to attack your enemy and move some cubes to their side of the screen.

When it comes to learning how to play, PuzzelNite is quite easy to understand. One side of the screen has arrows, allowing you to move your cubes (as they fall from the top) to the left- or right-hand side of the screen, while the down arrow drops it into place. On the right side, you can find a rotate button, allowing you to move these two connected squares and switch their place. 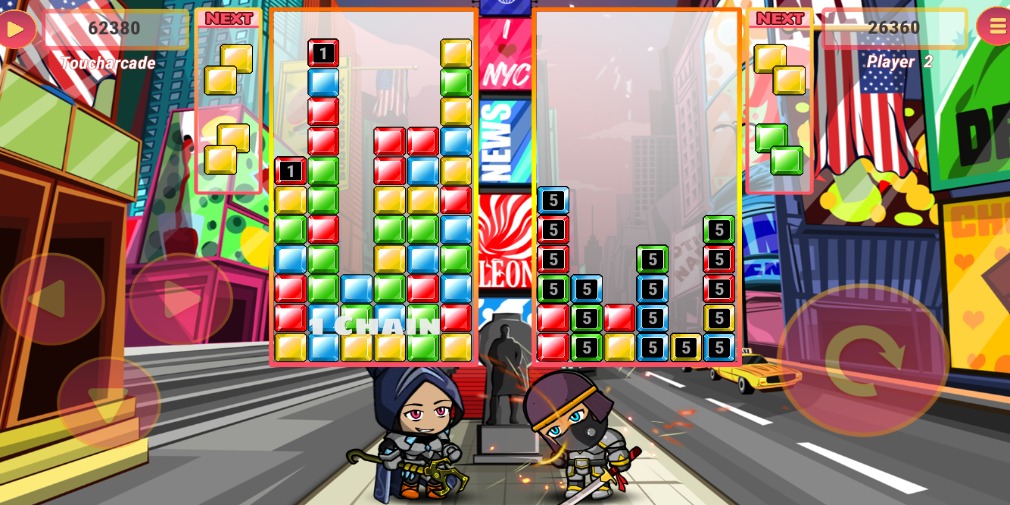 Connecting three needs to be something you do quickly, as if not you can become overwhelmed with blocks flooding in from the other side. There are a few modes in PuzzelNite, with more to come in the future, including a time attack and a ranked mode. The good thing about PuzzelNite is that the game only has you facing off against people as experienced and good as yourself. This means, you won’t find yourself against people who will swamp you in moments – unless you can handle it. In competitive games, matching a player with someone that they have a chance against but also who is up to their level always makes a massive difference.

When it comes to the game itself, it’s a free to play game, with no option to pay to win. You can unlock different customizations for your fighter character who sits below the game, fighting against the enemy’s character, using premium gems. As the game isn’t pay to win, it doesn’t feel unfair in any way.

In this day and age, being able to play along with other players, in real time, to challenge yourself at how well you are adapting to a game is quite a fun option. Watching your hero fight out for you, as you focus on your cubes and getting them lined up is an amusing way to spend an evening – and you might actually be able to make your way up the leaderboard.

If this sounds like your type of fun, make sure to download PuzzelNite available now on the App Store and Google Play.

This article is sponsored content written by TouchArcade and published on behalf of Gamut Technologies to promote their mobile puzzler PuzzelNite. For questions or comments, please email [email protected]