When it comes to space-faring roguelikes on iOS, the gold standard everyone’s heard of is FTL: Faster Than Light, and for good reason. It’s a perfect fit for mobile, and there are very few roguelikes that can compete with it in quality or quantity. While not as well known as FTL, Crying Suns ($8.99) has very similar notes of urgency and mystery.

Much of the game feels rather similar to FTL, though that isn’t necessarily a bad thing—what is good in FTL is also good in Crying Suns. That’s not to say it’s the same, though, because it’s not. This is most glaringly evident during combat, but also in other, relatively smaller, systems: Ground excursions, squadrons, and unlockable content.

Combat, rather than a high-seas exchange of broadsides between ships, is more akin to capital ships trading blows at range, deploying auxiliary fighters to counter and capitalise upon the enemy’s strategy. The result is a tactical experience, emphasising careful use of the resources at your disposal. Order your fighters too far forward and they may be destroyed, leaving you with a weaker force for the next fight. On the other hand, playing too passively may have the same result or, worse, end with permanent hull damage and a weakened fleet. Not an appealing prospect.

To aid in avoiding such an unfavourable outcome, each officer in your retinue comes with a specialty in squadrons, hulls, weapons, or a mix of all three. While it isn’t always necessary to fully capitalise on, say, a speed boost in two or three tiles, or a slightly decreased repair time, these small advantages can really add up. After all, sometimes the difference between a patched wreck and a fully operational cruiser is a fast disengaging action. Officer skills impact more than just combat, though. In addition to having ship specialities, each officer has a few areas of expertise which can reduce or entirely eliminate the dangers of ground excursions.

What are ground excursions, you ask? A grand treasure hunt virtually free of danger and rich with plunder and salvage—provided, of course, the necessary precautions are taken. First and foremost, having the maximum number of cannon fodder—I’m sorry, commandos—to deploy is essential; secondly, but equally important, is having a competent leader. You’ve gotta have grunts to do the heavy lifting, but determining what they’re lifting, how many of them make it back, and most important of all what they make it back with is entirely dependent upon who is leading your task force. If the assigned officer is well suited to the mission, the odds are in your favour. The officer will likely return intact with a majority of the potential goodies and few, if any, casualties. On the other hand, if they are particularly unsuited to the task at hand not only will they return with little to no goodies they may not, in fact, return at all. Put simply, a successful mission is determined by judicious risk management. 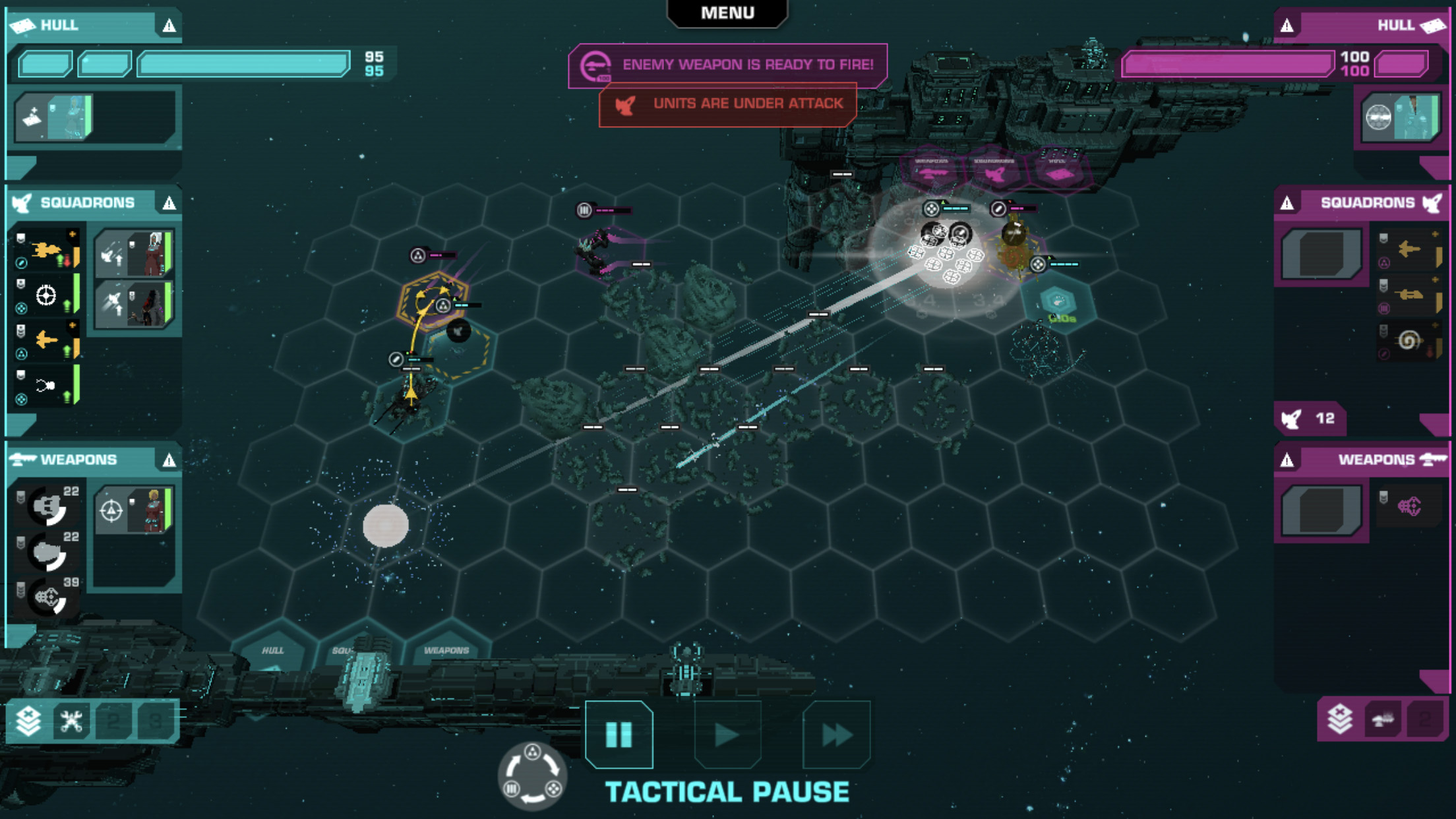 The idea of managing risk is a consistent thread throughout Crying Suns, although it would perhaps be better to call it opportunity cost in many situations. Upgrade your ship now and hope your ship and crew aren’t too badly damaged in the near future, or hold off and check out that station first… running the risk of a hard-fought battle that could put you at greater risk in future encounters. Investigate that system with the ground signal and a bunch of anomalies, or visit the system with a trade station and only a couple planets. Send commandos to board that mysterious and vaguely creepy wreck, or pass it by and hope there wasn’t anything good on board. These decisions, and many others, force you to choose between preserving your crew in the hopes of travelling farther, or potentially finding the solution to a roadblock just down the line.

This is juxtaposed, however, with the game’s overall narrative and the basic gameplay of a roguelike: Live, learn, die, repeat. No matter what happens in any given attempt, it’s okay. There are uncountable hordes of clones just like you back on the space station just itching to take your place, with all the knowledge you have accumulated so far. While it hurts to lose your ship, officers, and all the sweet toys you’ve picked up along the way, it ultimately has no impact on how the game develops. It’s just inconvenient. In other words there is no risk, and there is no cost to choosing, especially if the choice is wrong.

Despite that, you are incentivised to progress with the story not only with the promise of solving a mystery, but also with the promise of better ships and more options. Along the way, you’ll also unlock quite a number of specially grown clones of unique officers as you meet them. While I have not unlocked very much of anything as yet, none of the unlockables appear to be especially game-breaking, instead presenting new strategies, or more effective strategies, earlier. 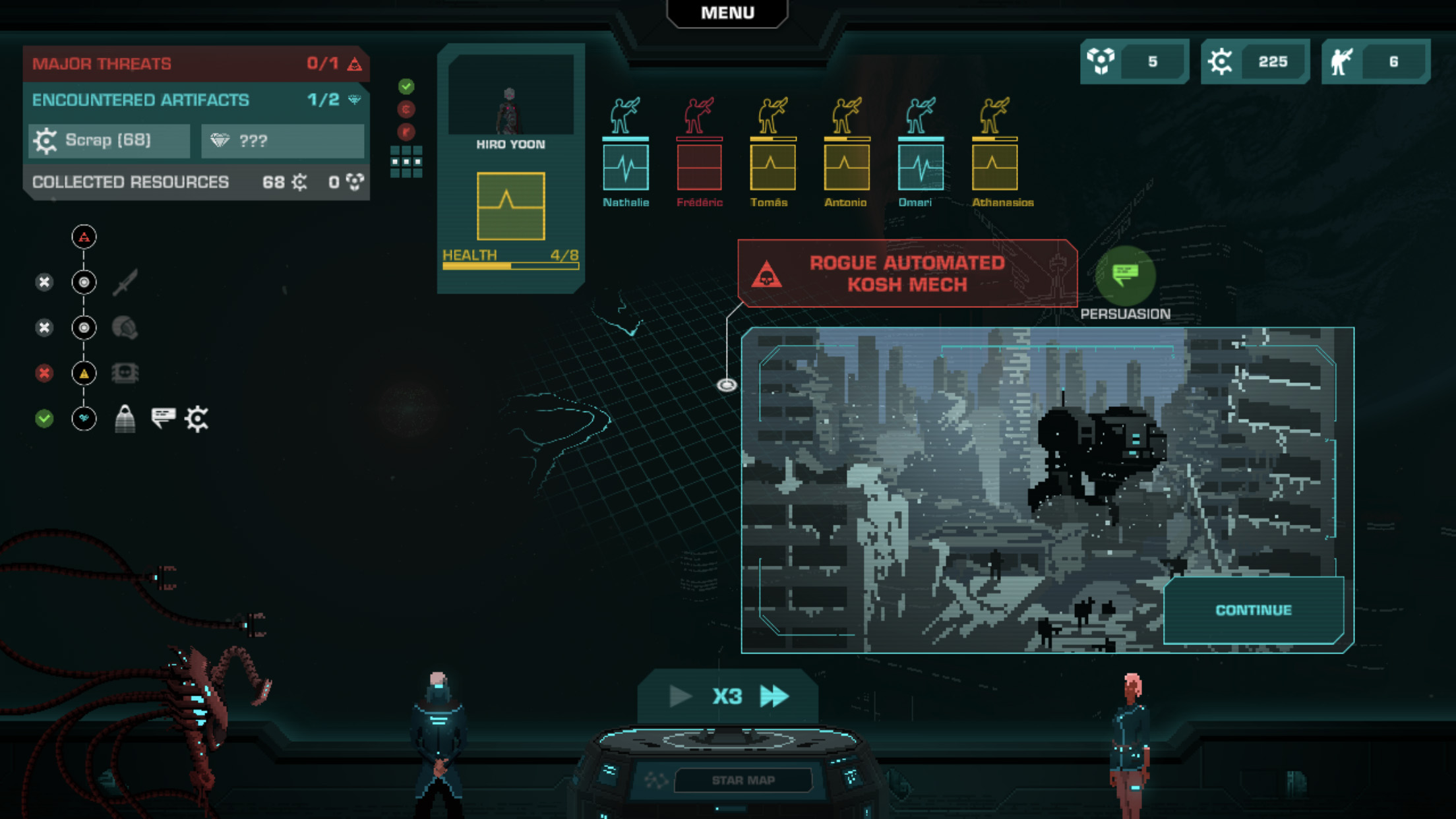 On the whole, Crying Suns is a lot of fun to play, if you like more strategic games. Encounters force players to effectively use asteroid belts and other environmental factors, well as well-chosen targets for a cannon, rarely letting you win with brute force alone. NPC encounters, positive or negative, are interesting and tend to have lasting consequences (lasting, at least, for the duration of a run), although they can be a little repetitive if you don’t progress very far on any single attempt. Taking it all together, all these systems—finding new encounters, star systems you haven’t been to before, new solutions to old encounters, and all the rest—there’s a sense of exploration and discovery that is quite wonderful, although the pessimist in me says it will wear off soon enough.

Crying Suns is a tactical game. More than that, though, it is a game of exploration, of mystery, and of reclaiming what was lost. Even though some parts of it seem to clash, the overall experience is very good. For those coming from FTL, the sense of exploration, the wonder of meeting new people and finding new places, is very familiar. For those who simply find the idea of fighting to restore a crumbling empire, helping the people trying to survive the wreckage, bring a semblance of order to dangerous territories, you’re in for a treat. Either way, Crying Suns is an easy recommendation for those looking to experience tactical gameplay with a extra helping of dark scifi frosting and a glaze of mystery.