Slay the Spire ($9.99) has finally arrived on iOS as a universal release after a very long wait. Everyone has been looking forward to Megacrit’s roguelike deckbuilder and Humble Games finally brought it to iOS over the weekend. I’ve been playing it for a few days now on multiple iOS devices and other platforms for this review and I can safely say that the wait was worth it with a few caveats.

If you’ve never played Slay the Spire before, it blends deckbuilding games with roguelikes. Attempting to bring multiple genres together is something loads of developers try but I was blown away at how well designed Slay the Spire is even months ago when it arrived on consoles. Since then, the game has received multiple updates with new content and the game has finally arrived on mobile through iOS. 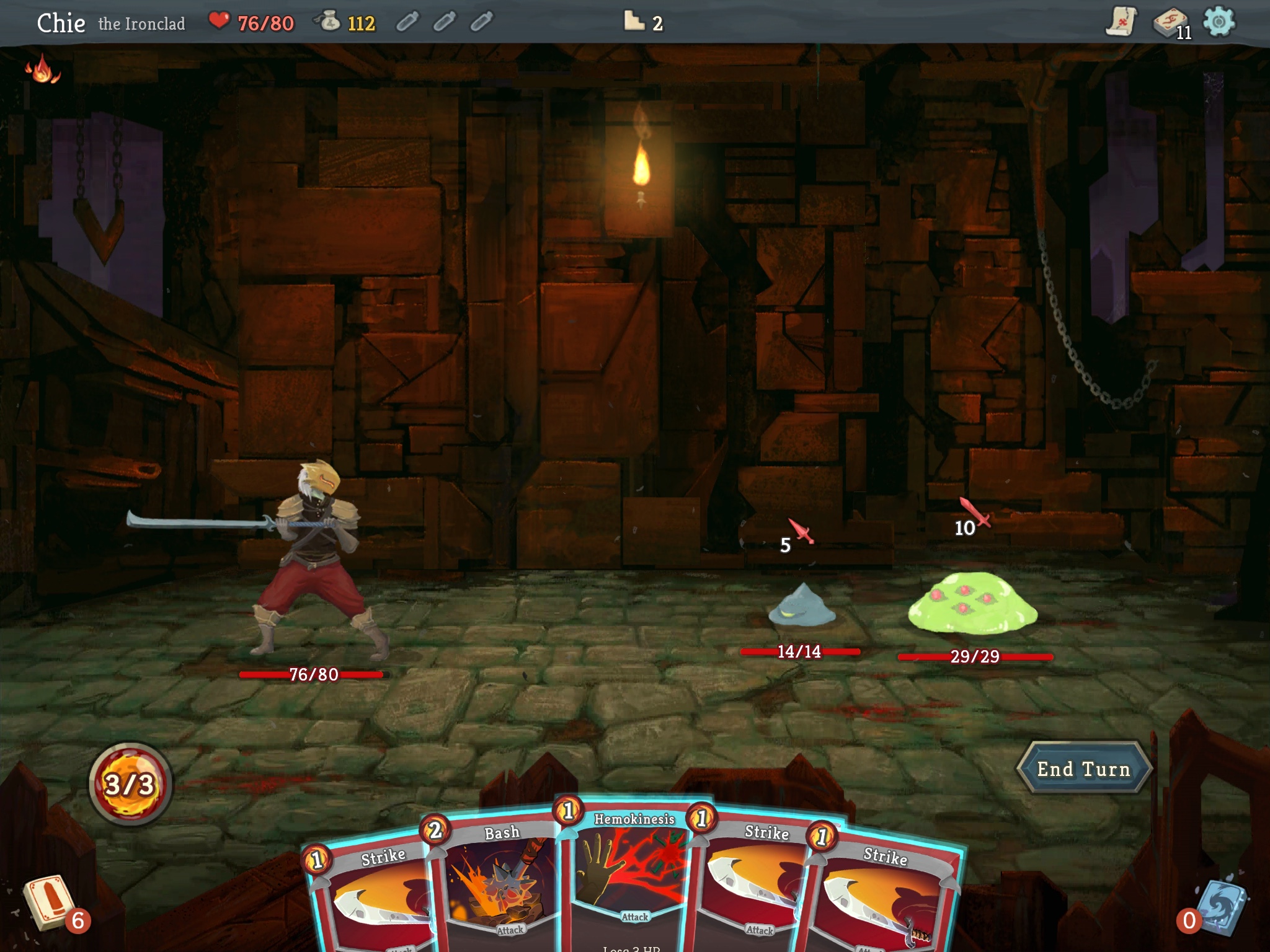 Slay the Spire has four playable characters that get unlocked through progression and through fulfilling a few requirements. They play very differently and I’d recommend sticking to one for the time being as you get your bearings of how the game plays and feels across multiple runs. Expect to die often as you learn to be better and you will definitely succeed as is the case with most roguelikes.

The basic flow of the game is you starting out the bottom of the map on the first act and your aim is to slowly climb upwards as you make decisions on which path to take. This allows you some freedom because one path can have a merchant while the other has a surprise unknown node. You decide what to do based on your health and needs at the point in the run. Nodes on the map range from elites (minibosses), enemies, rest points, treasure, merchants, and finally bosses at the end.

After every successful encounter or battle, you are rewarded with a card, gold, and sometimes a potion. The unknown points can result in you earning relics (like accessories in RPGs), battles, or events that give you gold or harm you. Each run is different and the blend of so many things together makes you always have to think on your feet.

The actual combat encounters have you facing off against one or many enemies in turn based card battles. Cards vary by playable character and they are of multiple types ranging from buff ons to defense and attack cards. There are also passive cards like curses and wounds that debuff or damage you as time goes by. Initially, the sheer variety of cards and new terminology might throw you off but the game does a great job with its visible tooltips that remind you what everything is.

The deckbuilding aspect of Slay the Spire is something you will learn only with multiple runs as you familiarize yourself with the mechanics, enemy types, and various possibilities the game throws at you. There’s a strategic element to not just the actual battles but also choosing a path on the map and deciding when to upgrade a card or which card to choose as a reward. As you die or succeed in runs, you will unlock more cards and this is the real draw of the game. Optimising your skills, cards, and abilities to beat the game with as little damage as possible or just succeed in completing one of the three acts will likely be the first goal you work towards here.

In terms of game modes, standard is a regular run as the name suggests where you pick one of the unlocked characters and try to reach the end of the three acts. Daily climb is a daily challenge with its own modifiers that has you competing on leaderboards. Custom mode disables achievements but lets you play around with the modifiers, ascension (challenge modifiers), and more. 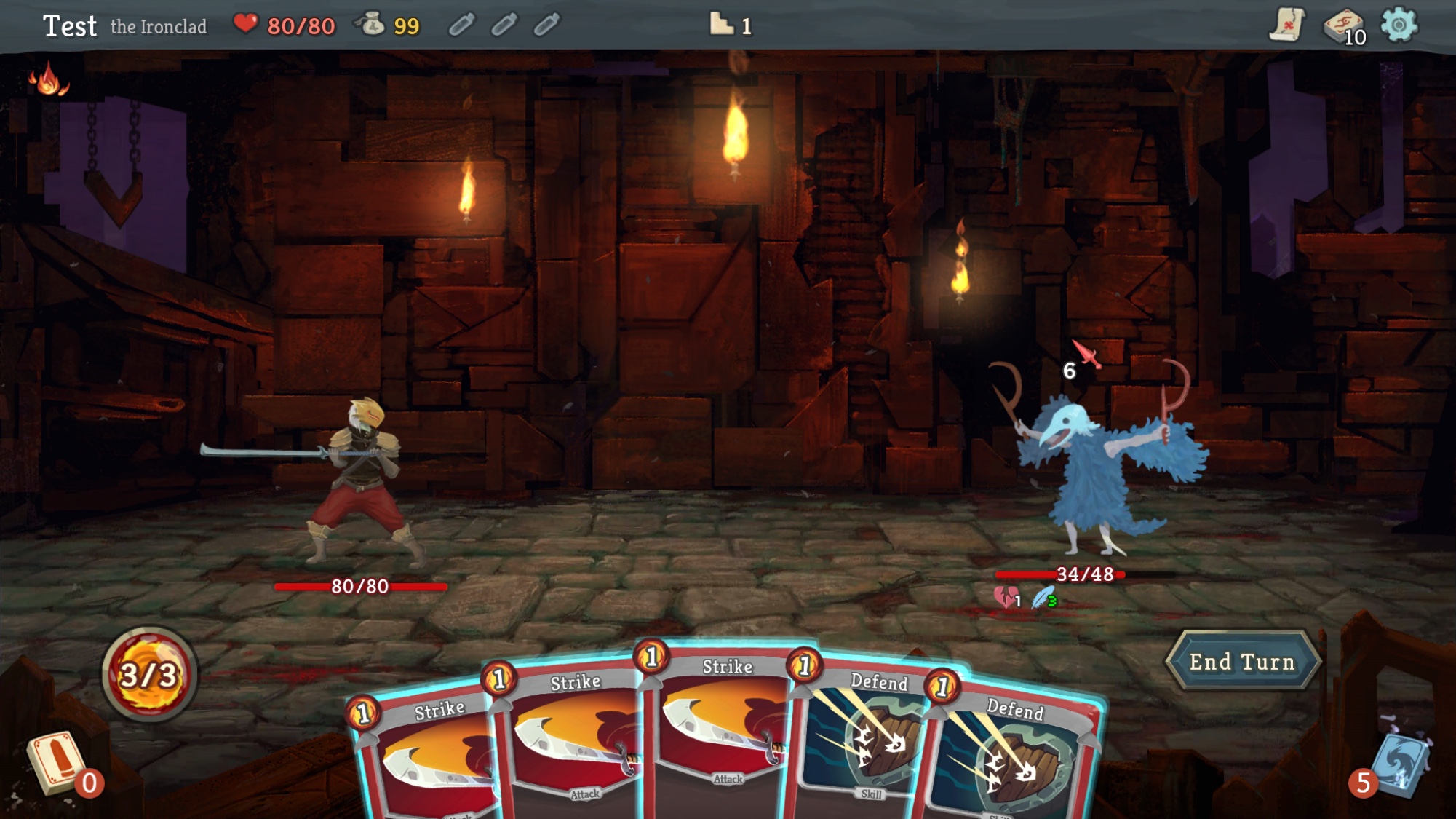 Slay the Spire as a game is amazing and one of the best roguelikes I’ve ever played. It will likely join Spelunky and Risk of Rain as one of my favourite roguelikes ever but the iOS version needs some work. As an initial release, it is good on many devices and bad on others. There are some features that I find the absence of pretty baffling right now and others that are understandable for an initial release.

The biggest problem with Slay the Spire on iOS is how the interface touch targets don’t seem to have changed much if at all across devices. This allows for a much more comfortable experience on iPad versus having to get used to very small touch targets on iPhone. Before the game released on Saturday, I spent about a dozen hours playing it on iPhone 11 and have since been playing it on iPhone 7 Plus, iPhone SE (the smaller older one), and iPad Air 2. If you played Slay the Spire on Nintendo Switch in handheld mode with touch controls, you will feel right at home here. 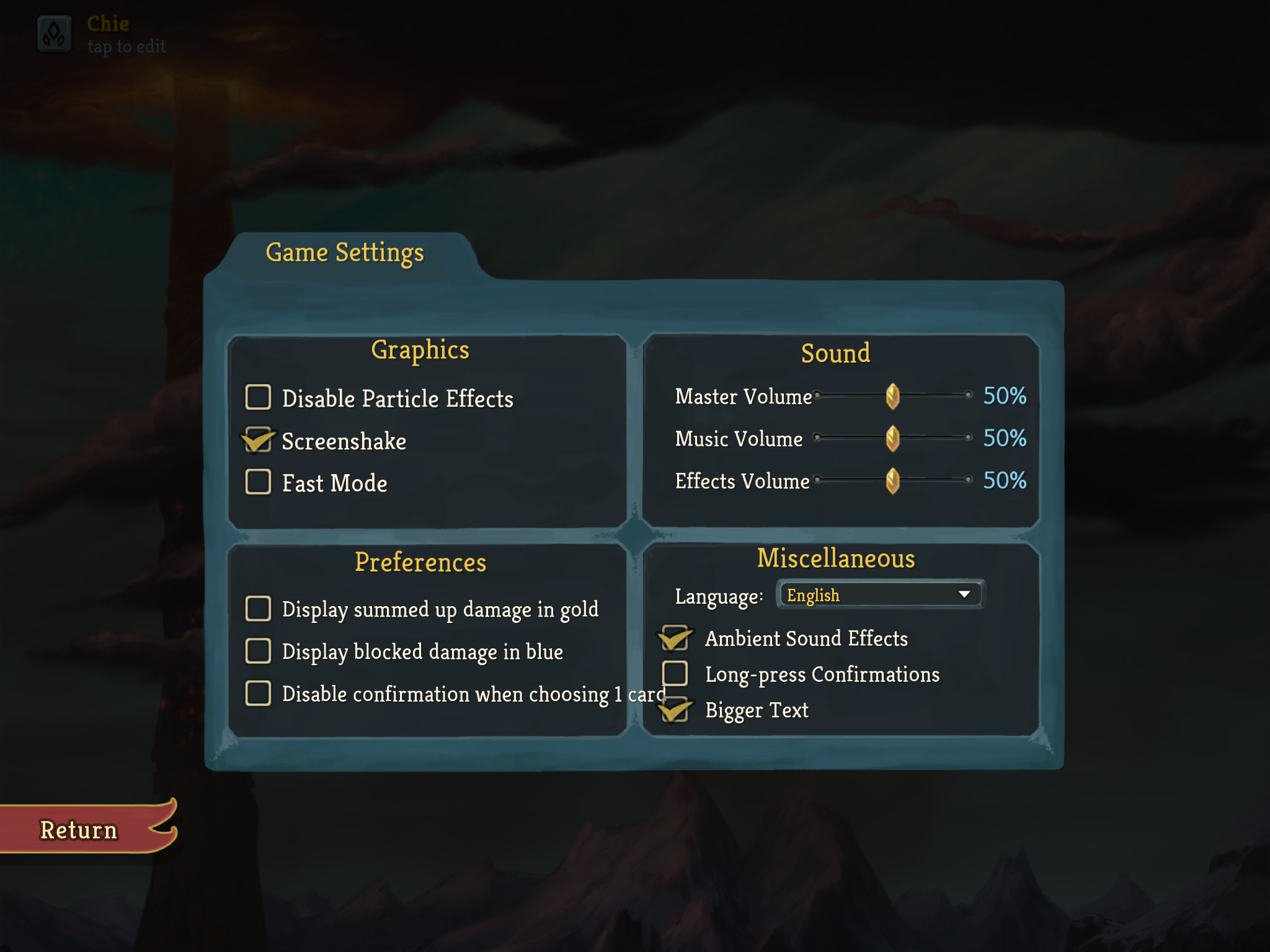 Interacting with cards and enemies can be done in two ways. You can drag a card to an enemy or tap on a card and then on an enemy. The card interface has one issue that relates to how it behaves when you tap and hold. If you tap a card, it moves up and lets you see the flavour text and the card. If you tap and hold, your finger covers a part of this. It would’ve been better if the iOS version would behave like Hearthstone here where the card isn’t obfuscated by your finger when you hold. Interactions with cards in your hand need work here. This system works well on PC with a mouse where a mouse over highlights and brings up a card so to speak but your finger is much larger than a mouse pointer and this is where the biggest interface problem for core gameplay arises. I also noticed a minor text wrap issue where one settings screen option had text overflow to the next part of the interface as shown in a screenshot above.

While not a huge issue in a game like this, I expected Slay the Spire to run at a higher frame rate on newer iOS devices. The load times are super fast (even compared to Xbox One X which has some freezing before boss fights) which is appreciated but it is disappointing that the game runs at a lower frame rate almost all the time compared to seemingly everything including Nintendo Switch. Hopefully this can be addressed in future updates. I’m also a bit confused about why controller support wasn’t included in this release. Slay the Spire is fully playable with a great controller interface on consoles already and while touch is no doubt the preferred way of playing a game like this, controller support would’ve been nice to have as an option.

The big deal breaker for many people will be the lack of iCloud save support. For a game like this that involves unlocks and multiple runs, the lack of save syncing across iOS devices is baffling. This almost makes me want to go back to playing Slay the Spire mainly on Nintendo Switch since it syncs using Nintendo Switch Online cloud save backup and it lets me play on TV or on the go with touch or button controls. When this port was initially announced, I was hoping for save sync or a transfer like Stardew Valley to be able to bring PC progress to iOS but the lack of any sync even between iOS devices is disappointing.

Barring the issues I mentioned above, podcast enthusiasts or players who enjoy listening to music while playing games like this will need to manually resume playback of any audio as a workaround because Slay the Spire mutes audio on launching.

Overall, Slay the Spire on iOS is definitely worth getting especially since it is the full experience at less than half the price on other systems, but the lack of iCloud save support and interface changes for smaller screens holds this back. If you only want to play it on iPad, it is excellent but still needs some UI work. On the iPhone the answer is a bit harder because while it plays great on iPhone 11 and even iPhone 7 Plus, I found it nearly unplayable on the small iPhone SE.

If you only have one device and don’t mind some small touch targets for the interface, Slay the Spire will easily be one of the best games you play on your iOS device. Once these issues get addressed, I can see Slay the Spire becoming one of my most played games on iOS after it has already been on that list on Nintendo Switch and Xbox One in recent months.