I’ve got to admit that I’d previously never been a fan of the Steven Universe show. At first I thought it was just another silly cartoon show with a dumb character going on mindless adventures. It wasn’t until the show ended that I learned more about its story and its lousy final season. It wasn’t “Game of Thrones", but it wasn’t what the fans expected.

That’s why I decided to try Unleash the Light out, a new RPG that follows a new Steven Universe story co-written by Rebbeca Sugar, the creator of the show.

The game starts when Steven is finishing the new rules for Era 3. Yellow Pearl tells Steven there are still two Light Prisms active that they need to retrieve from two other Gems called Pyrope and Demantoid. Steven doesn’t want to retrieve the Prisms by force, so he decides to call the Crystal Gems so they can talk some sense into Pyrope and Demantoid without using brute force. This proves to be unsuccessful, and this is where the adventure begins. 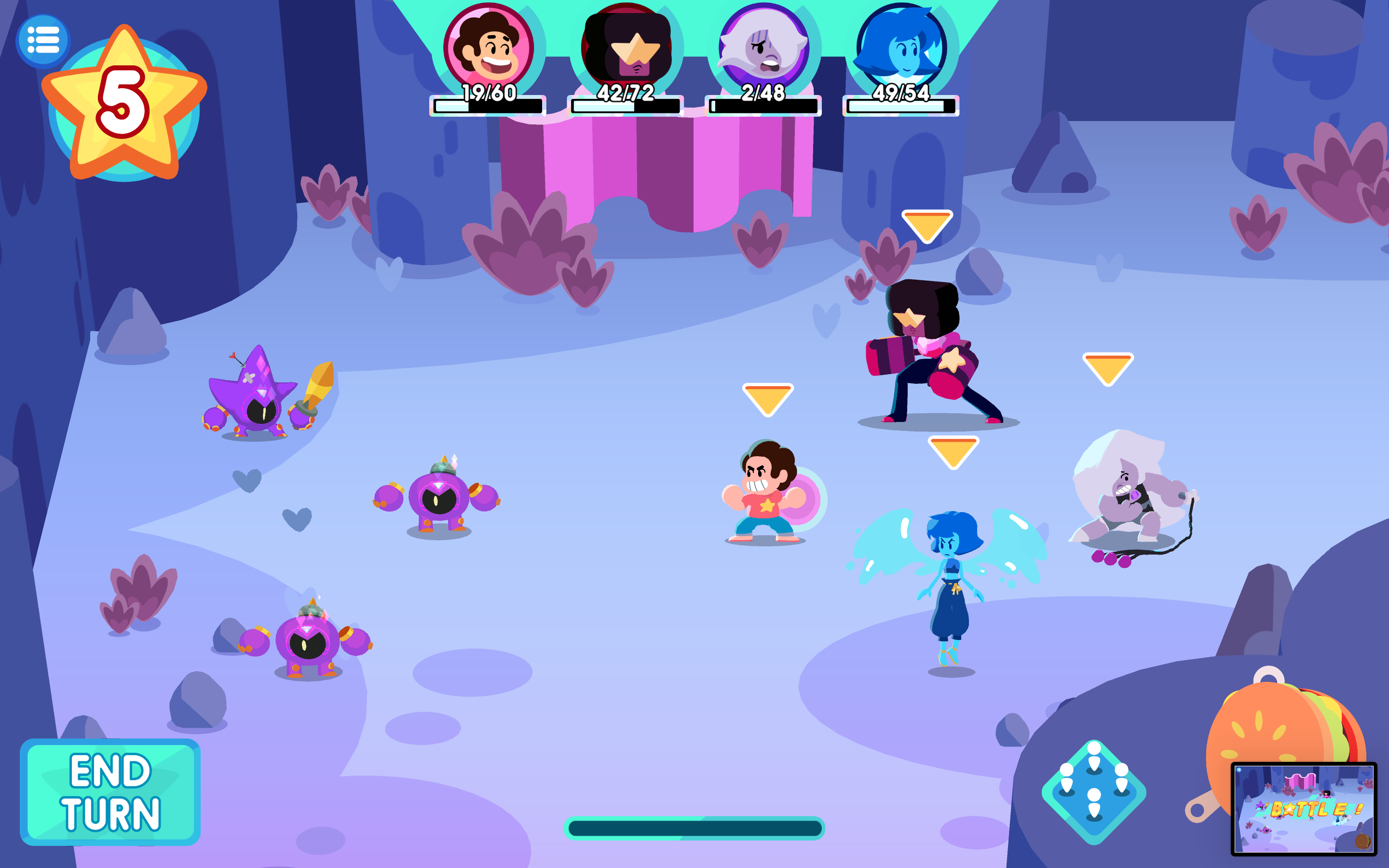 If you’ve never seen the show, you’re probably as confused as I was when reading this story. Trust me, it gets weirder. Fortunately, this doesn’t really affect the experience of the game. Sure, knowing what the Era 3 is, or what the Prisms do is a big plus, but playing this game as a total newbie is just as entertaining. Plus, I’m sure there are RPGs with weirder stories out there.

Throughout the game you’ll travel to different sections on different maps. Each section is packed with enemies, treasures and some hidden places for you to explore. You won’t travel alone, though. You’ll have control of a party of 4, which includes Steven and 3 Gems. You can swap members of your party as you progress through the game.

Just like you would expect from an RPG, you can level up your characters and gain points to improve their skills and abilities. You can also find items for each specific character that’ll give them a boost in stats. 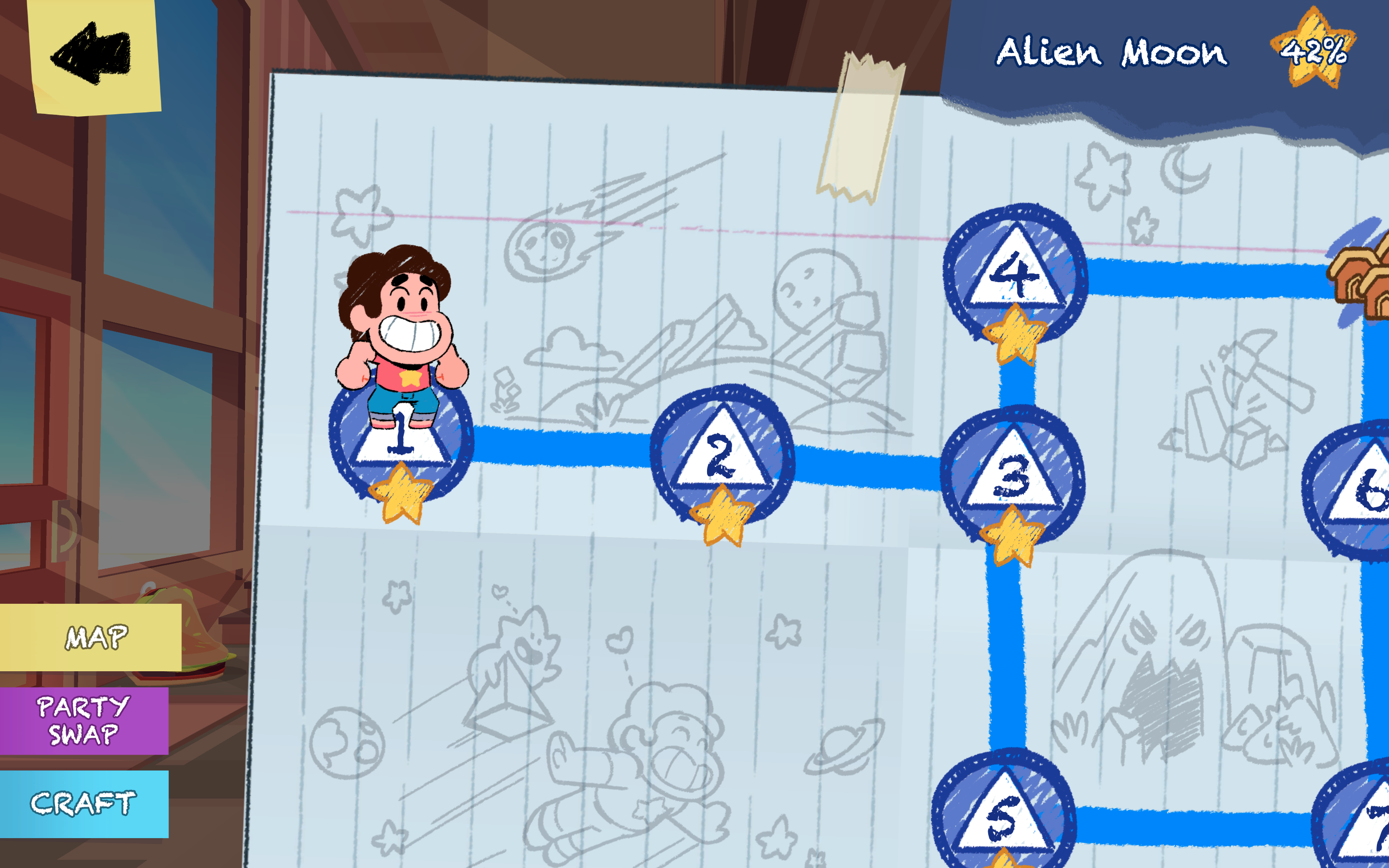 Don’t be fooled by Unleash the Light’s looks. Despite its colorful environments and cute and unique characters, Unleash the Light is really difficult. Each area you go to has a lot of enemies that you can’t avoid. Once you are in the same room they’re in you’ll have to battle.

Battles are turn-based and you have a limited amount of attacks per turn. Every time you attack or defend, you need to tap the screen to make a perfect block or to deal more damage. The timing is a little bit tricky but you’ll get better at it with practice.

The hardest part is that you don’t get healed up after every battle. Sure, I understand that’s normal in some RPGs, but in Unleash the Light you don’t get healed ever. The only place you can heal your team is on a platform that doesn’t appear on every level. Also, you can only use it once. Besides that, you have to keep your team healthy with items you randomly find or by using one of Steven’s moves.

Truth is, I actually liked the difficulty in the game. It does get frustrating, but thinking about health, moves, timing and even the position of your team gives you a new level of strategy that you might forget for how easy some games are.

Unleash the Light is an Apple Arcade gem (pun intended). It gives long-time fans a new story with the original voice cast to revisit a beloved universe by a large community. And its interesting story, challenging battles, and easy-to-solve puzzles will keep newcomers hooked to the game and craving for more about the franchise and its weird but compelling lore.

NOTE: Unleash the Light is available on mobile exclusively as part of Apple Arcade, a premium gaming subscription service from Apple. Without being a subscriber to Apple Arcade you cannot download and play this game. Apple Arcade is $4.99 per month and does come with a free one month trial, you can learn more about it on Apple’s official website or by visiting our dedicated Apple Arcade forum.