Here at TouchArcade, we like to keep our finger on the pulse of innovation, no matter where it might pop its head up. We were able to dig up some gems that really show creativity on display at Pax Unplugged this year and we wanted to share a few with you, dear readers. Pax Unplugged has grown every year and the convention center flow was awash in boardgame euphoria. Interestingly enough, the games that showed the most innovation have their roots in the digital world and we thought, how fitting.

Our Pax Unplugged coverage usually covers either digital or physical adaptations as games cross the barrier from one side to the other. The really cool part of Blinks is that they comfortably straddle both sides simultaneously. Looking at a table set up for Blinks you could be forgiven for making the mistake that this is a simple game.

This isn’t actually a game. Blinks is a game platform. Each puck you see on the table actually contains a different game that it can teach other pucks how to run if you connect them together. I was able to see the Astro action game and Mortals strategy games played during my time at the booth and even though you have the same physical components, each game has some very different goals and pacing. 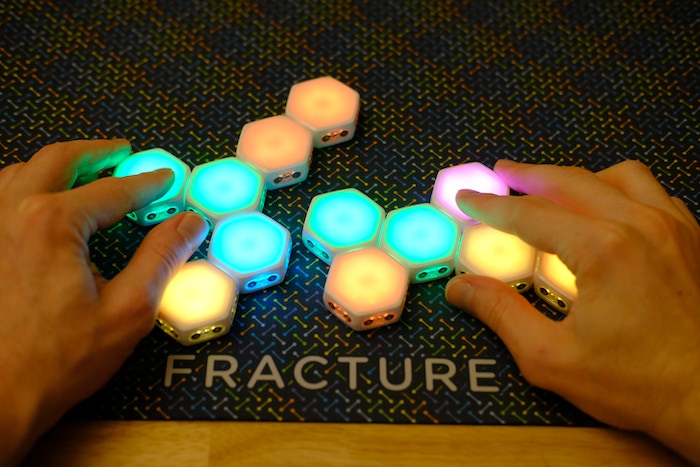 The real meat and potatoes here, however, is not the individual games, and it’s not even the very cool LED display you see on the table top. What really excites me about Blinks is the potential a gaming system like this has for technology integration. Imagine miniatures with a smart base. Imagine a wargame with an app that communicates with each of these little computers sitting on your board. I was able to speak with Jon and Ishmael at their booth and I am excited by the where this system could go.

The actual devices have a very solid design, each side of the hex has magnets that connect to adjacent hexes and the button feels very aesthetically pleasing. After having gone through many iterations, it feels like the touch and magnetic responsiveness of these devices feels just right. With a dev tool kit they have included with some of their sales packages, this is a sandbox of adventure just waiting for more ideas to gestate. 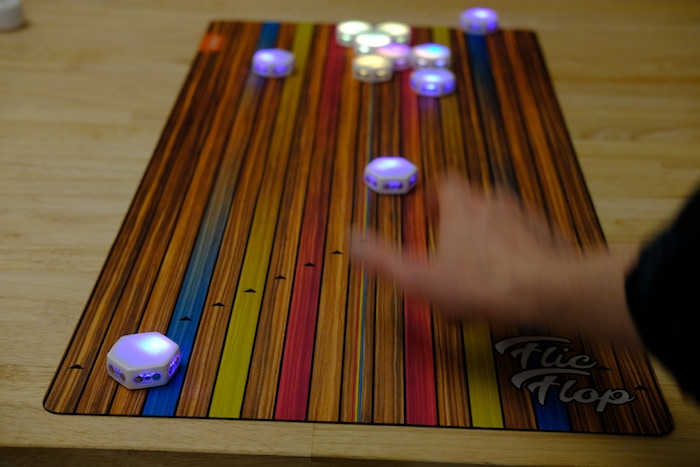 Getting access to this booth was pretty tough, the crowd around the Blinks booth was always healthy and the short duration games with blinking light were attracting a ton of attention. Even with the huge potential this product has, excitement is high for the here and now. Blinks has been selling fast and kids love it. My 11 year old daughter was hooked immediately and even began teaching herself multiple games just while Jon and I were standing and chatting. This is a product that is super fast and easy to learn about and that growth potential is tremendous!

Of all my interactions with game makers and fans and media folks at Pax Unplugged, the most exclusive meeting I had was with Kieron Kelly, Product Manager at Larian Studios as he demo’d the prototype for the Divinity: Original Sin board game. We sat down in front of this game, demo available by appointment only, to see how well Larian and partner company Lynnvander could take a complex turn based strategy game and turn it into a tactile analogue experience. My first impression was, oh… where is the grid? this is Divinity right? turn based strategy right? how come there is no grid? Well the answers were soon to come and I was delighted to find that the heart and soul of a turn based grid system are alive and well in this game and might even be improved upon in some areas. 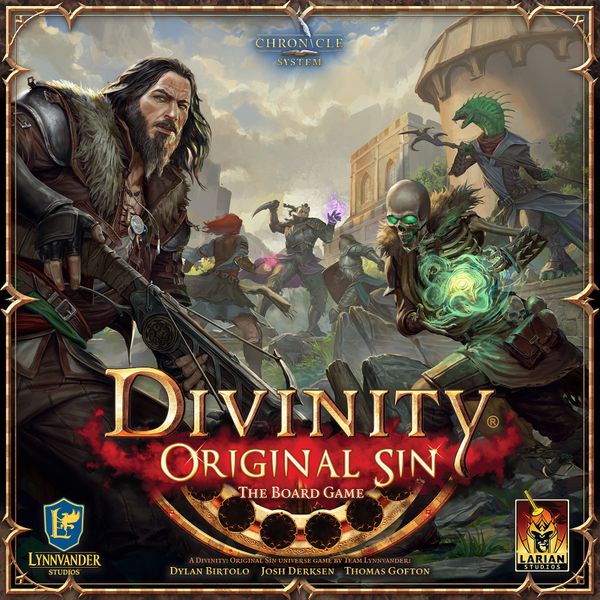 Divinity: Original Sin is a complex game and has a complex title, and logic dictates that further complexity would be required for an analogue translation, but this team has proven that is not the case. What they did was distill down what aspects of the game were fundamental. Combat, exploration, story driven experience were the things they wanted to preserve. Exploration and Story feel very strong and the combat, while a little different, flows smoothly and still strikes a great balance between depth and accessibility.

The story components of the game are a bit like a story book game. I mentioned to Kieron that I had played a little Sherlock Holmes Consulting Detective and got some similar vibes. This is basically like a choose your own adventure but with the ability to unlock new branching plot lines based off of what has already happened in game. The story, or fluff, of the game isn’t left to twist in the wind however. Exploration and Combat are almost inextricable in Divinity: Original Sin, the ring of cards around the board edge function both as grid locations in combat and exploration tiles in the area you currently are in. Even while in combat, you flip exploration cards as you visit any spot that has not been explored. In this way you can actually trigger multiple combats simultaneously. The game keeps the pace active as you only have a certain number of rounds to explore outside of combat. Going to one spot at a time as a full party might be the safest approach but you won’t get everything explored you might need to. 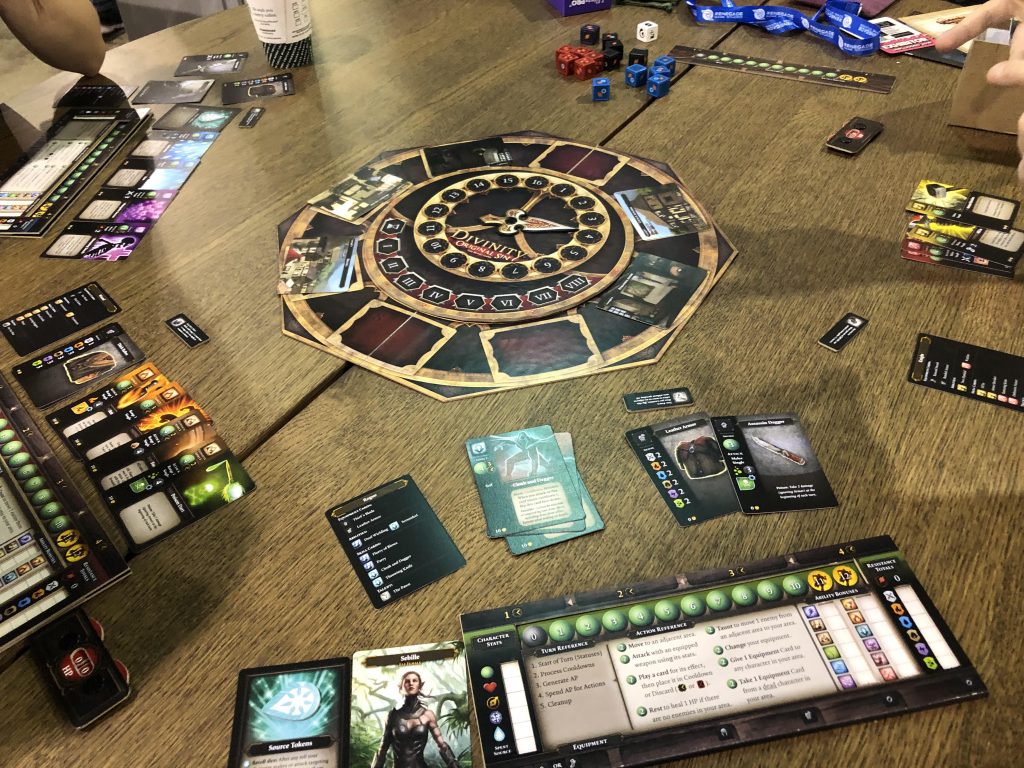 The biggest departure from the video game from what I saw was not the removal of the grid, but that of the re-configuration of armor. Instead of having physical and magical armor, each character has separate resistances for multiple elements including physical damage. Many skills, locations and items have an effect on your resistances and once resistance is broken, much like the video game, a lot of damage will start getting applied. The spirit of the combat of Divinity: Original Sin is very much still here although many times you will see one elemental resistance go down and others go up, so the biggest difference is probably that magic armor does not apply as universally which isn’t a bad change! The way this game takes the storyline and builds its blended combat and exploration bits on top of it is really a wonderful way to experience story without being relegated to sitting through long bits of text. The small location cards let you break up the story into bite sized chunks that don’t put the rest of the game on pause.

Overall Divinity: Original Sin the board game delivers a very true to digital experience in a format that feels like it was designed to remove stress or unnecessary complexity. I cant want for it to hit production because it’s going to be fantastic. I can see many expansions in the future for this one, possibly even a framework for other RPG IPs. The link they created between combat and exploration is a really solid mechanic that lifts the burden of complexity off the game very well.