Amidst a hail of broken english, Developer Jungyu Lee drops you directly into the action of Raid Manager ($1.99). Much like this review, you get no preamble or warning before you have to fend for yourself. The start of the game is indeed quite abrupt, and more than that quite confusing. The slightly unintentionally funny dialogue quickly gives way to a UI that is maybe a bit busier than most and a pat on the back as you embark on your journey. There is a decent amount of cannon fodder for a critic in this game but lets dive in because there are some fun bits and pieces to this game that make it an enjoyable ride.

Normally I reserve my early paragraphs for basic game description, but I want to take a moment before that and talk about what Raid Manager isn’t. Raid Manager is not a big name premium title churned out by an army of underpaid programmers driven by whip and drum to meet industry standards. Next Phase, from what I can glean, is a very small company. They do not have a huge catalogue of apps, this game stands alone under the Jungyu Lee name. Every single comment on the App Store has been responded to and after just releasing they are already on version 1.7.7. This game oozes passion project and I have to admit I am a sucker for it. 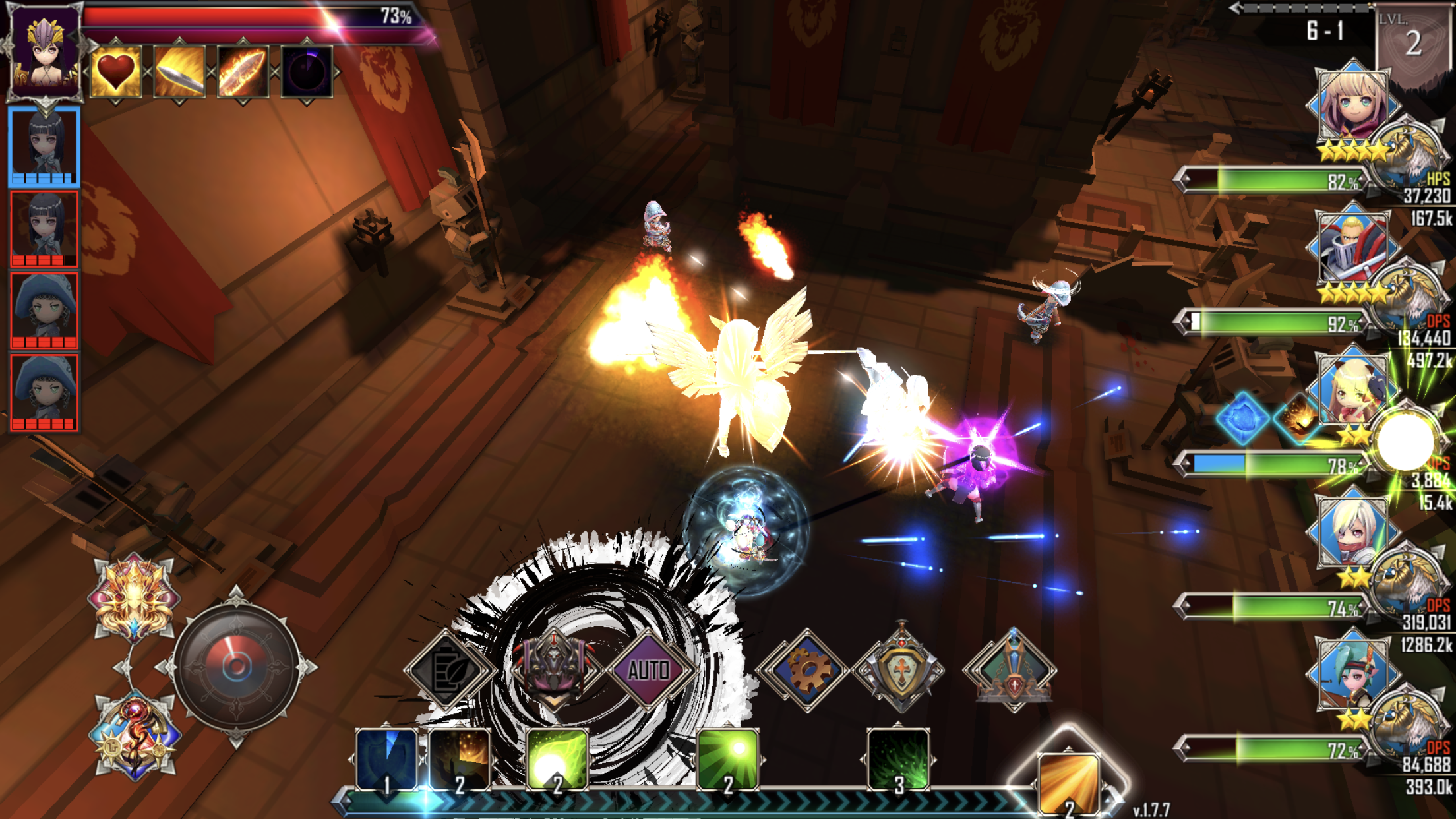 So, now that we are past what it isn’t, what is Raid Manager? You are put into the support role seat of an MMO simulated environment. Your job is to keep your team alive and acquire levels, gear, teammates, and skill points. All of this is encased in an auto-clicker style gameplay loop that admittedly does little to distract from a pretty straightforward sloping power curve that needs to be brute forced whenever your party runs aground against a foe you lose to. Die to a fight? Level up, gear up, grab some more skills and you get to move on to the next fight, so on and so forth. Your abilities include moving your healer around, and tapping and holding down on teammates while the bar at the bottom fills. There are individual abilities that get cast if you stop the bar on them and each ability has a cooldown on it. The pace is frenetic and for the most part you can leave the game on auto-play and see solid success.

Something I found quite amusing about this game is that there are a few accuracies that seem to be purely unintentional. The broken english and repetitive grind make me feel more at home in an asian-style MMO than maybe anything else about this game. I say this with affection but it makes me laugh thinking how close this game is to a spiritual successor of the .hack games. The story line premise that you are operating within a game world is nothing new, but in many iterations, like .hack, the MMO genre is resoundingly unfun, annoying and repetitive. I’ve always wondered if those qualities are a true reflection of the developer’s opinion on online games or if they are simply used as a shortcut to avoid making more complex systems. While it may be a mystery, I do enjoy speculating. 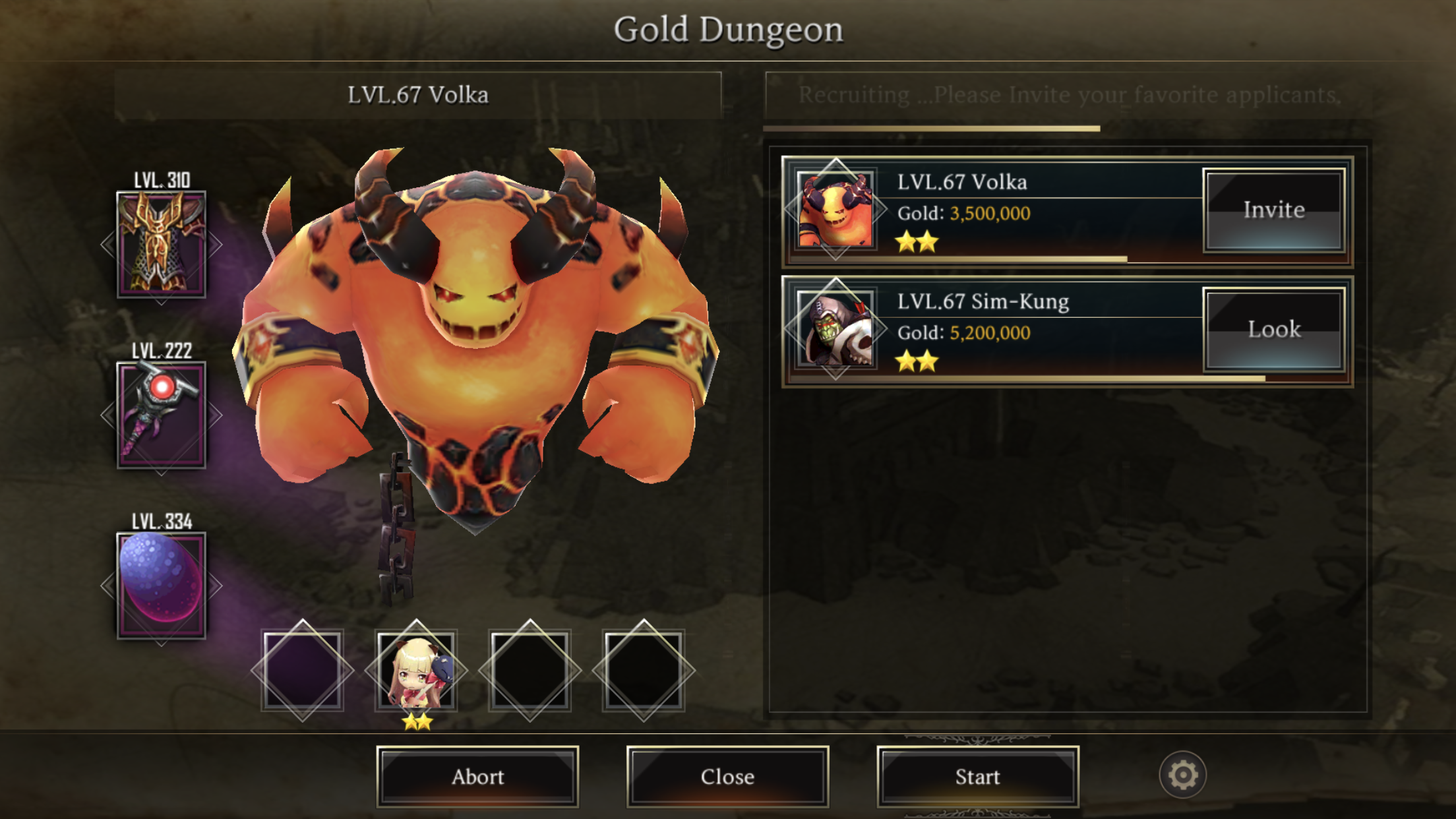 The clicker style gameplay has a few areas of progression. There is the normal raid chain of fights that you slowly become better and better at. Heroic dungeons is an area where you can end up recruiting teammates. Dungeon of Trial rewards currency that lets you improve your skills and talents. The final one I want to mention here is the Gold Dungeon. This one is cool and fun and makes the whole game pretty cool and fun too. So the Gold Dungeon follows the familiar format of running face first into encounter after encounter until you die. The big difference is that you get to recruit extra powerful allies who can help you clear even further than normal. Every time you clear an encounter in Gold Dungeon, it drops epic loot. The BIG wrinkle is that your recruited allies will start a bidding war with you to claim the loot for themselves. Gold Dungeon has an auction system built on top of it and is simultaneously the primary source of loot and gold in the game. Don’t like an item that drops? Drive up the price then have your allies pay you gold for it. It’s a great little system.

Raid Manager isn’t going to compete with big corporate gacha titles. It won’t compete with big name ports and it might not even compete with indie darling games. All those types of games know their marketing, know their audience, and know a lot of the business surrounding game development. This game does have an initial price tag and it does have in game purchases, and yes I know that is a bad thing. The good thing for us is that this game is not designed to force you to make purchases. It’s actually tough to find the purchases in the game and you don’t need them. It actually serves as another reminder this isn’t a corporate money printer. That said though, Raid Manager is not as good as it could be for many of the above reasons, but the bottom line is that it is still a fun game despite itself.