MONOLISK (Free), if you haven’t read our previous articles on it, is a neat hybrid between a dungeon builder and a dungeon crawler. Players collect cards, gear a variety of adventurers, explore other players’ creations, and build dungeons of their own. It’s an interesting idea I haven’t seen implemented in quite this way before, and I rather like it. Unfortunately, a good idea does not always mean a good game. The progression system is flawed, and there are remarkably few tools to help players create the game’s lifeblood: Original content. While it looks promising, and I had high hopes going in, I left disappointed and hoping for major improvements.

Coming into the game for the first time, most players will likely choose to immediately go spelunking, pushing the urge to build a dungeon of their own off until later. That’s entirely understandable. I did it myself, in fact, and was sorely disappointed with what I found. The early adventures were small dungeons, dubiously designed. They were interesting to explore as a first foray into a new game, and borderline boring to play; although that’s not terribly surprising since most loot-based games aren’t particularly interesting early. The problem, though, is that MONOLISK takes quite a while to become interesting. Part of that is due to the player content itself, the other part is due to progression (which we’ll talk about later). Players creating dungeons is a wonderful idea, but its success is entirely dependent on whether or not players can make fun, enjoyable experiences consistently. MONOLISK is confident they can—so confident, in fact, that they are entirely reliant on player content for shards. Unfortunately, it isn’t paying off. Whether it’s lack of publicity for good creations, or simply an absence thereof, it is not easy to find interesting levels. 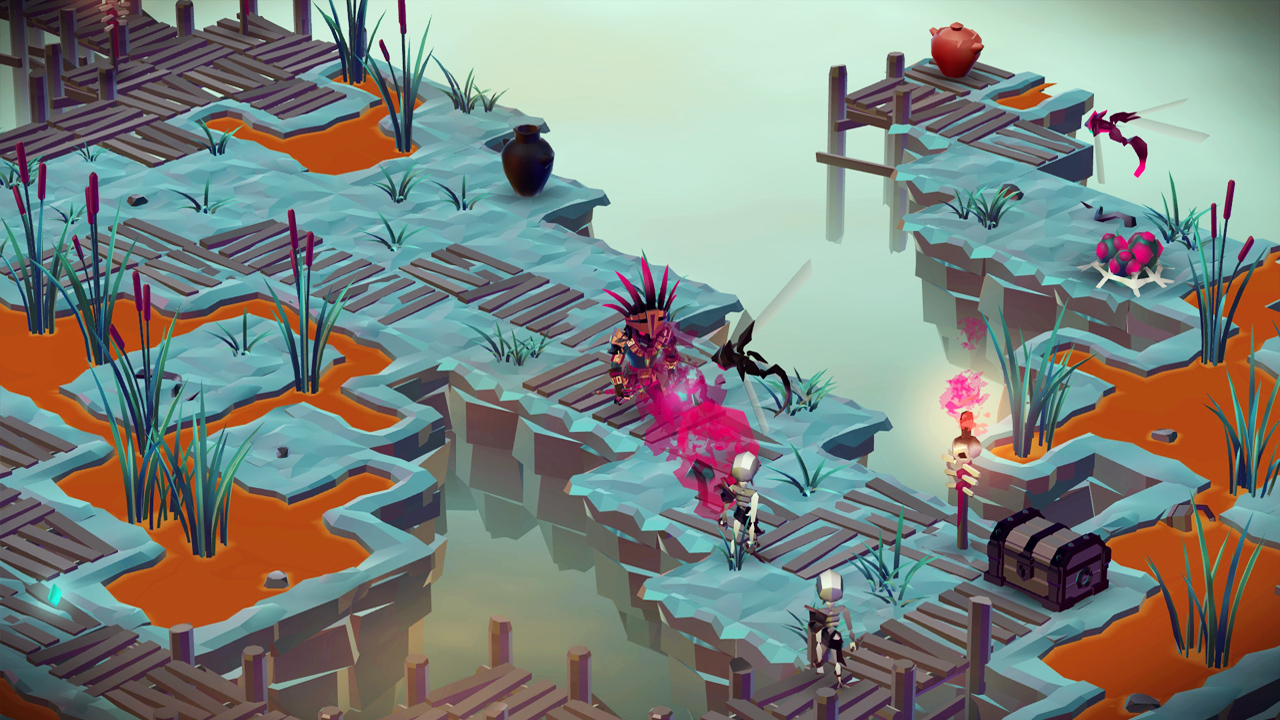 From the other side, it’s not easy to make that content either! Players who opt to try their hand at building their own shard (MONOLISK’s term for a dungeon) will find a remarkably limited toolkit. Most everything you would expect to have is there, but in very small quantities. Without a fair bit of experimentation, it’s all too likely that the end result of a not inconsiderable amount of time is a poorly thought out, overly long dungeon, nearly barren of hostile encounters. It’s not all the creator’s fault, though, since there aren’t any helpful guides or tutorials on how to go about making something interesting, something exciting to explore, and adequately populating that creation with monsters. This is somewhat mitigated in the future, though, as players get more monsters, and it becomes easier to patch over poor design with fighting.

You’re probably wondering at this point why it takes so long for the game to become interesting. Well, that’s a result of an unfortunate decision in regards to progression. Progress, both as a dungeon creator and an adventurer, is gained with card packs. What are card packs, you’re wondering? Exactly what they sound like, and what you’ve probably seen before in other games. Once you have acquired a certain amount of currency, or enough players have rated your dungeons, you can open a pack. Inside, you may find creatures to place in your dungeons, or skills and gear for your adventurers. 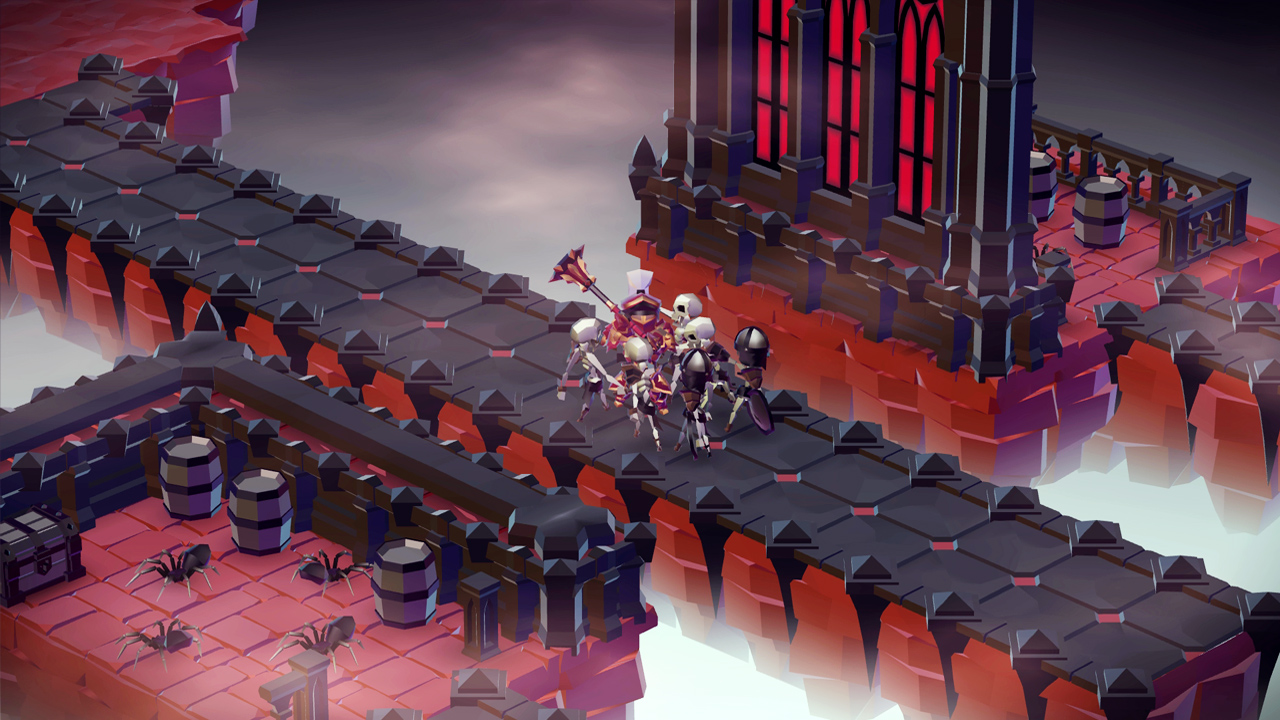 While this seems like a reasonable and unobtrusive way to monetise a game, and it isn’t necessarily a bad idea, it inadvertently disincentivizes dungeon exploration and hampers dungeon creation. See, hunting monsters & opening chests is great and all, but games like Diablo, Borderlands, or even Destiny aren’t appealing because of their amazing gameplay. No, they’re appealing because beating baddies up in the pursuit of bursts of colourful loot is satisfying. Continuing this analogy, pulling that weapon, skill, or high-value shard from a card pack has a similar dopamine rush, but it’s nowhere near as satisfying. It’s like grabbing a handful of candy from a mix bag, rather than smacking a piñata for all those delicious treats.

On the other side of the proverbial wall, dungeon builders don’t have the link between hitting the bad guy and getting awesome loot, but that doesn’t mean they aren’t also hindered by an economy based on card packs. Rather than affecting the fundamental feedback loop, as card packs do with adventuring, they affect something a little more blatant: The tools available to create shards. Opponents, shards types, and higher level shards can only be used after they are unlocked through card packs. At the start, players only have a meagre variety of enemies and tiny shards to develop. Sure, they function as something akin to a tutorial… but a proper tutorial or three would be better all around. Moreover, there’s no guarantee that enough of a single enemy type, or large enough shards to put them to use in a properly themed level, will make an appearance in any reasonable time frame.

As a last kicker, card packs are mixed and contain everything, not only things that haven’t been unlocked already. Maybe you’ve already unlocked all the equipment for one or two adventurers, or maybe you don’t even care about adventuring at all—too bad. All those unlocked items, all that gear you don’t care about in the slightest, is all in there competing with potentially important drops. But hey! At least you can turn those useless cards into dust, right? Dust in MONOLISK is very similar to dust in Hearthstone, with a notable difference: There are two kinds; one for monsters, and one for adventuring equipment. So all those monster cards that keep piling up can only be turned into other monster cards, and all those crappy wands can only be turned into other skills or items. Altogether, progression is slow, and only becomes slower.

Despite its flaws, MONOLISK has potential. It is, as far as I’ve seen, unique, and a great deal of effort has gone into making it impressive. Unfortunately, since progression and player content, the areas it should excel in most, are where it is weakest, that effort feels… insufficient. Where there should be tutorials introducing prospective shard-makers to the tools and how to use them, there is nothing; not even an encouraging, “Good luck figuring it out!" Where there should be an introductory series of shards followed by an interesting and diverse multitude of well-built creations, there are instead abandoned first tries and a morass of content designed to quickly climb meaningless leaderboards. While I wanted to like MONOLISK, and while I am still interested in the idea and how it will be developed, I am not sure I am interested enough to stick around.