Word Laces is not a typical game, and in this case that’s not exactly a good thing. This word-puzzle game can range from fun to downright bothersome as you try to mix and match a variety of different letters or combinations of letters to spell specific words based on the picture you see on your screen. The game will then give you a series of letters and combinations of letters (Ac, On, etc) in two separate columns in which you are meant to combine into the words on your screen and do so in a zig-zag fashion, pun intended.

For example, my current level includes a picture split into 4 parts. One part has a hammer hitting a nail. Another part has an intense-looking man. The third and fourth parts contain a dog barking and an injured thumb, respectively. The words then might be Hammer, Concentration, Distraction, and Injury to show each different action and in this particular one, tell a small story. The majority of puzzles however are not stories and instead require you to look at the picture, the letters you have available, and guess to some extent what word you might be able to form. If you complete the puzzle without using any hints, you’ll earn 5 stars. Each hint used however will reduce the amount of stars you obtain. 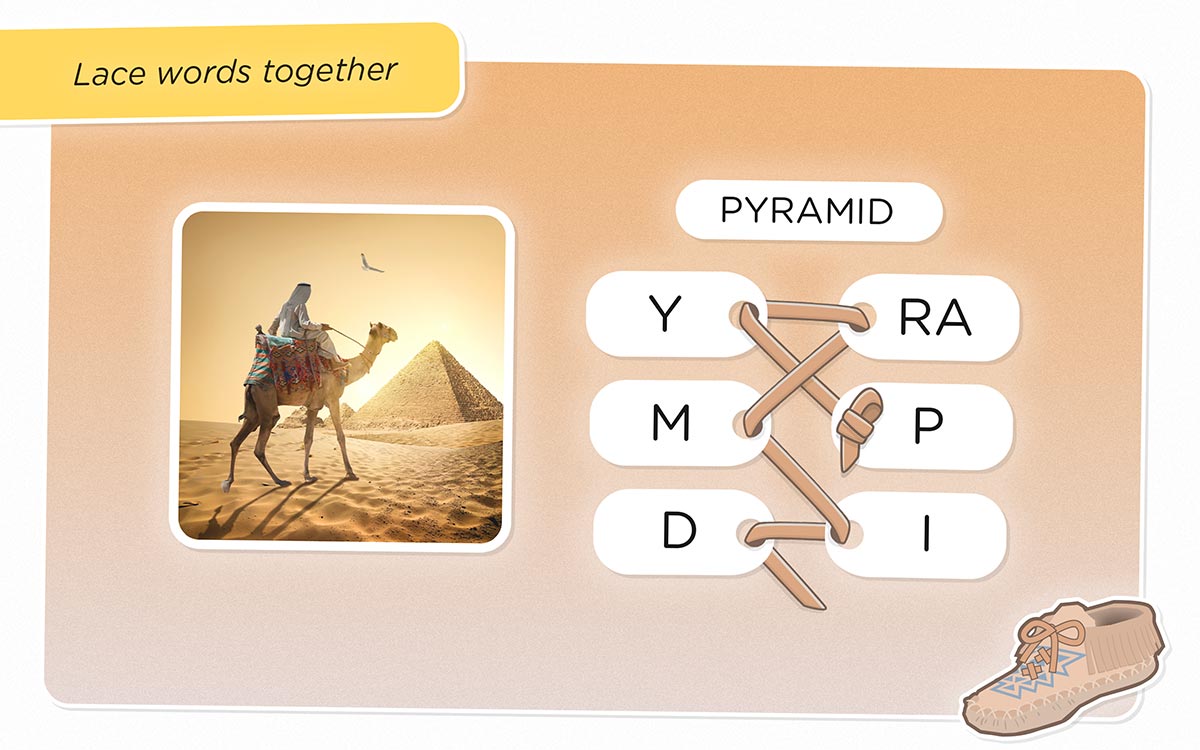 I found this style of gameplay unique to other word games at least but at the same time it becomes very monotonous. I’ve currently made it past level 50 and see and expect no changes in the gameplay. There are no other types of word puzzles nor are there even 3 or 4 columns to make it harder or at least different. It’s a different picture and set of letters and words, sure, but it’s still the same thing over and over again.

There is a sense of progression at least, but not a very enticing one. Your goal is to, I guess, collect all the shoes you can. This can be done by earning a specific amount of stars which will automatically unlock a new set of shoes. What do those shoes do, you ask? They send you off to the moon in a magical pixie volcano to destroy the King Shoemaker!!!… I kid. They simply earn you a new background and set of laces (connectors) between the letters. These shoes and laces can be anything from a set of badass biker boots to an ice skate, sneaker, or even what looks to be a ninja shoe. I’ve only unlocked five, myself, and don’t feel any strong attachment to continue unlocking more.

Another feature in the game is a Daily Puzzle, which is exactly what it sounds like. You’ll get a daily image and be able to solve it just like all the rest. It’s no different from the main part of the game and only serves as a way to keep earning stars in case you somehow grind out all 1000 puzzles in this game.

Word Laces does good things. The difficulty is perfect, the images are all high quality, there are no bugs that I’ve seen, and it does entertain at first. Unfortunately, the grind in the game is unreal and the lack of variety makes it less fun the more you play it. The game has its strong points and would be great for helping children learn spelling and vocabulary, but for the general public it’s just not good enough.

NOTE: Word Laces is available exclusively as part of Apple Arcade, a premium gaming subscription service from Apple. Without being a subscriber to Apple Arcade you cannot download and play this game. Apple Arcade is $4.99 per month and does come with a free one month trial, you can learn more about it on Apple’s official website or by visiting our dedicated Apple Arcade forum.