Ever since my trip to last year’s Pax Unplugged, I feel like a veil has been lifted from my eyes. I thought I knew what all the new board games were and had my finger on the pulse of the boardgaming world. Well, that wasn’t really the case, and with how fast new games spring up, it’s basically impossible to keep up with all of them. I saw this one hit the App Store though and I knew I had to get it. Raiders of the North Sea($9.99) is a worker placement game for up to 4 players that puts you in the role of a viking intent on setting sail in the pursuit of plunder and glory. You will need to assemble supplies and a crew in order to prepare your attack. Each turn you get to either set sail to raid or take two options in your town that help you prep your ship. As you gather shipmates to your cause and amass supplies, you can start attacking harbor locations. With enough crew strength and supplies, you can push further inland to more heavily fortified locations for greater rewards. This is a game built around choice and leaves little to chance. There is a little bit of card draw randomness but strategy is going to win out over luck the vast majority of the time when you play Raiders of the North Sea. 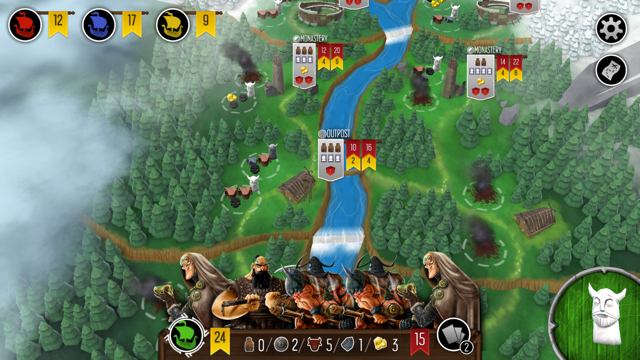 Worker placement board games are a staple of most serious table top diets. From the Dungeons and Dragons rooted Lords of Waterdeep to the nuclear proliferation based Manhattan Project, you can find a theme of any stripe to toss meeples at. What Raiders of the North Sea does differently isn’t just swap in a theme palette and call it a day. It looks at the inner workings of the genre and decides that the status quo has got to go. Instead of slowly filling a board covered in a myriad of options, in this game you only have a handful of options, and no matter what you can almost always get to the job you need to do.

The problem comes with order of operations. Mechanically speaking, you take your turn first by placing the meeple you have, and then picking up one that was already on the board. You take the actions of both of those spots on the board, first the one then the other. So the worst thing an opponent can do to you is prevent you from doing two things in the order you want to do them, or sometimes preventing two actions from being done in the same turn. This vastly reduces the board control aspect other players can have on your gameplay and opens up the entire game in a way that the majority of worker placement games only wished they had. Doing a raid is a bit different, but you still end up putting a meeple down and then picking up a different one. Overall, you will never have a “dead" turn playing Raiders of the North Sea, only a less optimal or more optimal turn.

The only negative thing I can really say about the way the game plays is that you and your opponents will all basically follow the same biorythym in game. Very often you are gathering, recruiting, and raiding the same time everyone else is. On one hand it’s not necessarily a bad thing to be able to gauge how quickly you are progressing vs the other players, but there is not a whole lot of asymmetry in this one. Even with the armory and valkyrie tracks that reward you for armor gained and sacrifices made you won’t get into many situations where a come-from-behind victory surprises anyone.

Now if all I had to say about this game is “yep, it’s a good game" you could just go to one of the many wonderful boardgaming YouTube channels and get a whole word smorgasbord about the quality of the game. What you wont get from a boardgame review is any words about the quality of the app. Sitting at just under 365 megs on my phone, the game boasts online and local play along with a solid tutorial and easy to press buttons and icons. While it would be a nice thing to see more work done to reduce crashes the game has when starting up and maybe a color blind mode, the game has a solid foundation. I have seen no stability issues once past the initial load in, and ultimately the app does its primary job – to present the game in a clean manner and organize the inner workings of the game mechanics.

At the moment neither the Hall of Heroes nor the Rocks of Ruin expansions are available as add ons, but at $9.99 Raiders of the North Sea offers a really solid gameplay experience in a well put together package. I would say the primary audience for this app, like most board game apps, is the travelling board gamer who isnt interested in lugging their entire collection along with them. We need to see more board game apps like this one. Not just that prime target is satisfied, but also a wider array of folks with features like online play and a simple and easy to use interface. If you like board games that emphasize strategy over randomness or board games that feature vikings, or just worker placement games, this is a great one to pick up.