After back-to-back Dragalia Lost revival events, the Flames of Reflection event has arrived to offer something to old and new players alike. Whether you’re looking for a Path To Mastery Master difficulty strategy or want to know how to farm rewards as fast as possible, this Flames of Reflection guide should help you out. And with the upgrades available here, you’ll be able to take on more of the Mercurial Gauntlet!

Months of speculation and wishful thinking have culminated in an origin story finally adding the game’s blacksmith sisters as playable characters. Was it planned from the beginning, or is this more proof that the Dragalia Lost team listens deeply to the cries of their playerbase? We don’t know. But what we do know is that it’s a facility event – and that’s good for everyone!

The Dragalia Lost Flames of Reflection event kicked off on July 11, 2019, and runs up until July 21/22, 2019 (depending on your timezone). The conclusion to the story will play out after this date, and rewards will remain redeemable until the following week. 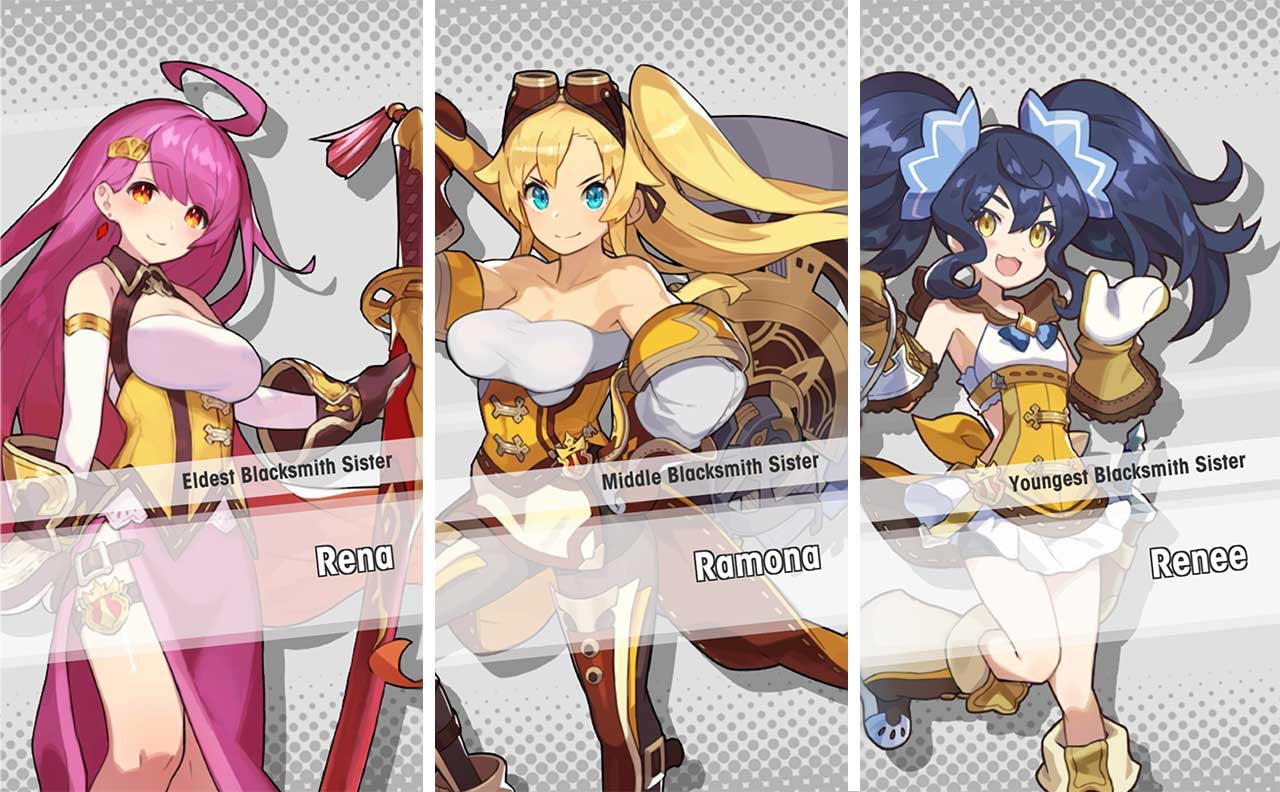 The Dragalia Lost Flames of Reflection event brings a summon banner of the same name. This banner includes three new adventurers; Ramona, Rena, and Renee, and a new dragon – Arctos.

Other Flame-attuned summons (like Prometheus) will be rate up during the event. Check the appearance rates tab for precise information.

The Flames of Reflection event story feels quite a bit longer than most others. Being a prequel, it has quite a bit of ground to cover. Even still, it isn’t too detailed and you won’t be missing out on much by skipping over the text if you’re hungry to fight its beasts, farm the facility upgrades, and get that loot.

The story details how Eugen and the gang traveled to meet Ranzal’s old blacksmithing buddy. A master of his craft. Upon reaching the town and walking into his old shop, they meet the old man’s three young daughters. After a few misunderstandings, we learn the artisan had passed away from a sudden illness – but not before passing on his teachings to his offspring.

Now keeping the old forge alive in his stead, Eugen and the gang agree to take the girls in as the Halidom’s exclusive armorers after bearing witness to their impressive skills. The three girls then enter a blacksmithing competition and are disheartened to see their rival topping their efforts.

Arctos, the bear mascot that had represented the old man’s business outside his workshop, then reveals itself as a dragon. Displeased to see his old friend’s children doubting themselves, Arctos helps the girls identify their weaknesses in the hopes of allowing them to better hone their craft in the process.

Completing the Flames of Reflection event rewards players with plenty of rare and valuable items. Simply by playing the event, you’ll earn “Mettle Rewards" which instantly reward things like Twinkling Sands, Summon Vouchers, and Champion’s Testaments as you earn more. This can be sped up by fulfilling certain conditions in applicable quests (like limiting the damage you take), and by equipping the new wyrmprints introduced.

Similarly, token items earned through each event quest can be spent on things like weapon tablets, character upgrade materials, and valuable items like Steel Ingots, a Damascus Crystal, and additional Champion’s Testaments.
It’s a good idea to pick up the wyrmprints on offer here first. They dramatically increase the number of tokens and mettle you earn with each quest, speeding the whole process up and making for less stamina waste. The cost increases with each copy, but it’s better than spending precious Eldwater or wasting Gold/Silver Keys.

Like past events, the chosen element will enjoy double upgrade drops from things like Dragon Trials and Elemental Ruins at specific times. It’s a good time to upgrade your Flame-attuned adventurers.

Being a facility event, the most important part is actually upgrading the thing. As with any facility event, the facility drastically increases damage output against the event-specific enemies, while offering the same static Strenght/HP bonus to the applicable element like any other altar – even after the event ends. It’s a cheap and easy way to get what is essentially a maxed-out altar. And one you won’t be able to upgrade once the event ends.

It’s recommended that you focus your efforts on upgrading the facility first and foremost. Grind the Arctos’s Trial mission hard once you have the relevant wyrmprints and stockpile the Motivational Logs so you can quickly set your smithwyrms to get started on another upgrade as they complete. Most

This is the first boss battle content you’ll come across in the event. It’s available in 3000, 5000, and 7000 Might doses. Each difficulty setting unlocks as the facility reaches specific upgrade levels. Which makes sense given it’s the same quest you’ll want to farm to quickly gather the materials needed for each upgrade.

The fight itself is simple enough. It’s a single wave battle against an apron-clad ogre. Adds will spawn periodically, with the smaller ogres being a bit more of a nuisance. They’re bulkier and can really hinder your mobility. Dispatch everything a quick as possible, but try not to kill the boss until you’ve taken out the menace which spawns later on. You’ll get more rewards this way.

The Path To Mastery – Expert Strategy

This is where you’ll want to focus your attention once you’ve gathered enough Motivational Logs to keep the facility upgrades going. The Path to Mastery – Expert is a gauntlet-style battle consisting of five waves of enemies, with the fifth featuring the boss, too.

Spawns are scripted, meaning you can plan ahead and position yourself to sweep through waves efficiently. Axes are typically very useful here thanks to their wide attacks and the unique pull-in effect from their force strikes. Bringing along a helper like Annalie can have a similar effect – even without the element bonus.

Vanessa and the newly released Ramona are wise picks. Not just because of their affinity for area attacks, but because of their Sleep immunity – something typical meta Flame adventurers like Marth and Mikoto will wish they had in their toolkit here. Verica is a competent healer, but Hildegarde (or her Valentine’s version) will work just as well.

The Path To Mastery – Master Strategy

You’ll want to have your facility at level 20 at least before giving this a real shot. If you’re able to get to the final stage consistently, spending stamina here might offer better rewards in the long-term.

The Path to Master – Master strategy remains more or less the same – but you’ll need to work harder to pull it off. Completing this within the time limit means ensuring everyone reaches the final stage – an early death warrants a retry. Force Strikes become important as the only way to chop the boss’ health down in decent time to break it as fast and as often as possible, making swords, axes, and wands good options.

Like before, Ramona/Vanessa are solid pick here, with Karl and/or Gala Sarisse helping, too. Those without Sleep resistance like Mikoto and Marth should be controlled to avoid falling victim to deadly combos while incapacitated. If you have a couple particularly strong units, bringing two healers can really help. The defense up team buff from ax-wielders can make a huge difference regardless.

The key here is to dispatch each wave as quickly as possible. You want as much time on the boss as you can get. Again, axes and Annalie-style helper skills work well. Just remember the spawn patterns and focus on taking out the healers to prevent any unnecessary revivals.

Once you reach the boss stage, it can be worth specifically ignoring the second or third set of adds. They soak up too much damage and can be dodged fairly easily. Stay on the offensive, but don’t get careless. Use skils and dragons to avoid large attacks, or turn to something like Phoenix for a handy regen (and to keep your healer alive).