Considering his face turn in recent American movies, it’s easy to forget that Godzilla began his career as a Tokyo-destroying parable about the dangers of atomic weapons. If you need a reminder in somewhat less solemn fashion, you’ll find it in Godzilla Defense Force (Free), Nexon’s ode to 65 years (yes, that’s right) of glorious kaiju action. It’s one part base defense, one part idle tapper and one part card game, but it all equals a love letter to Godzilla and his friends and foes.

The basic concept is pretty simple. Thanks to some extraterrestrial treachery, monsters from throughout the vast Godzilla film library have been unleashed on the cities of Earth, including many who have come around to our side after a while. Your job is to take a stand against them, starting in Tokyo, naturally. While you earn coins to build up your forces by taking out smaller threats, you’ll need all the upgrades you can muster every 10th level, when a kaiju arrives. Happily, you can also play cards to turn the tide at opportune times, even summoning the Big G himself to lend a hand. Because it wouldn’t be much fun if you couldn’t have some kaiju on your side, and besides, the track record of human armies against giant monsters is pretty poor.

Godzilla Defense Force is simple enough for anyone to dive into but has just enough intricacies to make it not quite as basic as it first appears. Let’s stomp through some tips and tricks and you’ll see what we’re talking about.

Kaiju Defense 101: Calling Out the Troops

As the person in charge of defending cities against giant monster attacks, your primary duty is to build up the armaments available to the human forces. You start with just one building, the Command Center, that will spit out foot soldiers at a regular interval, but you can produce even more by tapping on the screen and sending a stream of them out faster, probably to their deaths. Now who’s the real monster, eh?

Jokes aside, your troops will earn coins as they fight, which in turn can be invested back into the Command Center to increase the DPS of your soldiers. When you have enough coins for an upgrade, you’ll see an arrow appear by the ‘G’ icon in the bottom left-corner of the screen, and you can tap on that and then by the corresponding button for your Command Center to bump up the DPS. As you advance, you’ll unlock a Barracks for troops with bazookas, a Tank Factory to get some armor on your side, turrets, air units, and more.

All of your forces fight on their own, but as noted, you can speed up how many infantry join the fray by tapping, and you’ll want to actively tap as often as possible to be able to clear stages faster. Assuming you constantly upgrade your armies, you should be able to cruise through the waves of smaller monsters, meaning your only real problem will be every 10th level when the kaiju come a-calling.

Kaiju Defense 201: How to Fight Off Giant Monsters

Yeah, we all love giant monsters, but that feeling fades a little when you’re up against them with nothing but guns and tanks. Godzilla Defense Force also makes kaiju battles tougher because you have a limited time to defeat them, usually only 30 seconds.

All the advice in the previous section still applies, but now you’ve got the clock to worry about and you need to keep an eye on your buildings as well. If you see an exclamation point appear over one of them, that’s your cue to tap there quickly until it goes away. Otherwise, your building will be destroyed, taking it out of action for precious seconds you really can’t afford to waste.

Alas, you’re going to need some extra help to defeat the kaiju in most cases. Yes, even wimpy Kumonga. Here are the extra things you need to know. 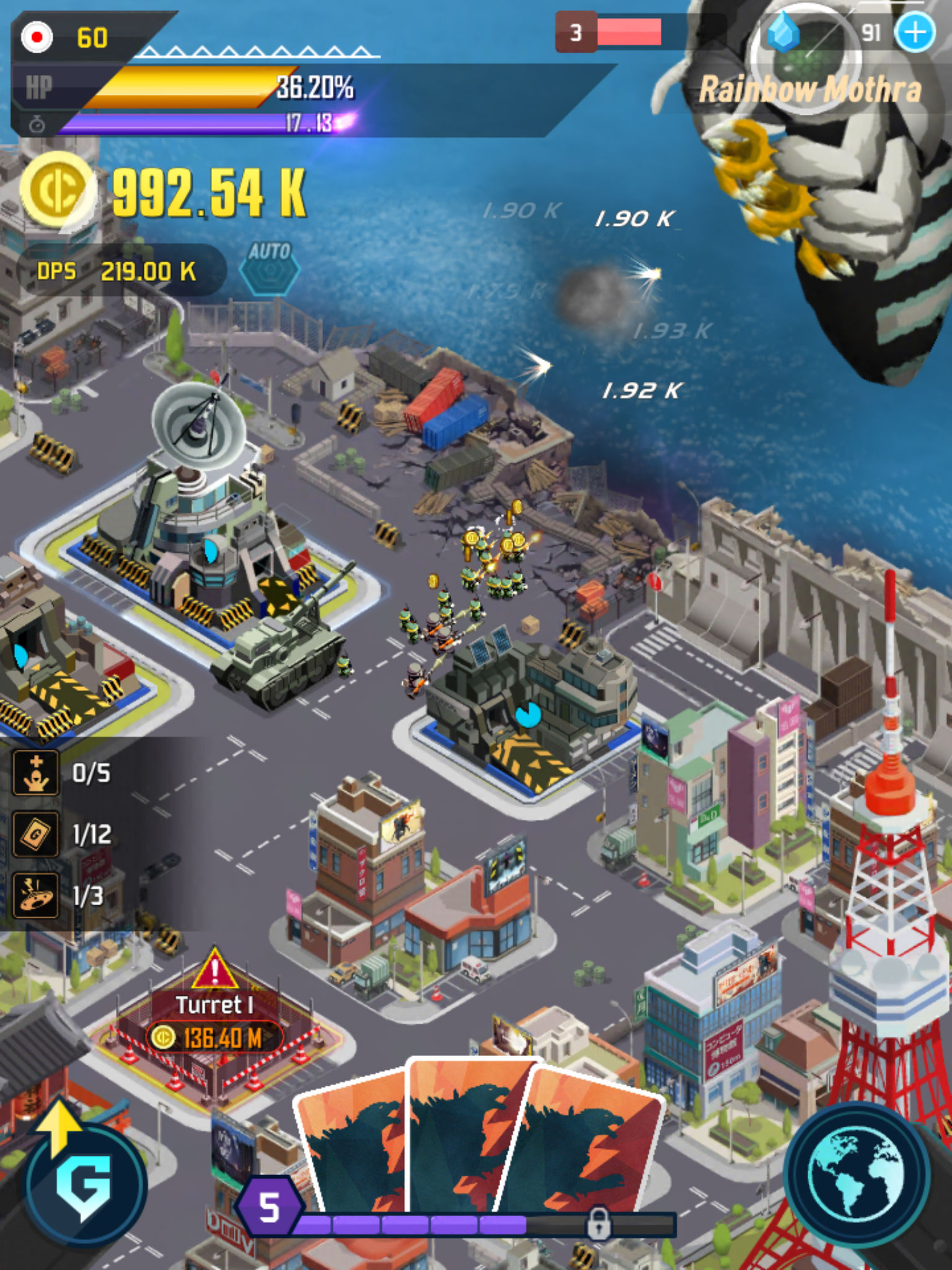 Every kaiju has a weak point that will be exposed sometime during a battle, Tap on it as soon as you see it pop up and you’ll deal some nice extra damage. But act quickly, because it won’t stick around for long. 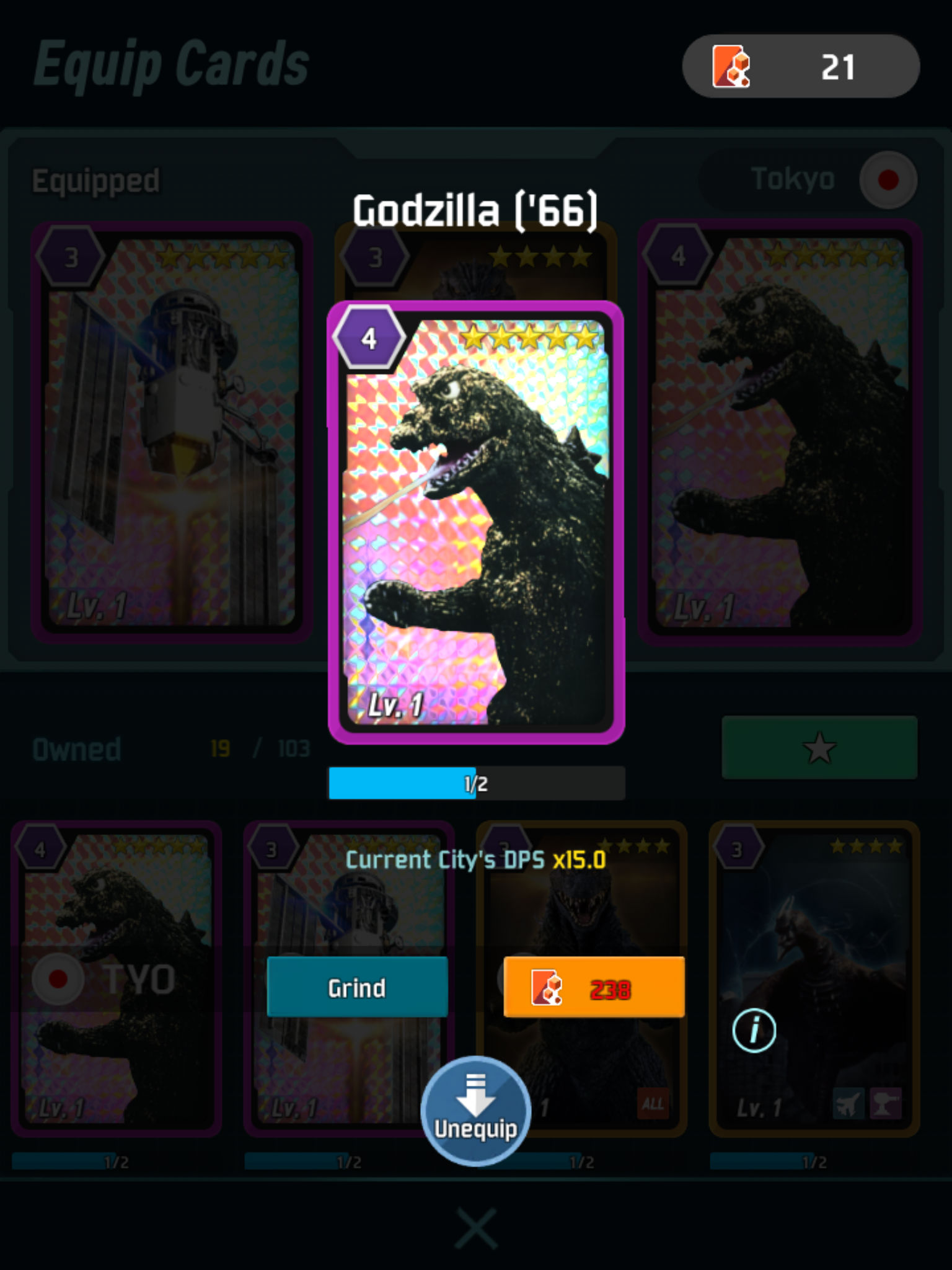 You wouldn’t think cards would do much good against monsters that are hundreds of feet tall, but you’d be surprised. Godzilla Defense Force offers a variety of cards you can take into a kaiju battle, powered by G-Cells — a purple meter that refills over time that you’ll see at the very bottom of the game screen. Each card has a cost, and if you have enough G-Cells to play one, you can do so by simply tapping on the card icons, then dragging the card onto the screen.

Cards can range from fancier than normal Earth weapons to kaiju themselves. Some of them even summon a monster to come and deal out some pain on your behalf, which is always a welcome sight. You can have up to three cards in your “deck" at any given time.

Bonus tip 1: Because of the limited time you have for any kaiju battle, you’re only going to be able to play a card one time, so make it count.

Bonus tip 2: You’ll notice quickly that your G-Cells refill pretty slowly. For that reason, it’s a good idea to have your meter fully charged before starting a kaiju battle, because otherwise you might not ever have it full during a fight.

Bonus tip 3: Make sure you know what each card you’re using does,  and try to have at least one direct damage card in your deck. The Orbital Cannon and Godzilla [’66] are both good examples you should be able to acquire fairly early on. 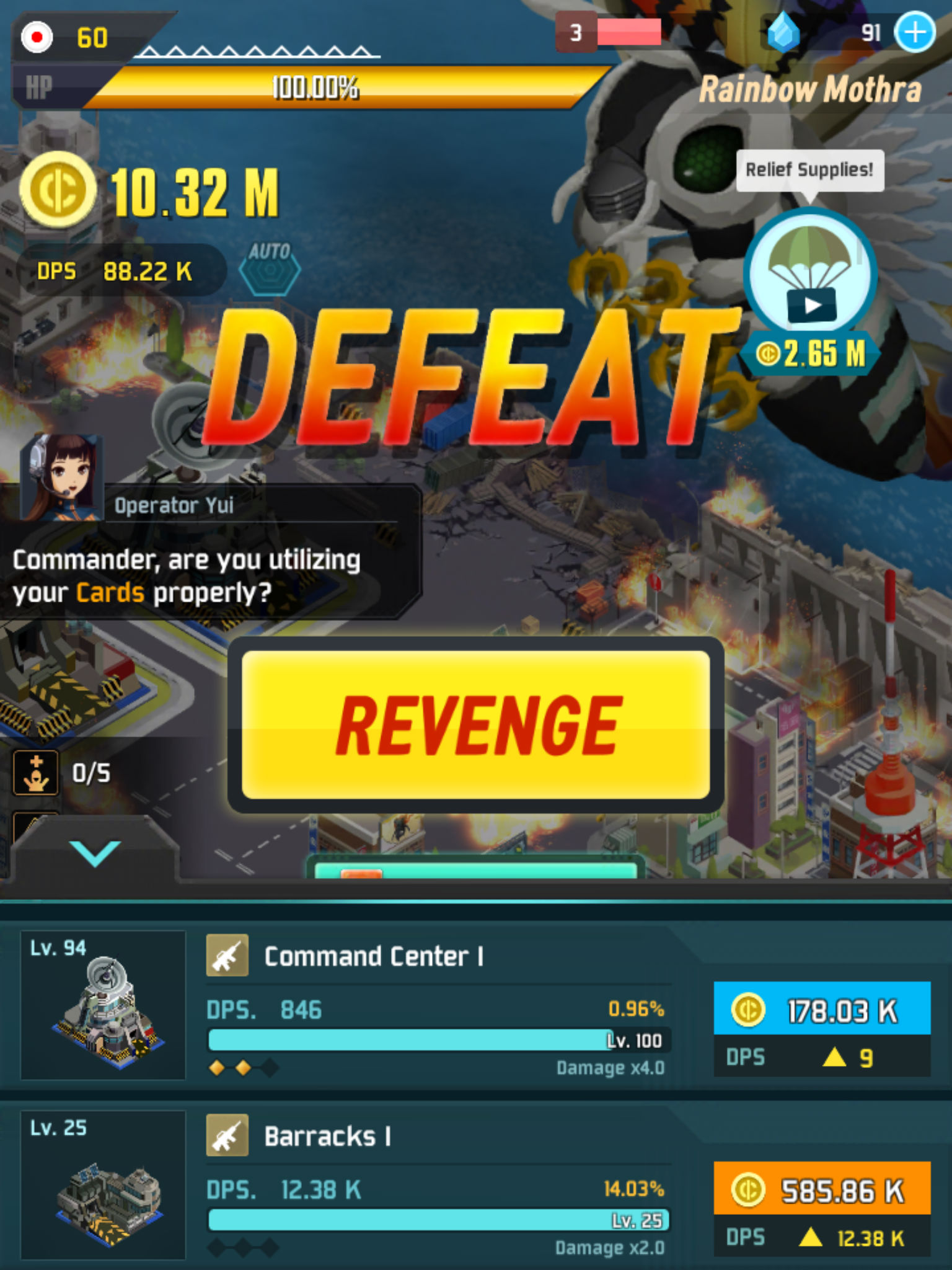 No matter how savvy you are or how quickly you can tap, you’re going to run into some times when you simply can’t take down a kaiju in the allotted time. It happens. The question is how you pick yourself up  and get ready for a rematch.

Godzilla Defense Force gives you two different ways to be better for round 2, and neither involves spending money, though they do require you to watch a short ad each time.

This is a bonus amount of coins you’ll find right next to the giant ‘DEFEAT’ on the screen that is crushing your self-esteem. Tap on it, watch an ad, and then spend the coins you get on buffing up your troops.

Right under the ‘REVENGE’ button, you’ll see a button for card selection and then another one that says ‘BOOST x1.’ Tapping on that will give you the option to watch an ad to increase your boost level. You can do it only once per defeat, but if you lose three times in a row, you’ll be able to reach Boost level 3, which increases all the damage you do by 25% and basically turns things into easy mode. Seriously, if you take nothing else away from this guide, remember that getting your rear end handed to you three straight times isn’t the worst thing ever, because as long as you Boost each time, you’ll almost certainly win on your fourth try.

Bonus tip: When Godzilla is ready to appear, you’ll be stuck on the same stage fighting smaller monsters until you decide to challenge him. For that reason, you can avoid defeat in the first place simply by battling for a while and earning enough coins to really power up your forces.

How to Get More Kaiju Cards For Free

This is likely the most interesting part of the game for many people, because let’s face it, summoning Godzilla or another kaiju is just downright satisfying. The good news on that front is that you get one copy of a kaiju card the first time you defeat it in the game. That’s only on the first encounter, however. Subsequent battles will earn you Card Powder instead, which you can use to power up the cards you already own.

Are there more ways to get free kaiju cards? But of course … 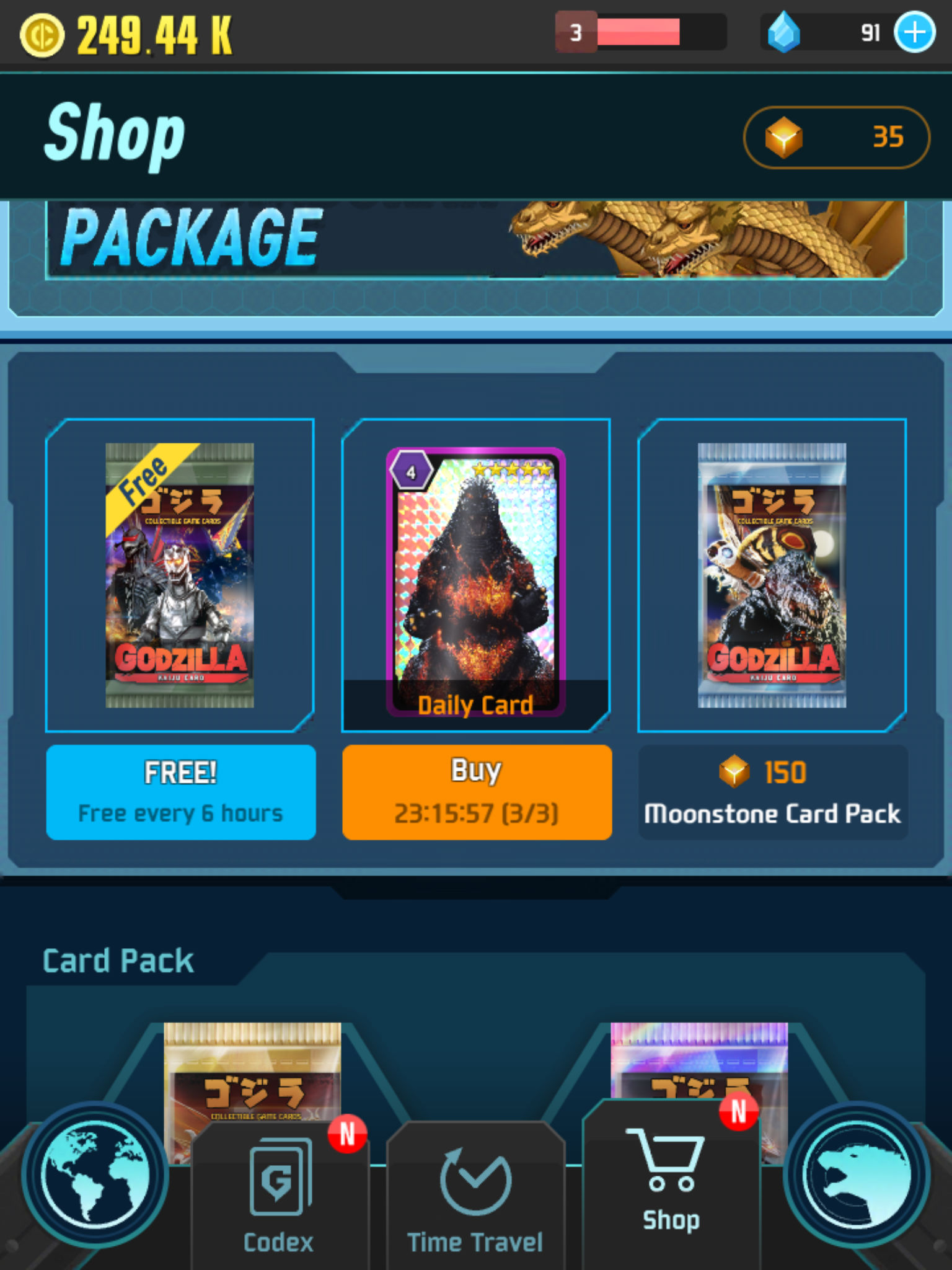 Every six hours, you’ll find a free pack of two cards with rarities between 1 and 3 stars. Definitely make a habit of picking up your freebies. 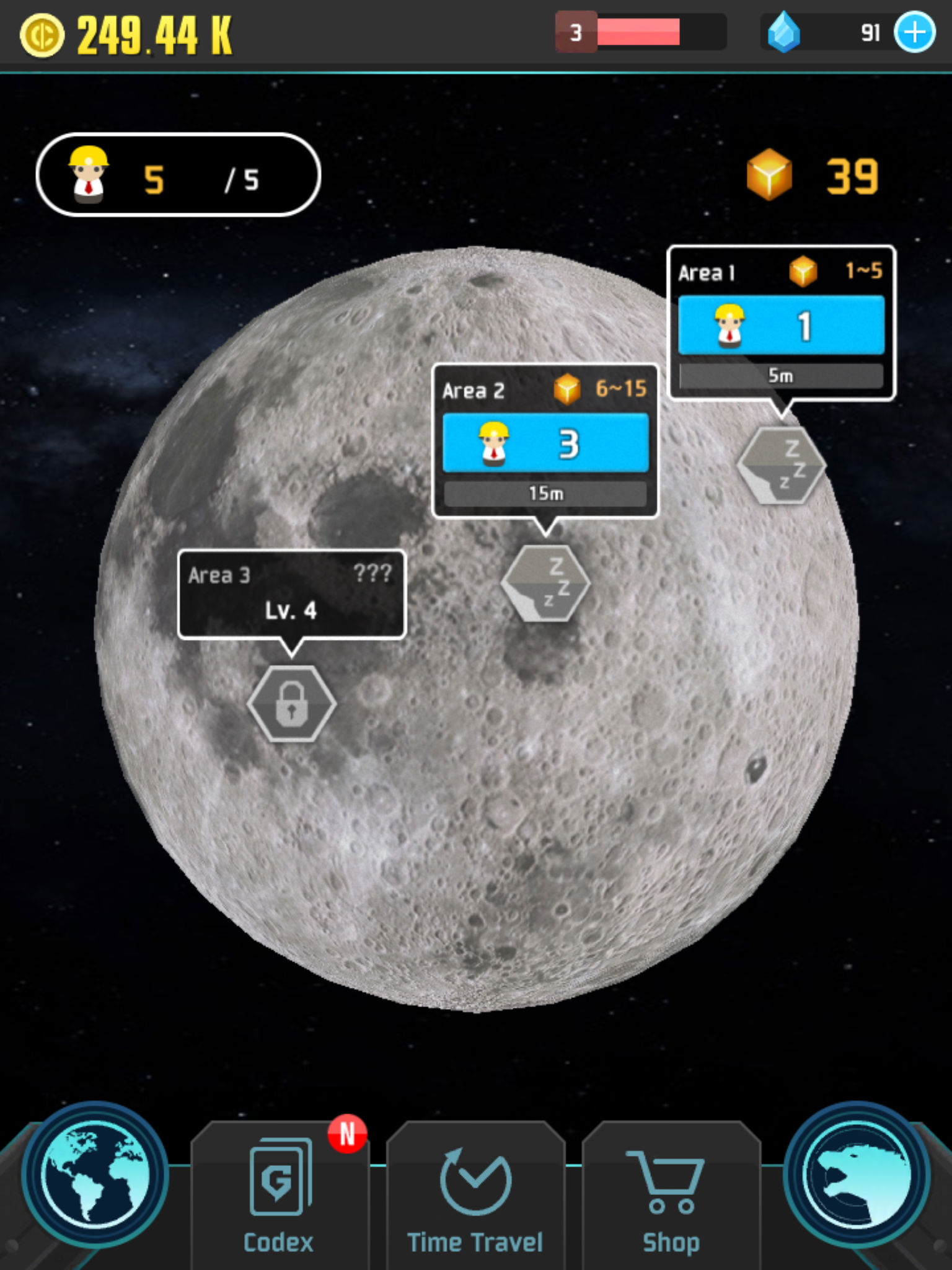 Every now and then, you’ll see a civilian cry out for help, which is only natural considering, you know, the whole giant monster attack thing. If you save them, the governments of the world will reward them by sending them to work on colonies on the moon. Maybe being eaten would have been better … Anyway, you can assign people you’ve rescued to mine Moonstones for you, which they will find automatically after a certain amount of time has passed. You can then spend 150 Moonstones in the shop for a card pack with a card of 1 to 4-star rarity.

Can you buy cards too? Absolutely. The premium currency in Godzilla Defense Force is called X-nium (you’ll kind of, sort of understand why if you pay attention to the in-game dialogue), and you’ll earn it mostly by completing achievements — which you can find by tapping on the trophy icon on the game’s menu screen. A Normal Card Pack will get you 3 random 1 to 5-star cards for 100 X-nium, while a Rare Card Pack will yield 5 random 2 to 5-star cards. We haven’t saved up enough yet, but we’re guessing saving for the Rare pack is the way to go.

Well, you’ve read this far, and we want to make it worth your while with some additional tidbits. Consider it something to reward you for not just wading off into kaiju action right off the bat.

Tapping can be tedious after a while, and possibly even lead to carpal tunnel syndrome or something (note: no one on the Touch Arcade staff is a doctor, so this could be completely false). In the shop, you can earn limited duration of Auto-Tap, which will simulate tapping on the screen 8 times a second without any wear and tear on your fingers. Watch an ad to get a little, or spend X-nium to get a bunch more.

Because colonizing the moon to possibly escape kaiju attacks wasn’t wacky enough, the Earth’s governments have also apparently discovered how to travel back in time. Nifty. For the purposes of this game, it’s a way to honor the idle tapper parts of its DNA. You can choose to time travel every time your HQ reaches level 5 or above; doing so will reset all of your bases to the way they started and you’ll have to beat the same levels all over again. However, you keep your cards, and you’ll also earn a special currency that you can spend to buy powerful artifacts, each of which has buffs that will make your return battles easier the next time around.

That reference to an oldie but goodie by The Clipse is relevant here because if you get cards you don’t particularly want, you can grind them into Card Powder you can use to level up the ones you use often. Just head to the card select screen and look for the ‘Grind’ button, then be sure you really want to do it.