As a child, proximity is key to making friends. So when my family moved to a new home when I was five, the first friend I made was the outgoing girl who lived two doors down. Even then, I recognized that she was my opposite, loud and unashamed versus my quiet and somewhat meek. But we clicked, and remained friends for decades, even after I moved away seven years later. I see so much of my past in The Gardens Between ($4.99), a tale of two friends reminiscing on their last day as neighbors.

The story follows Arina and Frendt, neighboring children who find a deep friendship in their time in each other’s homes – and in the gardens in between. After years of growth together, Frendt is moving away, and The Gardens Between is about their intertwined past. It is clear that Arina is headstrong and Frendt is a cautious thinker. Arina boldly moves ahead for the most part, carrying the lantern. Frendt is a bit more exploratory, and uses his skills to find important items or change what timeline is being affected. They’re a perfect match.

Arina and Frendt’s story is told through various islands, each representing a memory of their time together. Each island isolates the children from the real world and places them in their dreams and fantasies. Each island is themed to a specific event or memory. The islands contain giant versions of childhood items: a garden hose, a kiddie pool, playing cards, etc. And each grouping of islands/constellations tells part of the story. There are no text or voiceovers, but the narrative remains clear.

The gameplay is based on going forwards and backwards in time. Swipe left to go back in time, swipe right to move time forward, and tap to execute an action. Those are the only motions needed to play the entire game. It’s genius in its simplicity. It’s so intuitive to swipe to move time than you would think the title was originally designed for mobile, rather than being ported from other platforms. It also works well in a mobile space as it is easy to play in small bursts rather than one long sitting.

Cloud saving makes it easy to play on multiple devices. I cannot even begin to list the number of titles this could benefit, and it is a very welcome feature. I like to mostly play on my iPad so I can soak in the graphics, but I love having it synced up on my phone for when I’m away and struck with genius to complete a level. You can play in portrait or landscape mode. The title was originally for PC and consoles, so these versions play landscape. I’m a rebel, plus the islands move upward, so I prefer to play in portrait. Like the cloud saving, it’s a small detail that can mean a lot.

The purpose is also clear: get a ball of light into the stone statue at the top of each island. It seems easy at first, but then more elements are added; black holes and bells change the game completely. I mentioned a bell earlier – ringing the bell freezes the friends and allows you to move certain objects through time and space rather than the children. It’s a fascinating mechanic, and the swap adds a good amount of depth to the gameplay. 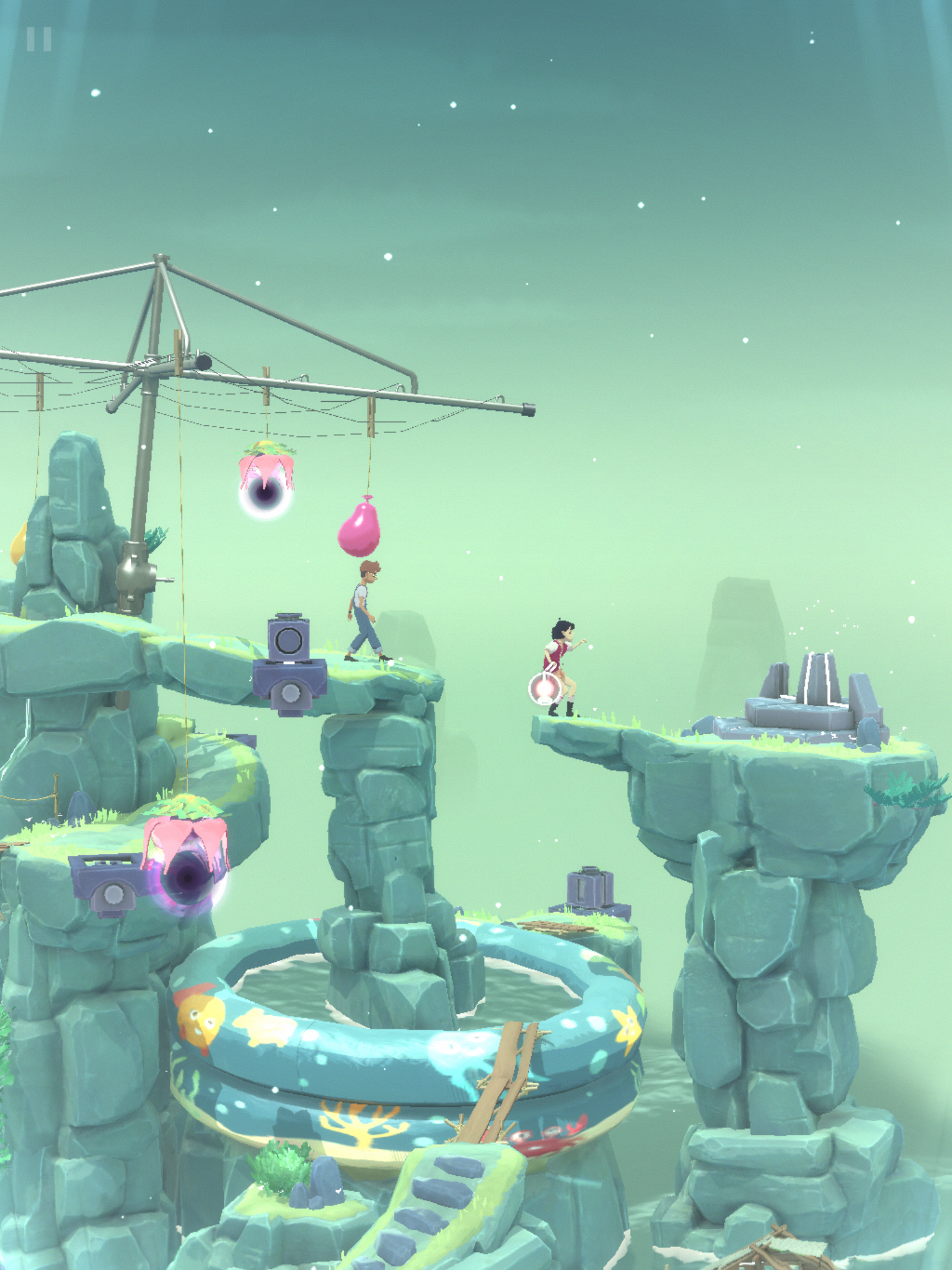 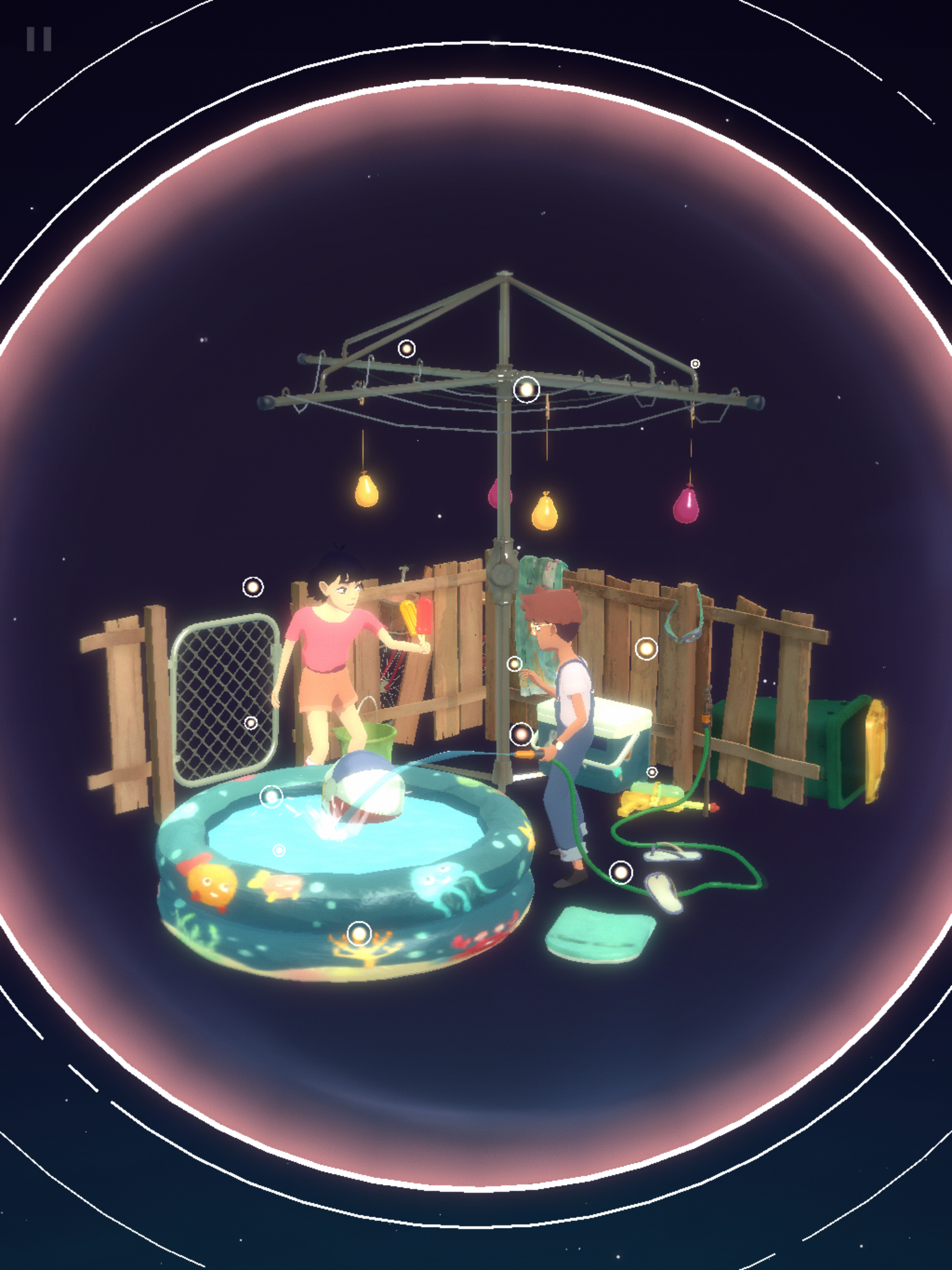 The incredible ambient soundtrack deserves a shoutout, as it fades into the background to help concentration while also being quite clever. Wear headphones (or crank that volume, but it’s not the same in this case) to really immerse yourself in the world. The ambient sound effects are perfectly suited for each environment. For example, in the level outfitted with a giant TV at the top of the island, you’ll hear background noise from the speakers the closer you get.

The game is quite short, even as short games go. It shouldn’t take more than a couple of hours and patience to complete The Gardens Between, but that’s not a bad thing. The story is told eloquently, without pointless bulk or filler.

I have two gripes with The Gardens Between. One, the dark bars at the top and bottom of the screen, indicating a cut scene. It seems unnecessary to do for only a few seconds at a time, maximum, and somewhat removes me from the narrative. Two, if you’re stuck, you’re stuck with trial and error – you won’t find any hints here.

The end of the game may be the end of being neighbors, but it doesn’t mean the end of being friends. Arina and Frendt evolve over time together, from kiddie pools to exploring drains. My friends and I preferred to explore the local cemetery, which seems bleak in retrospect. Anyway, they will keep evolving as they are apart, and in my mind they remain friends through the trials of tribulations of growing up and into adulthood.