Imagine a world where doctors have fled, and psychics are the new doctors. It sounds downright crazy, doesn’t it? In fact, most of Astrologaster ($4.99) follows the pattern of seeming downright impossible, but the impossible is actually true. I know this is a bit confusing, so this review will begin a bit differently than normal, with a brief history lesson. What I’m about to write will seem outlandish and untrue, but it is historically accurate – or so the developer promises.

In England during the late 16th century, the population was severely affected by the bubonic plague. Doctors fled to avoid it, but one wannabe named Simon Forman decided to cure his own illness by looking to the stars. And it seems to have worked. So he sets up practice, reading the stars to cure a range of illnesses. The problem? He’s selling himself as a doctor, but he never studied medicine. 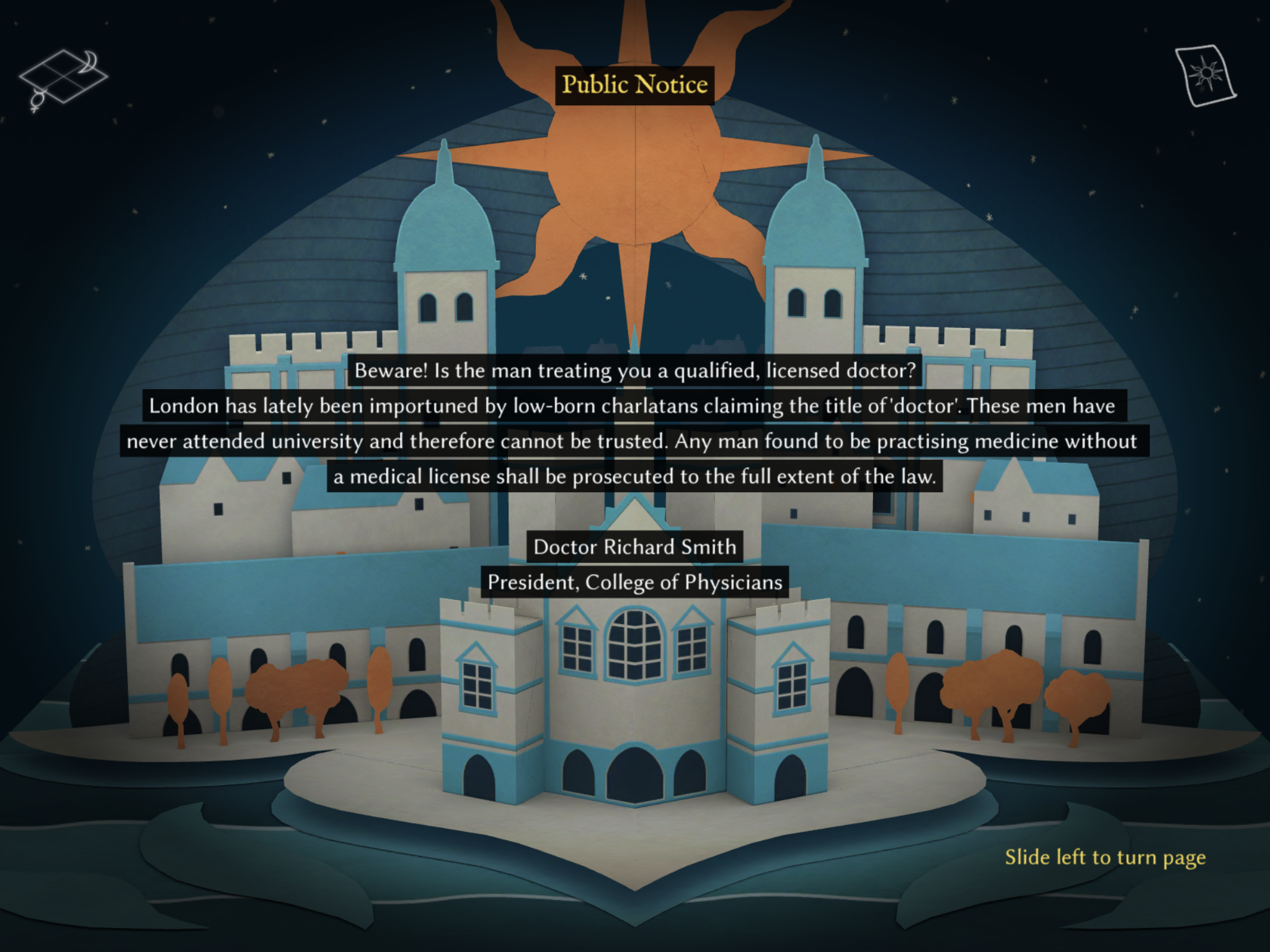 The police have warned the public about people like Forman, and if they catch him they would undoubtedly arrest and charge him. There is a way around this, as Forman needs to get at least eight of his patients to write a letter of recommendation. This will give him the chance to become a medically recognized doctor; for now, he’s operating illegally. It’s a true story that seems insane when considering modern science, but it didn’t seem so crazy four hundred years ago.

Astrologaster is based on Forman’s tale and Horay astrology, which uses a square chart versus the modern circular one. The developer clearly takes great care with accuracy, both for historical events and star charts. They used real star charts from the exact date and time the consult is said to have taken place. Terms common to the late 16th and early 17th centuries are abundant, such as “chundering" instead of “vomiting." There’s even a research team from the University of Cambridge employed to ensure historical accuracy. Every bit of the game is clearly built with the same love and care as the story, especially the music (which I’ll get to a bit later). 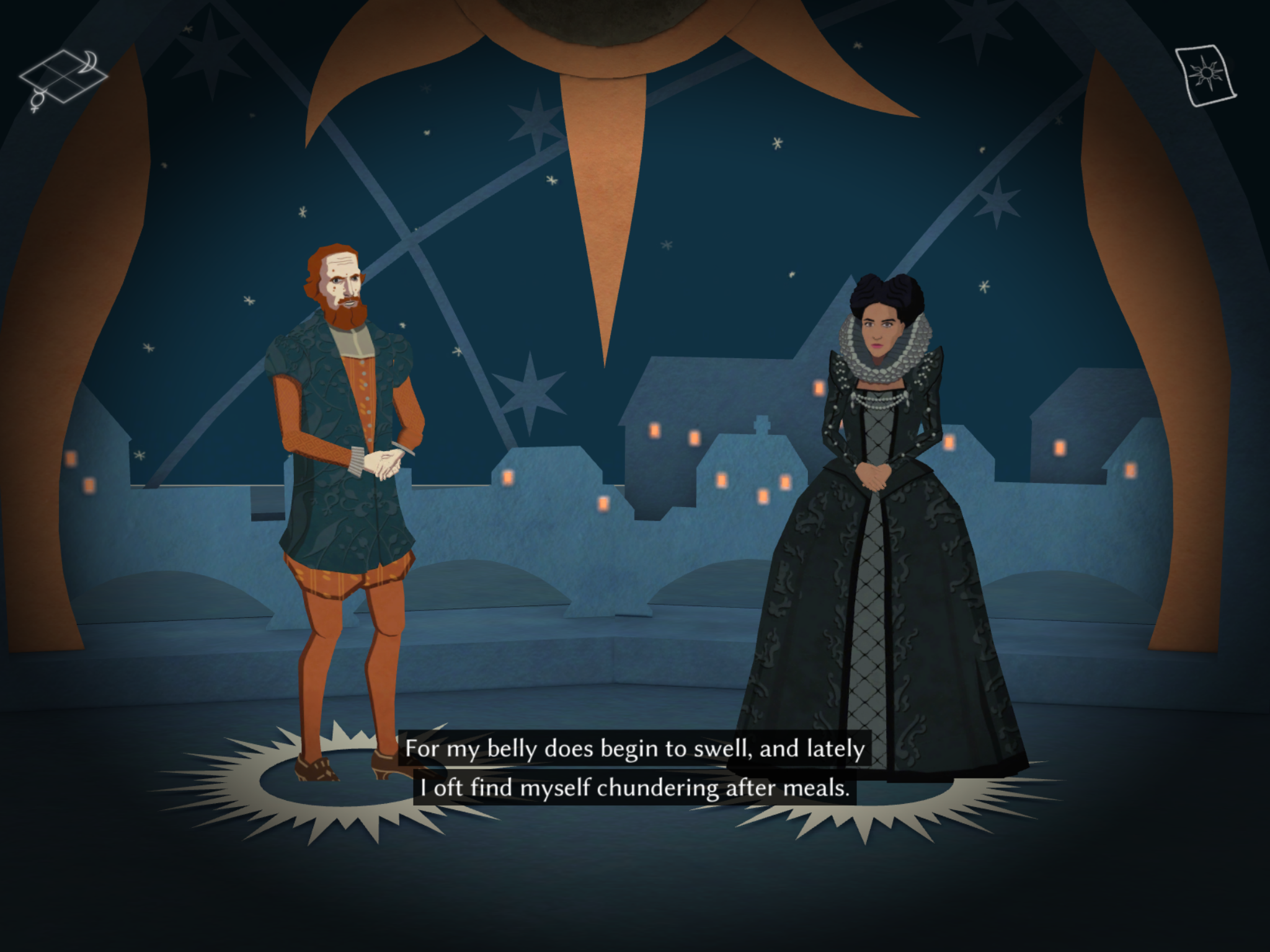 Each case follows the same order of events. It begins with the little ditty, then the “doctor" and querent discuss the symptoms. You then read the stars and choose the reading best suited to the situation. Your patient will react before you open the case’s summary, complete with the querent’s case history. To end the case, you’ll see how close you are to receiving a letter of recommendation from them.

I’m about as qualified as Simon Forman to be a doctor, and I’m equally confident in my ability to diagnose these digital querents. To “read" the stars, you choose an option and follow the path it highlights. Do this for all options (between two and four), and make your decision. Diagnosing becomes more complex as the story progresses. Each patient has their own quirks, and you’ll have to take them into account when making your decision.

Some of the diagnosis names (again, too zany to be anything but true) make me giggle. Call me immature if you must, but a diagnosis dubbed “Dropping Down of the Piss" is just a hoot.

Forman has 14 patients in all. Each character has their own voice, personal background, and personal reason for seeing the good “doctor" to begin with; their histories are on par with modern soap opera tales. But a remarkable amount of it is true. Many patients were Forman’s real querents, including feminist poet Emilia Lanier. 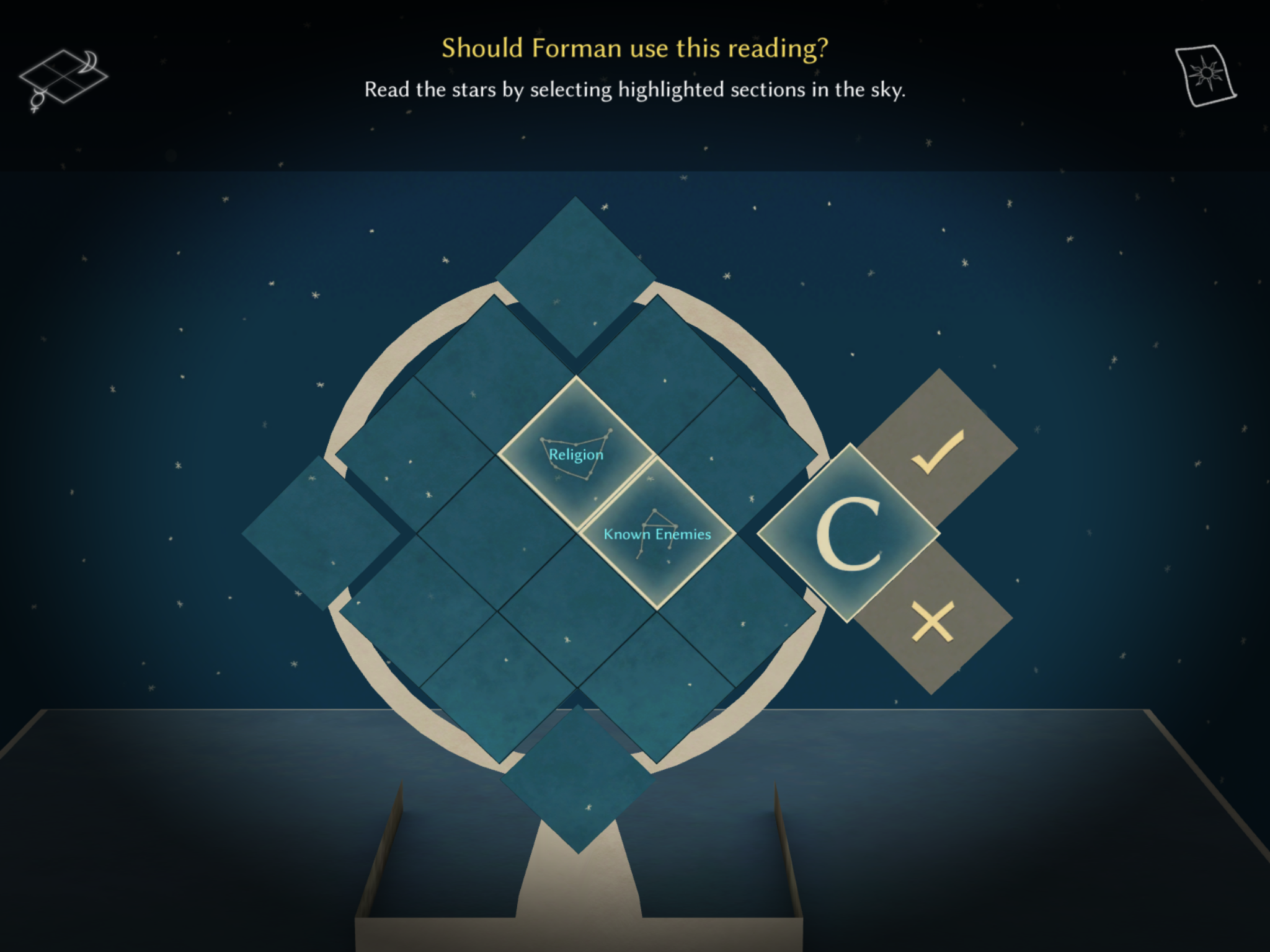 In addition to health issues, querents may also seek life advice. Thomas Blague, a minister, is all about gambling money on investments. Emilia Lanier enquires about her writing career.

Forman had an unfortunate habit of sleeping with his lady patients, and this digital representation has similar habits (although they’ve been toned down a bit). Case summaries state whether or not Forman has sex with said patient: “Coitus post consultation." A very important note, indeed, considering the number of pregnancies he deals with. 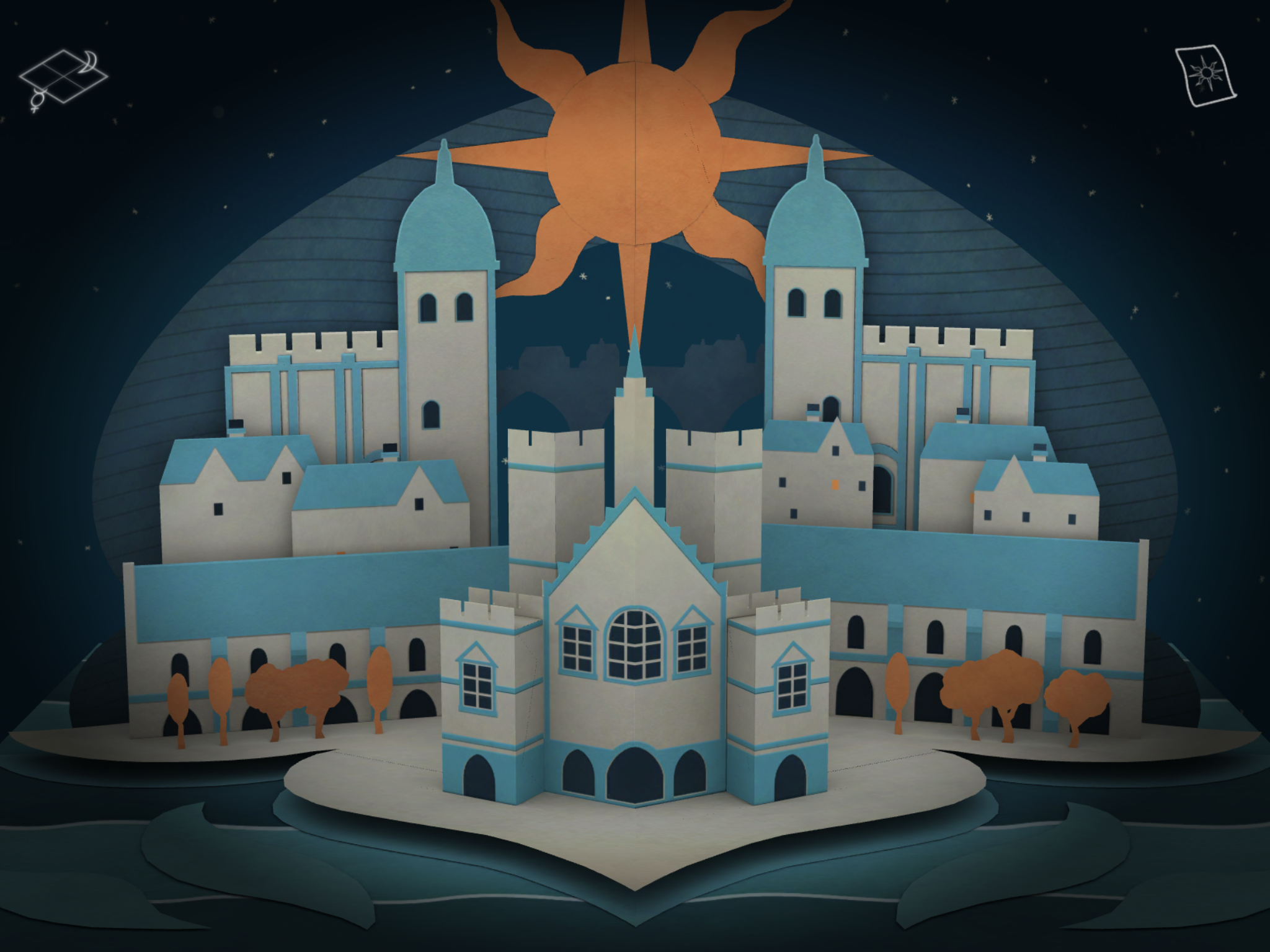 The Astrologaster story advances through an awe-inspiring pop-up book mechanic. It’s actually enjoyable, swiping and watching one story collapse and the other bloom right in front of you. It’s a genius way to progress a linear story, just like a pop-up book would, and it should look quite familiar to fan’s of Nyamyam’s previous release Tengami ($4.99). Indeed both games use the same game engine.

I’ve raved about many aspects of the title – the historical accuracy, the outlandish story, the large cast of characters – but I haven’t gotten to my favourite yet: the music. Each consultation is introduced with a lovely rhyme, called English madrigals. They consist of witty words on a background of hymn-like music and vocal tones. Each one is a masterpiece in its own right. 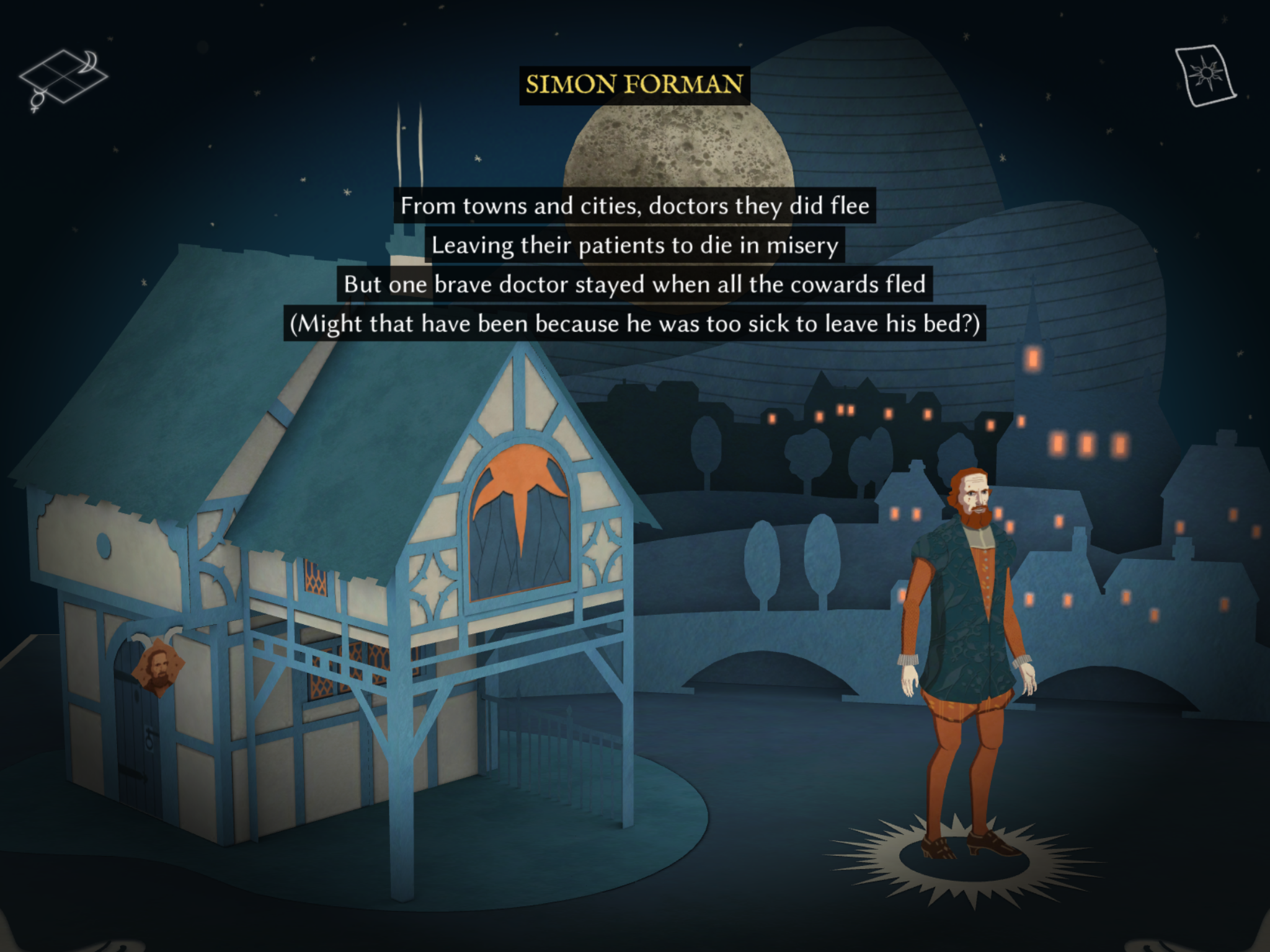 There is no reason to quickly read the dialogue and rush through the game. It is just so enjoyable to stop and listen/look. You begin to notice things like how the clothing moves and minuscule facial reactions.

I feel the need to personally thank the developer, Nyamyam, for creating Astrologaster. I learned a lot from it, and now want to talk about it with everyone I know because I’ll seem so smart, knowing all about this obscure British man from the 16th century. Not only that, but the game is an experience in its own right, with the madrigals and artwork creating something wonderfully unique. I cannot rave about it enough.