Sci-fi is a fascinating genre, and space exploration is a natural extension of the theme. Slightly different, however, is colonisation. Despite its infrequent appearance in games, colonising new planets is a wonderful, completely unsurprising, premise for a strategy game. Not to let a good idea go to waste, the industrious BrainGoodGames has delivered Solar Settlers ($3.99), and mixed in cards and a plethora of races for spice.

While the art is a bit plain, don’t let that fool you! What Solar Settlers lacks in visual flair it more than makes up for with a variety of cards and a different experience each game; nevermind the strategy behind actually winning. Unfortunately, such strategy seems to be hidden for a disappointingly long time despite the inclusion of optional placement matches. This is likely due to the ranking system, which is intended to provide enjoyable matches and replayability alike by matching skill with challenge. For quite a while, though, this did not work for me.

Actually sitting and playing Solar Settlers is quite fun. A single match can range from a five minute brain tease to a twenty minute exercise in mental gymnastics—although the latter is admittedly far more common after unlocking expert difficulty. In normal mode, matches tend to require minimal strategic thought, instead presenting something that could be considered a puzzle. What do I mean by that? See, in normal you tend to have an abundance of resources—an abundance of hydrogen, of oxygen, of ore, and of cards. As such, it’s less a matter of planning this turn, next turn, and maybe a turn or two after so much as looking at your hand and the board—the colonists, and the planets you have discovered—to work out how make the most out of what you have and, ideally, win.

Expert, on the other hand, unlocks at level ten and offers a grueling experience that requires much more planning and a better strategy than “Let’s throw stuff at the wall and see what sticks.” To achieve this radical shift, two changes are made: Settled colonists generate oxygen on turn, and exposed colonists require twice the oxygen to survive. That’s it. Those two changes turn oxygen from a minor annoyance into something that seriously limits growth, requiring constant maintenance and a decent plan of action. Ranks are not carried over between expert and normal, and for good reason—they are simply not applicable to each other. Thankfully, expert mode is a toggle that can be switched freely between matches in the options menu, not a permanent change. 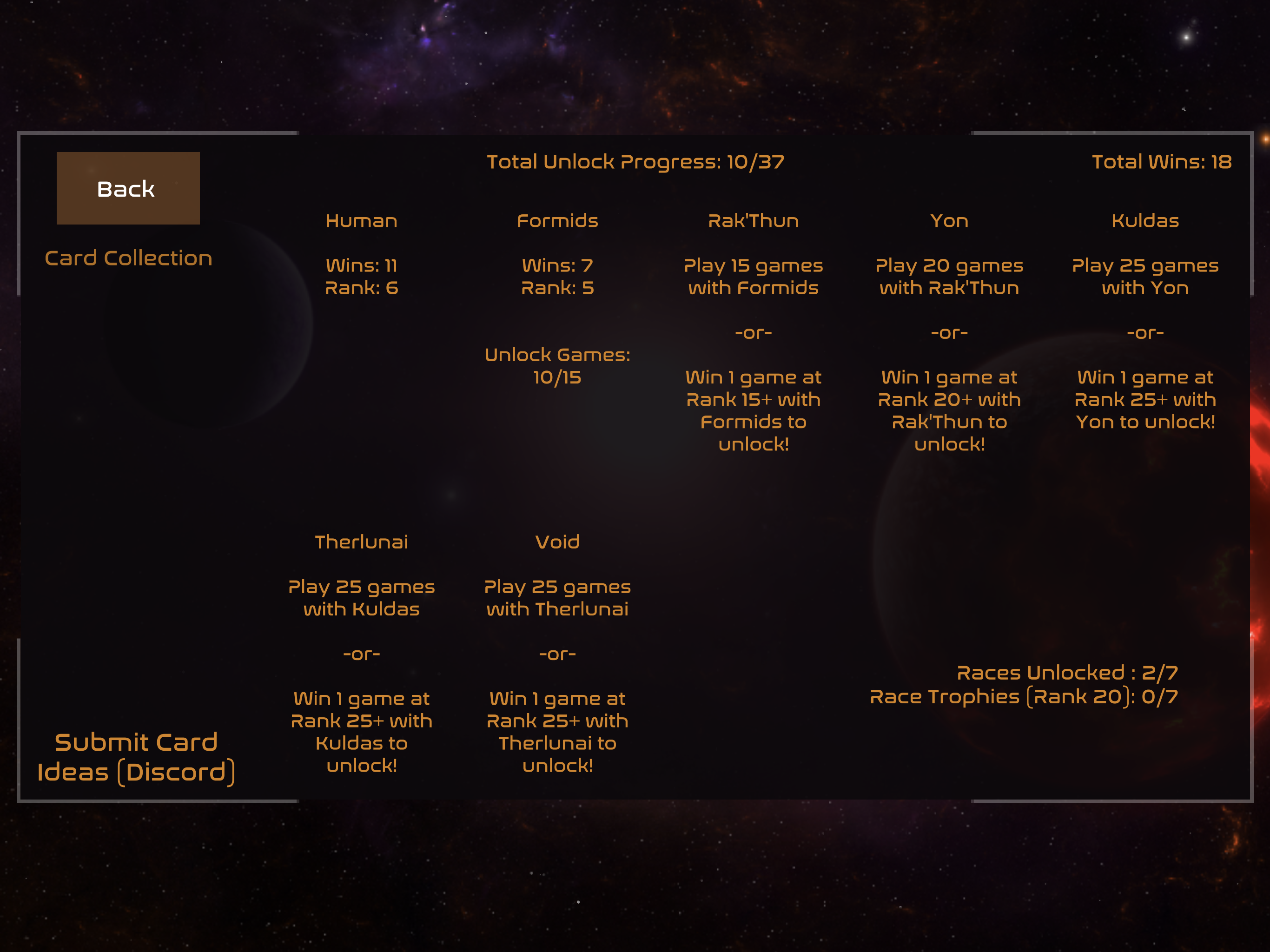 Digging into the actual meat, gameplay revolves around settling colonists into their permanent homes throughout a new solar system. Sounds pretty simple, right? Aside from being millions of miles away in a little metal tube, the necessity of having to harvest materials to build habitats, the hydrogen to move, and enough oxygen to not suffocate, it is! It’s also quite relaxing. There’s one more layer, though: Cards. Cards are not drawn at the beginning of each turn, they are produced by a variety of planet upgrades (and a home world, or starting planet, but that’s neither here nor there), earned from goals, or simply received by salvaging other cards. But, however they are gained, they are always used by either playing to a tile on the board for a variety of benefits, or by tapping and holding to dismantle into a material, oxygen, hydrogen, a new colonist, or another card.

While some cards can be played immediately on some or any planet or tile, others require resources—usually ore, but sometimes oxygen or hydrogen instead. These resources are not simply delivered, however. No, they must be earned by the hard work and occasional death of your settlers. They can be gathered from a variety of planet tiles, but those planets must first be discovered—you can’t mine ore from a water world, nor can you gather oxygen from a gas giant or hydrogen from a jungle planet, and you probably won’t have everything you need immediately. Each planet has two resource tiers which offer different benefits for harvesting. A rock world, for example, typically yields one ore and one hydrogen when harvested with a single colonist on the tile, and two ore and one hydrogen when there are two or more.

Mixing the proper amount of exploration and resources, especially card draw, is essential to establishing a stable colony. During my play, particularly on expert, I found that although oxygen was a definite priority, the real difficulty was in finding the cards I needed. While space stations, artificial worlds, and planet upgrades are certainly helpful, Solar Settlers is a game about settling colonists. Turning productive colonists into happy, settled, colonists is quite a tall order without habitats, though, and that requires a bit of luck. As such, it is important to pay attention to the current goal, collect the occasional card draw, and hope to discover free hab units to make up for bad luck. 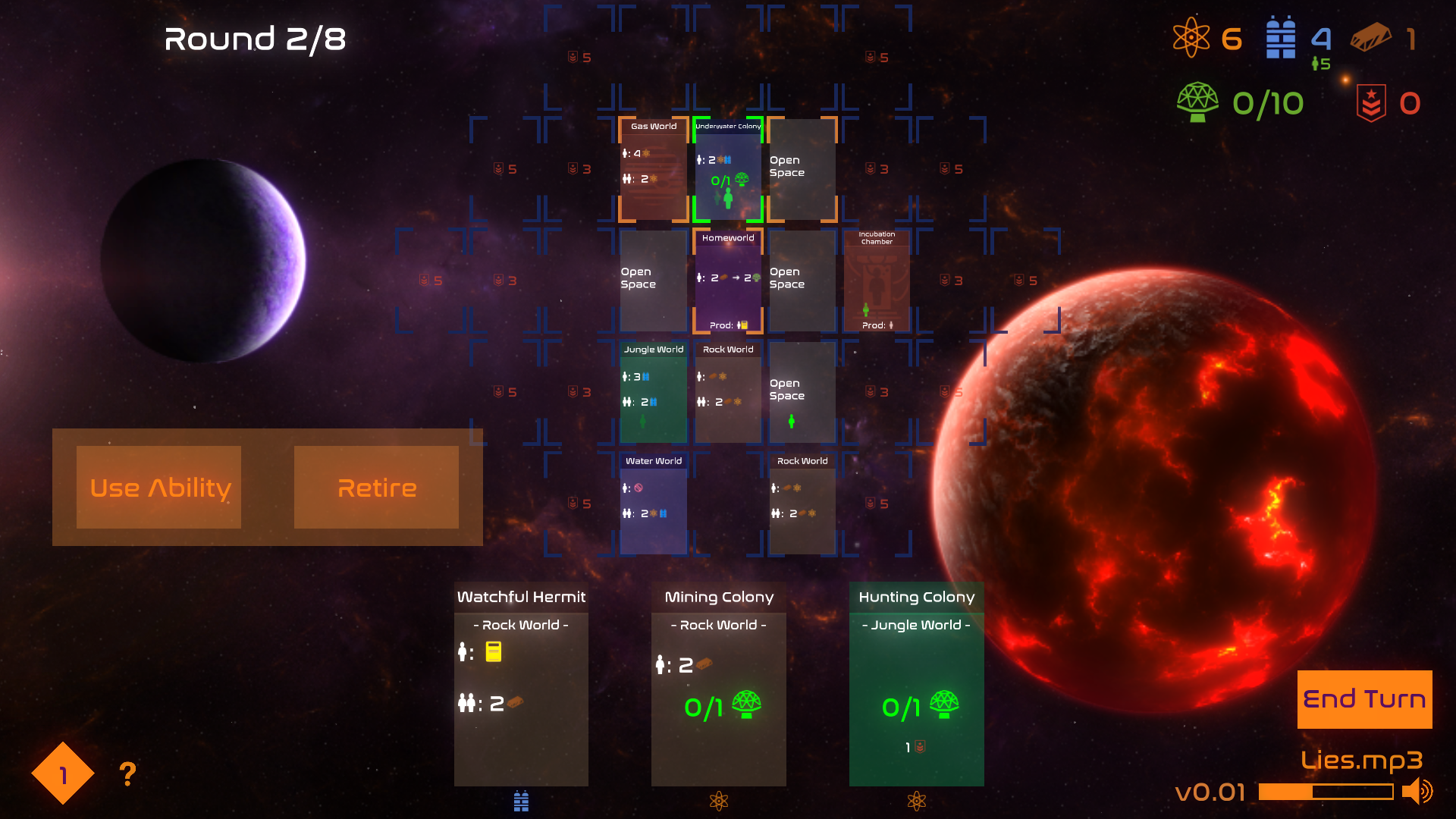 We’ve come so far and I haven’t even touched on the different races yet! While the basic gameplay is the same (all races need oxygen, hydrogen, ore, and a place to live), there are subtle differences in how those needs are met. For example, humans (the basic race) tend to have production-focused homeworlds: Produce a card, some oxygen, a colonist, a this or that or the other. Formids, on the other hand, reward planet upgrades, and others reward exploration or other focuses. Each race plays just a little bit differently than the others, and has a variety of specialised cards unique to it that benefit from their gimmick. While it is not necessary to unlock, play, and master every race… what’s the fun in ignoring the options? Variety adds spice!

In terms of flaws, there aren’t very many. There’s the normal difficulty, sure, but I half wonder if that wouldn’t be solved by just playing more, and there’s always expert mode for a challenge anyway. Outside of that, the artwork, while not bad, is not something that could be considered a masterpiece. Fortunately, it is only really prominent in the main menu, although it isn’t easy to ignore. Moreover, this isn’t a game you want to sit and play three, four, five matches at a time. It gets a bit repetitive, and the replayable veneer starts to wear thin. It can be done, but it’s better enjoyed with breaks between games.

In sum, Solar Settlers offers diverse card sets for a variety of races to colonise new solar systems. While this requires careful thought and strategy in expert mode, it tends to be rather easy outside of it, despite its ranking system. While I enjoyed playing the game as a whole, I found the best experience was in choosing a random race and playing on expert, although that resulted in quite a few losses. While it does have flaws, they are few and easily overlooked. Solar Settlers is an easy recommendation, and one I make whole-heartedly.