Hello gentle readers, and welcome to the SwitchArcade Round-Up for April 15th, 2019. We’re kicking off what promises to be an absolute thriller of a week for Switch releases, with titles like Final Fantasy X/X-2 and Cuphead mere dozens of hours away at this point. Strangely enough, however, there are no new releases today. That means we’re instead going to look at a couple of news bits, the latest sales information, and a review of one of last week’s releases. Let’s serve it up!

While I’m not going to go as far as to say the company has nailed it every time, Nintendo has generally done a really nice job with post-release updates for its Switch titles. Mario Tennis Aces has seen particularly good support, with a bunch of new stuff added to the game for free since it released one year ago. The latest update adds the new Ring Shot mode to the game, which sees you trying to hit the ball into rings placed around the environments. There’s also a wah-mazing new opening movie for the game’s story mode. The show isn’t over yet, either. New playable character Dry Bones will be coming soon, and at least one more character is scheduled for early summer release.

Check Out the Reveal Trailer for Kitana in ‘Mortal Kombat 11’

There’s just a little over a week to go until the release of Mortal Kombat 11, and it’s safe to say that there aren’t too many surprises left to be revealed before launch. Well, apart from how the Switch version looks and runs in general because we’ve only seen about twenty seconds of it so far, but I’m talking about characters here. The thing with Mortal Kombat is that you can never be too sure if a character will reappear in a new game or not. The series has never been shy about making very bold choices with its roster for the sake of the story, so while in any other series it would be a non-event that a character as important and popular as Kitana is appearing in the new installment, in Mortal Kombat you can’t know until you see the character in action. Which you can do right now, thanks to that trailer up there. Warning: it is Mortal Kombat. Lots of gore, albeit mostly insect-creature gore this time. 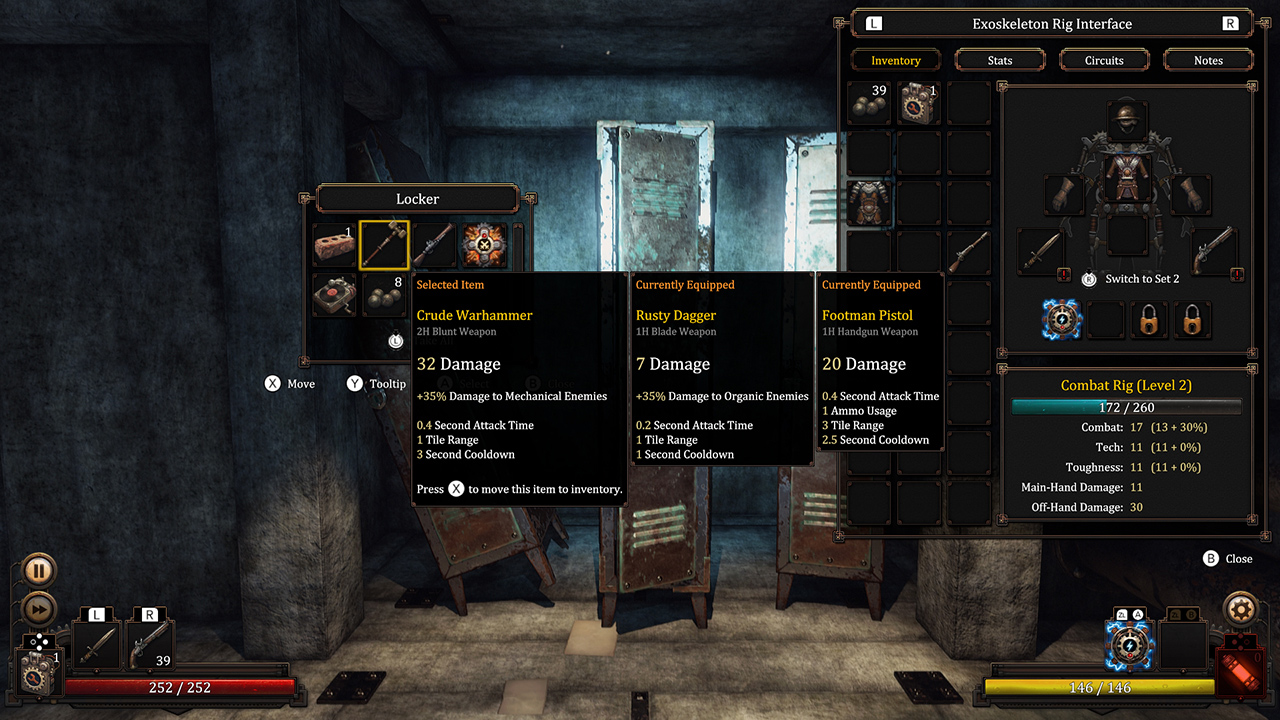 In the grand scheme of things, there have been an awful lot of first-person dungeon crawlers released. The genre was one of the most popular in the early days of computer gaming, and although it went dormant for a while in the late 1990s, the last decade has seen it come charging back. One certainly does not need to look far to find a turn-based first-person dungeon crawler these days. But sandwiched between the glory days of Wizardry and The Bard’s Tale and the rise of more action-based fare like Ultima Underworld and Deus Ex, an interesting half-step briefly flourished. The real-time first-person dungeon crawler was popularized by the iconic Dungeon Master, and for a short time this kind of game was all the rage.

Unlike its turn-based forefather, the realtime variety of the genre hasn’t seen quite so many willing to follow in its footsteps in modern times. Sure, The Legend of Grimrock and its sequel are out there proudly serving that niche, but it seems like very few developers want to take a gamble on this hybrid genre. Fewer still will ever venture outside of the well-established fantasy setting that so many RPGs cling to. So in at least a couple of points, Vaporum is a noteworthy release. There’s at least one other game in this sub-genre on the Switch, but it’s very diligent about coloring inside the lines. Vaporum largely ditches swords, sorcery, and musty dungeons for crowbars, pistols, and steamy rooms of machinery. In spite of that, the game mechanics are extremely familiar for anyone who’s had a dance with Dungeon Master or its ilk. 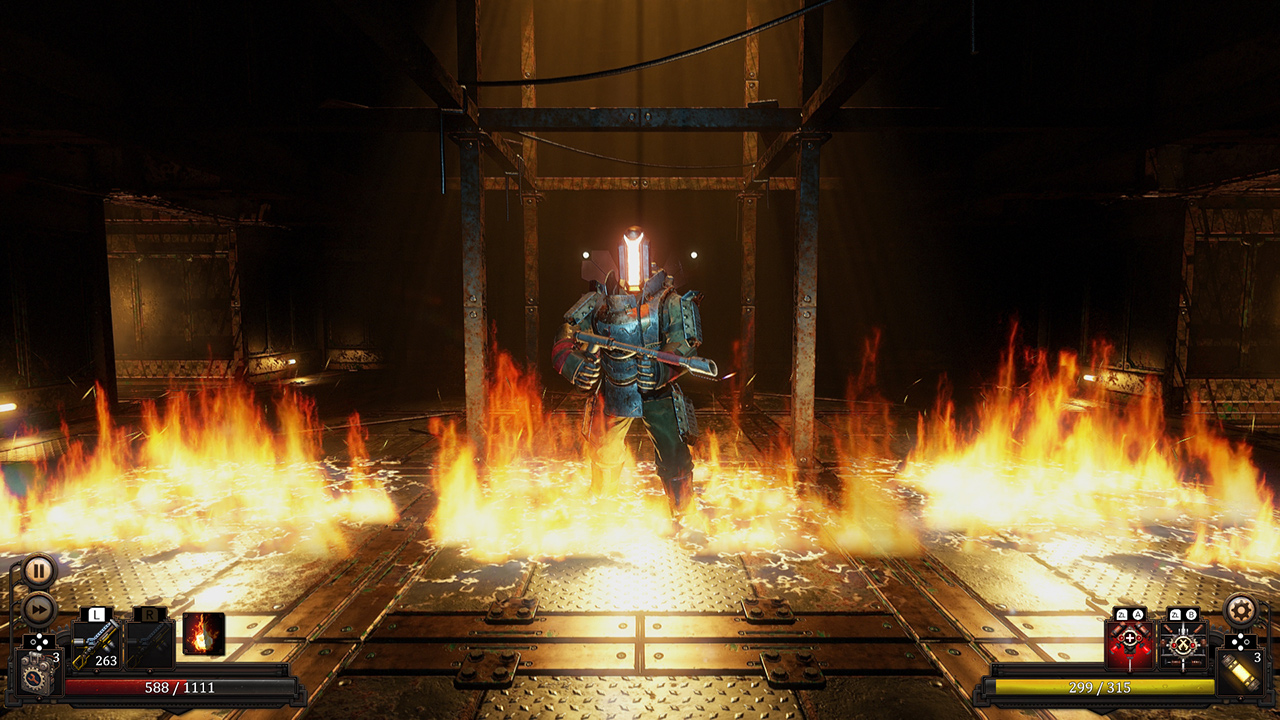 The good things you can look forward to: decent level designs, a fantastic atmosphere, tense battles, and interesting puzzles. The less-than-good things you can look forward to: a lack of enemy variety, an overwhelming feeling of repetitiveness in the environments, some very non-intuitive controls, and teeny-tiny text if you’re playing undocked. The steampunk setting is certainly a fresh lick of paint for the genre, even if steampunk itself isn’t quite as unexpected as it once was. The game certainly does its best to get you invested in its world too, with plenty of bits of readable lore and recordings painting the vibrant picture that the game environments can’t always manage to.

You’ll only be guiding a single character in Vaporum, cutting back on some of the chaos of trying to manage a full party in realtime. The unfortunate consequence of this is that while you have a lot of options open to you for that one character, your battle strategies are quite limited. When combined with the relatively low variety of foes you’ll be facing, it means that combat can quickly become rote. Never easy, mind you, as you have to consider the environment around you and the number and types of enemies you’re facing, but once you’ve nailed down a couple of strategies, it’s just a matter of outlasting the opponents. That applies to the start of the game and the back stretch equally well. 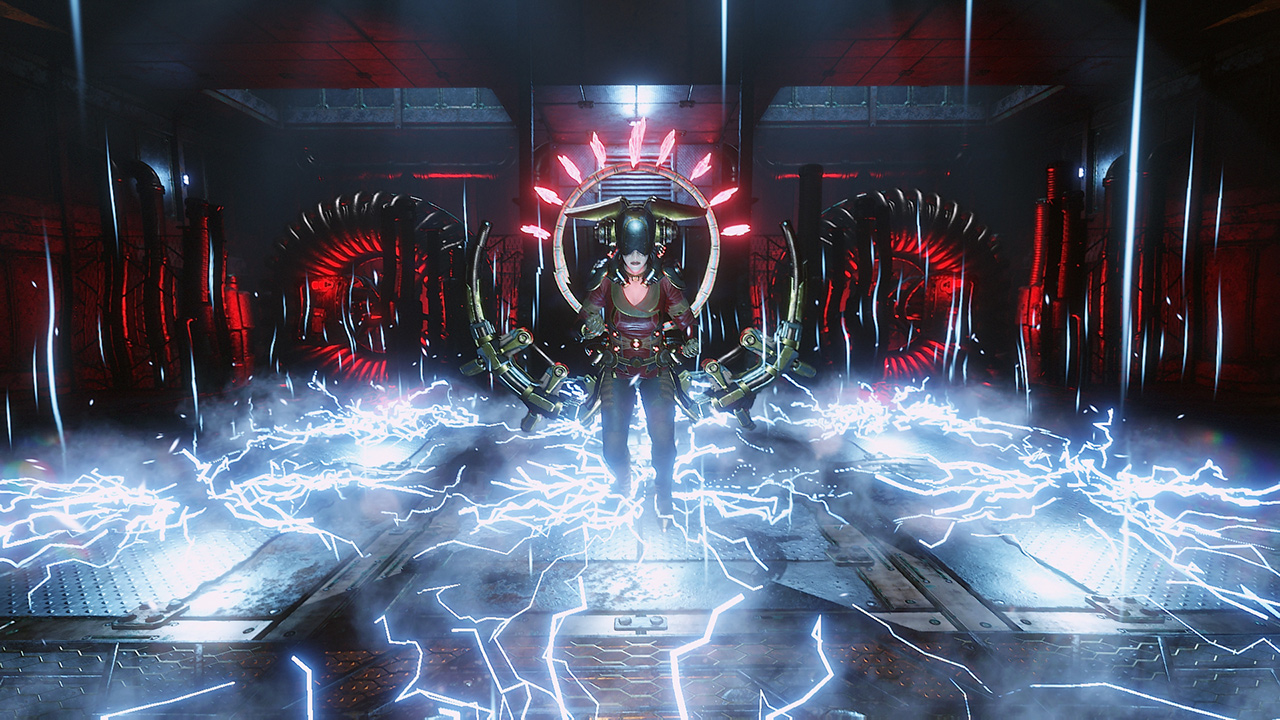 But you know, who really comes to this genre looking for quality combat? Nobody played Dungeon Master because they liked doing the combat waltz for every orc they stumbled across. No, it just has to be good enough, and I suppose that Vaporum is at least good enough in this respect. The main star here has to be the dungeon floor designs and the puzzles contained within. If you get that right, everything else just falls into place as it ought to. And yes, Vaporum generally delivers on that end of things. There’s nothing exceptional or revelatory here, but it’s certainly nothing you would kick out of bed for eating crackers. You’re going to be doing largely the same things you do in most games of this sort, but it’s clearly a game designed by students of the sub-genre.

As such, I believe this game has the strongest appeal to three broad groups of players. First, if you’re the sort of person that can’t get enough of realtime dungeon crawlers, you’ll be quite satisfied here. It’s not a must-play but it does its job well enough that you’ll enjoy yourself. As for the second group, I think anyone who hasn’t played a game like this before and wants one to try out on their Switch would do well to pick this up. Finally, if you’re a sucker for steampunk and want to dive into a surprisingly immersive world that revolves around that theme, Vaporum will likely be up your alley. 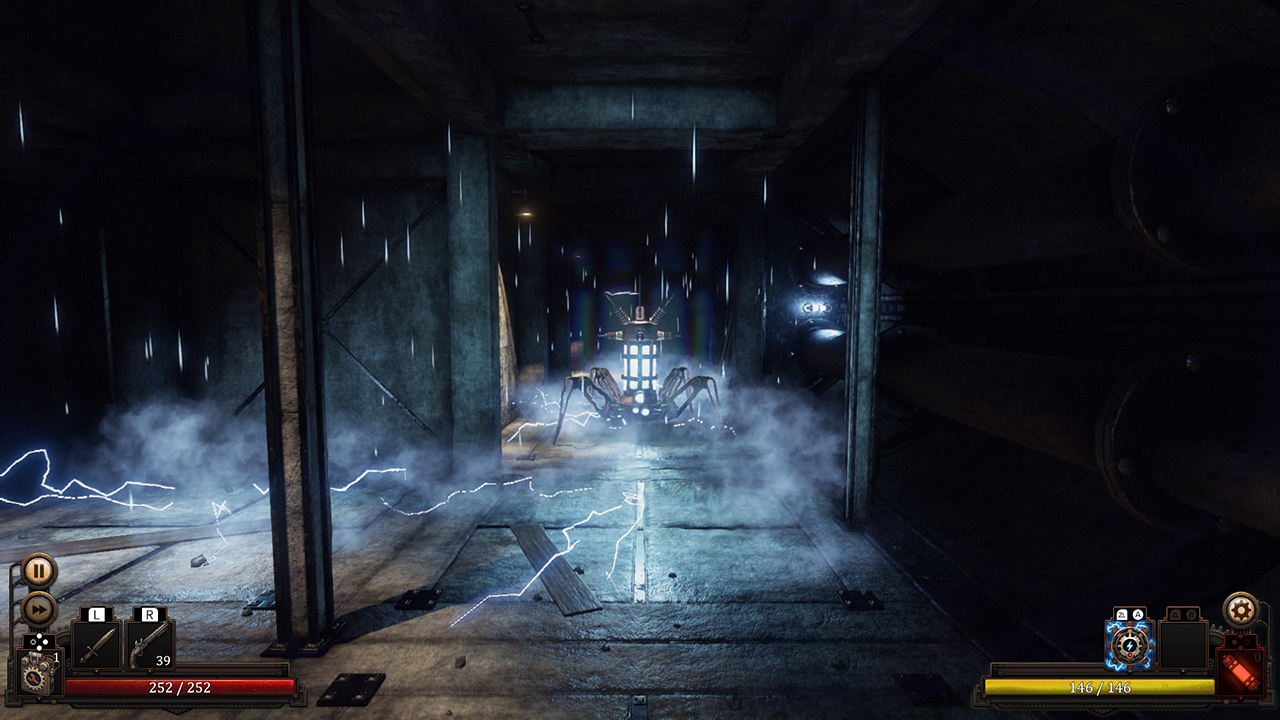 As for accessibility, there are enough options here that your skill level isn’t going to sink the game no matter how inexperienced you may be. I think anyone can safely jump in here, and its semi-realtime nature may make it more palatable to those who find vintage RPGs to be snoozers. The game looks and sounds quite good on Switch, and while the visual variety leaves much to be desired, there is a certain beauty to the game in places. While I recognize there wasn’t much to do about the controls given its mouse-and-keyboard origins, I do wish that the text size wasn’t so small in handheld mode. I don’t know. Vaporum‘s flaws are clear, but I really enjoyed spending time picking through it anyway. A solid game, if not necessarily a great one.

Mmm, now those are some good sales, friends. Diablo 3! Crash Bandicoot! Any LEGO game you could ask for! Even some nice lesser-known stuff like The Bug Butcher and Battle Princess Madelyn. Yes, you could certainly spend a lot of money trying to save some money today. Meanwhile, in the outbox we’ve only got a couple of games, but this is your last chance to grab Yet Another Zombie Defense HD during its introductory sale price. I mean, if you want it. 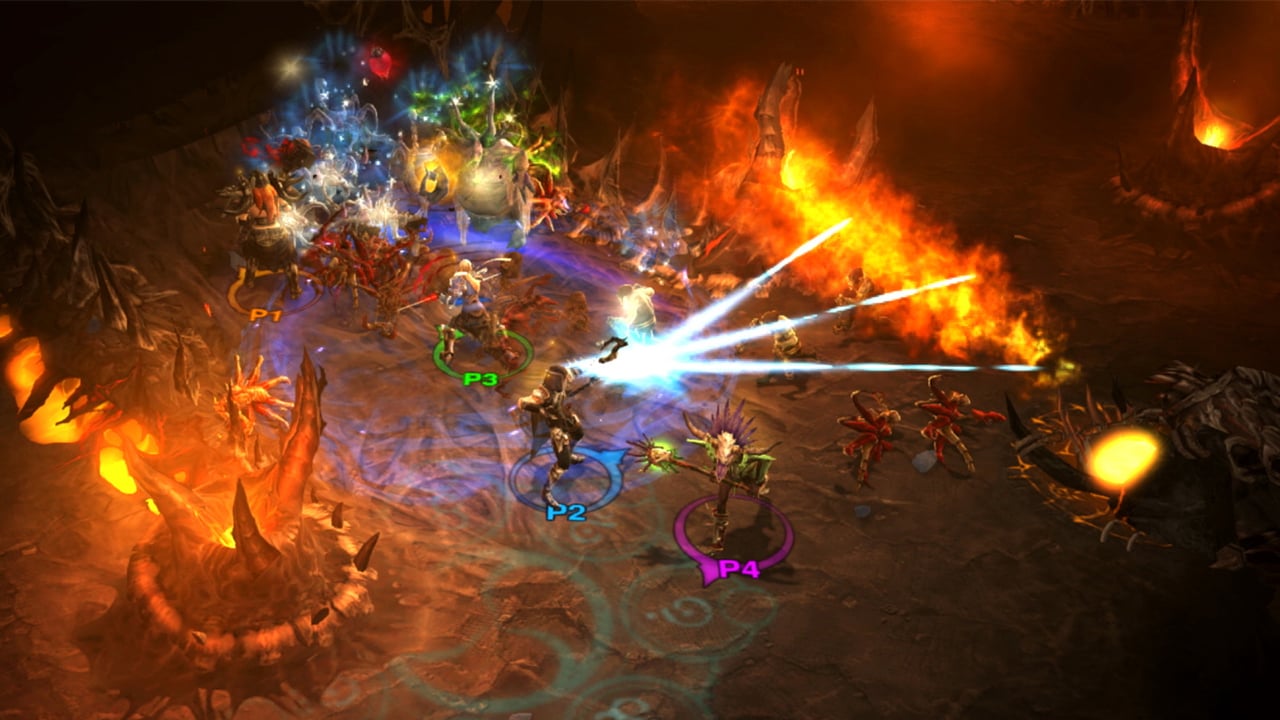 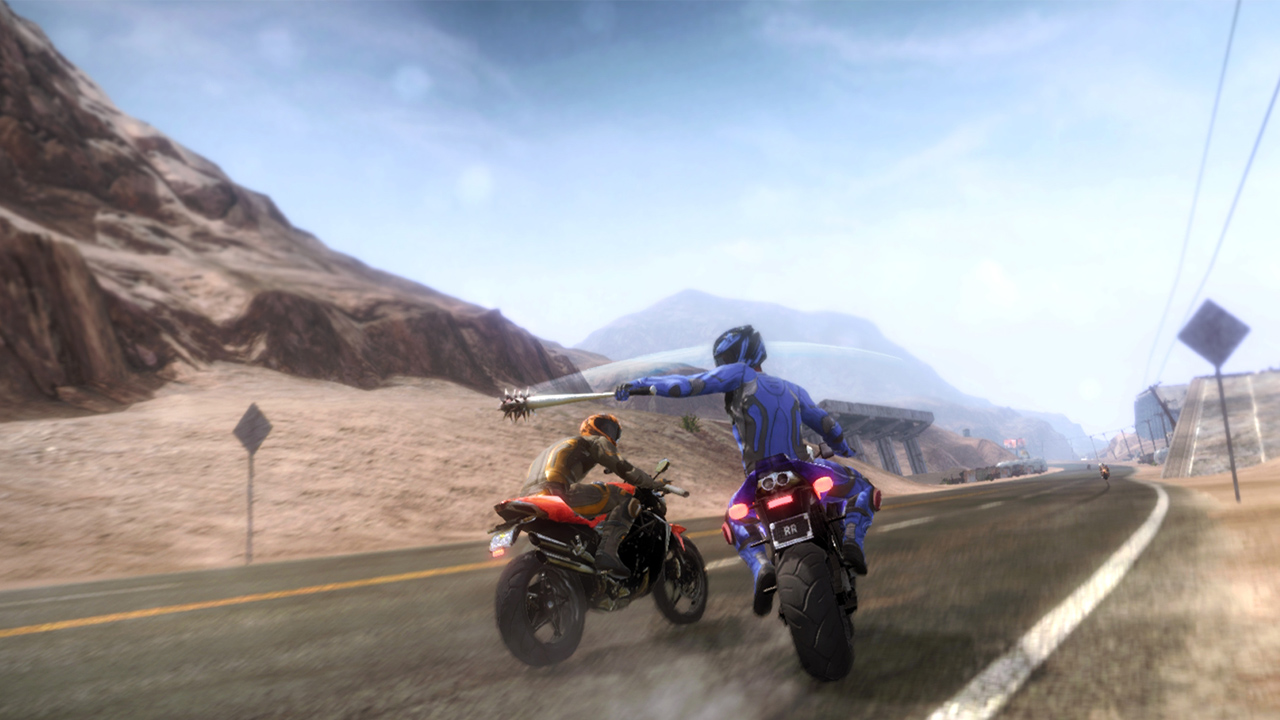 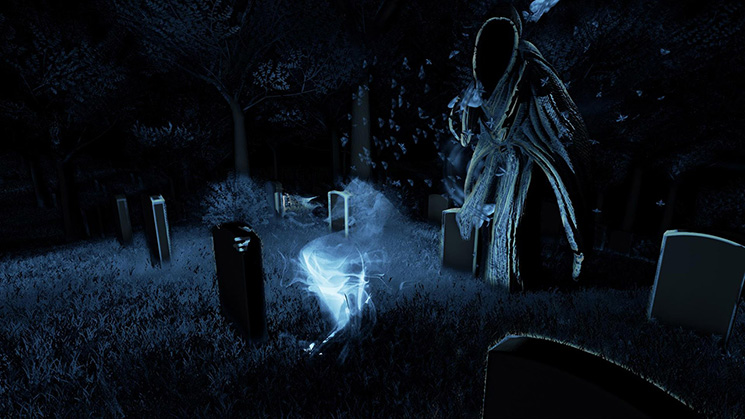 And that’ll do it for today’s SwitchArcade Round-Up, friends. We’ve got a bunch of new releases tomorrow to look at, and I’ll probably have another review for you all as well. You know what that means: you simply can’t miss it! Unless you have an important tea party or something! I do not like to interrupt important tea party schedules! As always, thanks for reading!